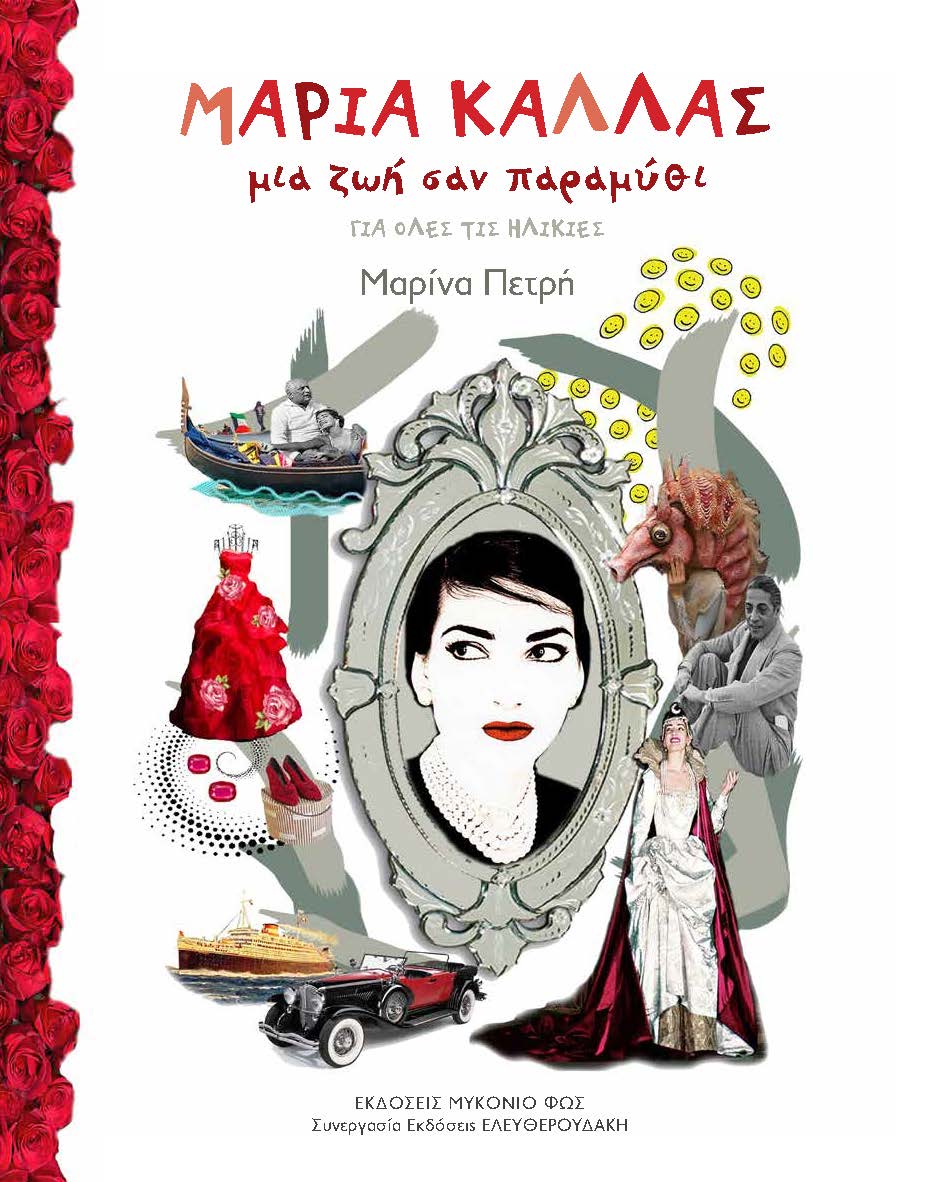 Publications “Μυκόνιο Φως” and the painter and writer Petri Marina invite you to the presentation of the book Friday 8 Of March 2019 in Polis Art Cafe……
The new book by the painter and writer Marina Petri entitled "Maria Callas a life like a fairy tale" is a comprehensive biography of the great Greek soprano in a performance for children. The book is aimed at adults, as briefly will read the story of Callas and give rise to search and other details of her life.

Into 80 pages, with a shocking pop art illustration Photoshop, the book carries the new generation in the form of Callas, and a sense of innovation diva brought the era of. The plot and illustration work artfully presented wise of phrases , but words and other important people who found and worked beside her as the painter Yannis Tsarouhis, director Pier Paolo Pasolini, actress Greta Garbo, the president of America John Kennedy and others. The idea of ​​the book was launched on the occasion of the efforts and activities of the "Greek Association Maria Callas" to create the Maria Callas Museum in Greece in order to survive in the new generation of work and life

The book will speak the:
Helen Grypari, former president of the Young European Federalists in Europe, the importance of major national personalities of each country, their work as Maria Callas .

Dimitris Lymperis, art lover and philosopher, for Maria Callas and women contribute to changing the history of mankind.

Followed by theatrical narrative, optiakoustika effects, edited under the direction of Marina Petri. In acting performance in the role of Maria Callas Danae Neonakis , yield many roles Matina Kopsolaimi.

Short CV
The painter and writer from Mykonos Marina Marina Petris Petris born in Graz, Austria, hailing from Mykonos. He grew up in Athens and Mykonos .. Lives and works in Mykonos, Piraeus, London, Berlin.
Studies: Athens School of Fine Arts graduate .Ekane: the Royal College of Art -London (Master of Art), Business administration in the HMA (Mykonos - Athens) and extroversion( exports) and HMA

He has been involved with the organization of cultural and tourist events in municipalities and other entities in Greece and abroad,radio programs for Hellenism abroad . It has established and distinguished for kiosks and printed material for tourism Mykonos and tourism exhibitions in New York and Athens. The represented his country to Greece with three short films, at festivals in Europe. From 1994 up to 1998, worked in Mykonos the art galleries and cultural activities MONO ENA.

The 2004, created versions of children's books and cultural MYCONIAN imitationIn order to disseminate and tradition of cultural and historical elements of Greece to younger generations. It is one of the most important contemporary artists of Mykonos. Offering the island, active by 19 years, field of culture with ideas and processing cultural organizations ,contributing to the promotion in Greece and abroad. From 16 years publishes in newspapers, publishes books and magazines. six poetry collections issued, fifteen children's stories and published a considerable literature texts folklore and history of Greece.

Tales of Viewed with performances and performances for children in Veakio Theater, Michael Cacoyannis Foundation, the Book Arcade, Arsakio Athens and other standards schools, school and cultural institutions in Greece and abroad. It has created events for the Olympic Games in various municipalities, for 170 Greece abroad.

The artistic work It has been presented in Athens in, Piraeus, Mykonos, Thessalonica, London and other cities in England, Berlin and other German cities, Venice, Amsterdam, Damascus, in countries such as Russia, USA, France, Serbia, Japan, in 65 individual and 48 team assignments. Peiramatizeteai with various types of art. It has gotten many awards as: A praise in poetry the Union Committee for International Recession and Peace by John Rizzo, Nikiforos Vrettakos, and Taki Sinopoulos.

Children's books proposed twice state prize. Work has been included in the UNICEF cards. Honored by the literary magazine "Deucalion Thessalos" with an award for her contribution to the spread of Greek culture in Greece and abroad. The museum Van Gogh in Amsterdam he's got, recently, include work in gigantic installation video wall at the museum entrance, along with international artists projects, such as: Roy Lichtenstein, Bruce Bodden, Lacroix Benedicte, Andy Alcala, Joshua Luis Simon, Jane Perkin etc..

Coronavirus Travel – Tour Operators: The three big tour operators give a positive signal for the start of the season in Greece

The start of the tourist season earlier than originally estimated, at 15 June, with the opening of seasonal hotels and the resumption of direct flights..
Read more
What's Hot

German Foreign Ministry protests Berlin over Ankara, for the incident that took place in April in Evros, when Turks ...
Read more
Airplane - Flights

Coronavirus Travel – You're right: Imported cases do not scare us - We will not hesitate to stop tourism

"It simply came to our notice then, since there will be no mock tests on tourists before they come to our country ", said the professor of Infectious Diseases,...
Read more
View more