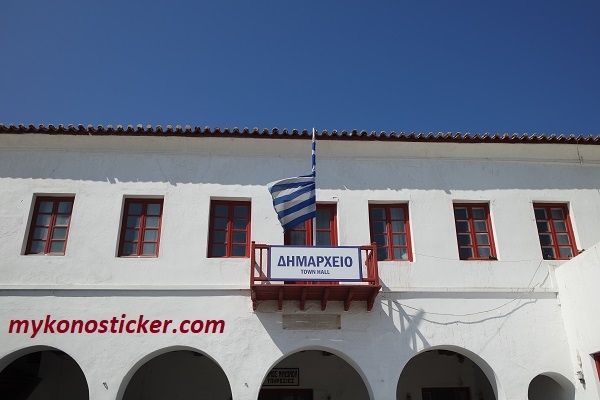 And I say with great surprise, because this party I have sufficient for all, to ensure petty benefits. Never but never expected to reach the point of opposition to caress the ears of offenders with expressions "sow winds, reap storms ", leaving vile and slanderous innuendo, instead unequivocally condemn and united this unprecedented attack on the elected representative of our island.

Such criminal acts must find us opposite. ledgers. Ie not only ordinary citizens, who from the first moment showed their reflexes and stood by us condemning violence, and the political representatives of the island and especially the opposition, which as I said to our great astonishment, not only deliberately avoided unequivocally condemn this fact, but rather some unfortunately shamelessly sought to exploit political crested the contested letter of KEPOM. This, Nevertheless, policy stance except unacceptable, It is unprecedented, since no previous democratic periods of our country and of our island.

Among others in this despicable letter KEPOM, noted with certainty, that the brutal and cowardly attack on the President of the City Council Miltiades Atzamoglou, not just about a case of robbery or beating, but something else… which is not clearly stated.

At this point I will say something more. Especially for Miltiades Atzamoglou such obscene and vulgar innuendo should not be drawn from KEPOM. On character alone, We all know very well, that Miltiades Atzamoglou everything,what he has to say it says outside teeth. None krypton under the sun so!

Same on you, Leaving such innuendo about Miltiades!!! Such policies letters containing such extreme attitudes and interpretations is completely irresponsible, dangerous, undemocratic and reprehensible.

The least we can do now is KEPOM ask an apology for what he had emitted shamelessly and unequivocally condemn the attack, without "although, but".

Regarding the substance of the case, Therefore now Justice, since arrested two of the three parties involved in the case, with one even considered profylakisteos.

We have got – both myself and the President of the Municipal Council – absolute confidence in the Greek Justice and are confident, that very soon the truth.

to, Nevertheless, να εξακριβωθούν και οι σοβαρές καταγγελίες της ΚΕΠΟΜ, convey directly to Syros Prosecution that letter, as they should immediately invite the head of KEPOM, he apparently knows more aspects of this case, but for other cases, which does not mention our natural!

Still further, on the occasion of the incident of attack, in the same letter that denounces KEPOM Mykonos are signs and wonders, there is inadequate policing, that there the night Law, that there is lawlessness and delinquency, interests that dominate the island, that threatened the democracy itself!

It is trite law also, that founding member of KEPOM serves as a senior government official SYRIZA with presence in major ministries and executives KEPOM have close political contact with Members SYRIZA Cyclades, but the present Government.

Hence any criticism KEPOM all these years the Government, its policies and its absence from the island;

Hence the KEPOM the attitude of the Government exempt from any liability, focusing only criticism of the Municipal Authority;

So cashing the KEPOM relationships and friendships with absent Government;

How much more obvious can become, that KEPOM Mykonos sacrificing protection for the sake of the image of SYRIZA, who as Government has enormous responsibilities for the inadequate policing of the island and the consequences thereof; A government which has not only completely seem unable to rise to the occasion and meet the needs of Mykonos, particularly in terms of public order and safety, but instead has stood hostile and biased toward the island, where the faces, as the hen chrysootoko, από την οποία ξέρει μόνο πως να επικαρπώνεται τα οφέλη της από τους φόρους και το ΦΠΑ που αποδίδουν στο κράτος οι επιχειρηματίες και οι εργαζόμενοι του νησιού μας.

The government ignores our continuous official requests for additional policing, which has made our Municipality with dozens of letters of complaints and lawsuits. Instead it provides the island during the summer months, όπου φιλοξενούμε συνολικά 2 million tourists, the same number of officers allocated by the government to guard a minister of the government of SYRIZA. A government if sent to the island every summer only half the police in relation to the levels of the hundreds of tax collectors sent to foroepidromi, we will face the problem of delinquency from the root.

Not so blind. Instead we struggle and strive. Clearly we face serious problems of policing and therefore eventual lawlessness and criminality and we are the first to have identified and moved institutional and not only, to immediately resolve the government. As tired world lack policing equally has angered and Municipal Authority. But the world is equally tired and heavy words and rants of prospective price of everything, who only know how to criticize on everything and promise.

Specifically, Opposition consultants of the island recently and new faces self-styled as benefactors, They have understood that populism in Greece easily finds listeners and following. But come that none of them we have seen over the years the city hall to propose solutions or assist in our persistent efforts to find solutions to the problems of the island. We accept criticism and seek cooperation, slander, Nevertheless, We will not tolerate.

Let's go now to the substance of the complaints alleged KEPOM:

1. Shoots alleged crimes and criminals without mentioning or naming all those dark interests that supposedly have turned the island into "male lawlessness"! Having not done so in their Communication, They do at least the data to the Prosecutor.

3. Satisfied with kafeneiakou type discussions, without proposing – as usual – no solution to the issues mentioned.

4. Does not exercise the slightest criticism and not claim anything from the government of SYRIZA, who has left the island 'naked' by police.

This is no time for evasive and vague complaints but findings. It is the time of the acts and substantive solutions.

For this reason we, as Municipal Authority, proceeded to specific operations and suggest concrete solutions to the Central State, the Ministries and the Prime Minister himself, by individual meetings, early as 2015, reaching even to update the Maximos Mansion with the Minister of State in 28.02.2018.

indicative, in the years 2017 and 2018 addressed the competent Ministries, Prime, the Chief of the Hellenic Police. Cyclades and the MPs Mr.. Nicholas Manias, Anthony Syrigos, Nicholas and John Syrmalenio Vroutsi:

6. The number of. prot. 232/11-01-2018 letter entitled "Immediate need for posting police at A.T.. Mykonos - Provision of residence ', which became a reference in the Greek Parliament.

13. The number of. prot. 7156/30-07-2018 letter entitled "Increased need for direct regulation of traffic along the entire length of your competence coastal road from Hora to Tourlos».

14. The by 31/07/2018 report of the Mayor of Mykonos before Mrs Misdemeanors Prosecutor Syria on repeated and continuous conducting crime, sygkoinopoioumeni to the Chief of Police.

15. The number of. prot. 7194/31-07-2018 joint letter of Mykonos and Santorini Mayors on "urgent issues in Mykonos and Santorini - call for staffing the security forces' addressed to the Prime Minister. Alexis Tsipras, If in sygkoinopoioumeni. Minister of Citizen Protection Mr.. Nico Tosca, Minister of Marine and Island Policy, Attorney Transparency and Human Rights, Minister of Tourism, the Regional Law. Aegean, Misdemeanors Prosecutor Syros, Misdemeanors Prosecutor Naxos, MPs N.. Cyclades, which became a reference in the Greek Parliament.

16. The number of. prot. 7195/31-07-2018 joint letter of Mykonos and Santorini Mayors on "Proposal for tax exemption / reduction is for rental housing to civil servants' addressed to the Governor of the Independent Revenue Authority,. George splashes, sygkoinopoioumeni to Deputy Prime, Minister of Finance, Minister of Tourism, the Regional Law. Aegean, MPs N.. Cyclades.

These documents were sent repeatedly even, in order to realize the magnitude of the problem created in the local Mykonos society but also the size of the defamation of our country in the midst of tourist season.

Not content to complaints and in meetings but in Ministries!

We hired a private guard service company, early as 2015, to assist police work, substituting once the state.

We host free municipal hostel already 20 seconded police, while clearly stated from the outset that the Minister of Citizen Protection and the Chief of ELAS, that we have made available to the police at any time hundred roof (100) more police officers to be seconded to the island, indicating that the lack of policing, not due to a lack of police accommodation facilities, but the refusal of the government of SYRIZA be staffed AT Mykonos understaffed.

We provide special allowance to civil servants serving in Mykonos and of course the seconded police.

We covered, whenever needed, with the Municipality fuels patrol.

After all the previous things we failed arrogated, personally tabled a lawsuit against the responsible person in the Prosecutor of the Supreme Court and again informed the t. Interior Minister Panos Skourletis (left after the reshuffle), routed directly to developments and to finally give a solution.

So I call on the head of KEPOM let known of the krona and vague complaints and jointly undertake additional initiatives, in order to protect both our own citizens and the image of our island and our country internationally.

Mykonos is the showcase of Greek tourism abroad and we all debt - Government, Region and Municipality - to provide a sense of security to residents and visitors and to preserve the international brand of Mykonos built and built with toil, sacrifice and struggle, by honest and decent businessmen Mykonos, and who constitute the overwhelming majority in our island.