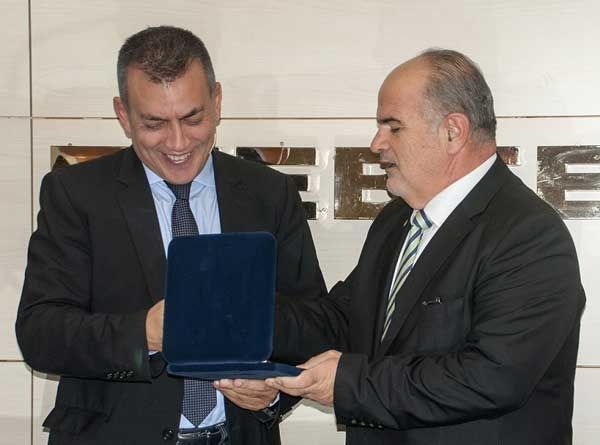 During the meeting, GSEBEE discussed the positions and proposals of the New Republic when it has to do with labor issues, undeclared work, collective bargaining, the process of determining the minimum wage, the role of institutional partners and insurance issues, insurance business and employers', the amount and the pension award process etc..

The positions of GSEBEE, as expressed in the debate, They are as follows:

• In any case, the increase in the minimum wage should be linked to a reduction of non-wage costs to cause a substantial increase in revenue and thus increase demand to heat up the Greek economy. Άμεσα θα μπορούσε να καταργηθεί η αύξηση 1% (0,50% and employee contributions 0,50% employer's contribution) which was established by the N.4387 / 2016.

• Review of arbitrary tenfold over the basic salary for an unmarried worker fixing a maximum ceiling former members of OAEE.

• As part of aid inflows in the insurance system and the reduction of private debt is absolutely necessary a constant, fixed debt adjustment system to social security funds, logic "freezing" of debt and transfer at a later stage of life insurance or a takeover or removal from service time.

• You should as soon as possible to begin a substantive dialogue on the review of the rules on subcontracting, fines and declarations of overtime and overtime, as the existing regulatory framework has created an unbearable administrative compliance costs for businesses.

consequently, the views expressed by Messrs. Vroutsi and Mitarakis summarized below:

The amount of insurance contributions freelancers and employers, It remains too high and should be reduced, combined with the reduction of the pension ceiling which today hampers the development and punishes creativity and consistency

Replacement rates for the calculation of the contributory part of the pension should be adjusted upwards and become more reciprocal and equitable.

Remove the existing insurance law 4387/2016 and replacement by an insurance system that includes the three main pillars and makes it fairer, more rewarding and effective. The implementation of a funded system, will the adjuvant alone insurance, ensuring much higher yields supplementary pension through individual account (maid of honor) each employee.

"Thank you Managers of Labor and Social Security of the New Republic Messrs. John Vroutsi and Noti Mitarakis for their initiative to place this meeting. Labor and insurance are particularly complex and important issues that concern our temporal. We had a productive meeting in which it was found that the points converge is more than those who disagree. In any case the important thing is to maintain a systematic contact and communication for the restoration and strengthening of social dialogue, which was one of the ten victims of economic crisis ".

"Thanks to GSEBEE, President and friend George Kavvatha, including the entire board for hospitality, but mainly for constructive, fruitful and long discussion we had. The New Republic with TMD in the future, methodically they are preparing for the next day. We remain focused and continue the social dialogue, which is the substance and the oxygen of democracy with institutional social partners. We are discussing the major problems and challenges open labor market, small and large businesses, workers, the unemployed, selfemployed, freelancers, for the insurance system of the country, όπως παρουσιάστηκε και από τον Πρόεδρο κ. Κυριάκο Μητσοτάκη στη ΔΕΘ. The current long talk with the President of GSEBEE Mr.. George Kavvatha was essential, constructive and led to many beneficial joint conclusions. A dialogue is not exhausted today, but will continue in the coming period. The dialogue round will be completed in the first phase with meetings with other social partners ".

1547 New confirmed cases of coronavirus cases, and 10 New deaths have been recorded in the last 24 hours in our country, bringing the total cases to 34.299 and...
Read more

They were published today in the Government Gazette, the new protection measures for the second pandemic wave, which, among other things, provide for the mandatory use of a mask in ...
Read more
Previous article Democracy, Meritocracy, excellence: old or new data requested;
Next article The KEDE invites municipalities to appeal to the Council of State for annulment estate concession at Superfund
Share
Facebook
Twitter
Pinterest
WhatsApp
Linkedin
ReddIt
Viber
VK
Tumblr
Telegram
Mix
Digg
LINE
Email
Print

1547 New confirmed cases of coronavirus cases, and 10 New deaths have been recorded in the last 24 hours in our country, bringing the total cases to 34.299 and...
Read more
Breaking News

Emotion from the message of the pilot of the F-16 ZEUS Air Demonstration team. Who is the pilot who sent the message for October 28th!!..... THE...
Read more
Breaking News

President Sakellaropoulou: "History teaches us that our homeland overcomes every obstacle when it is united"