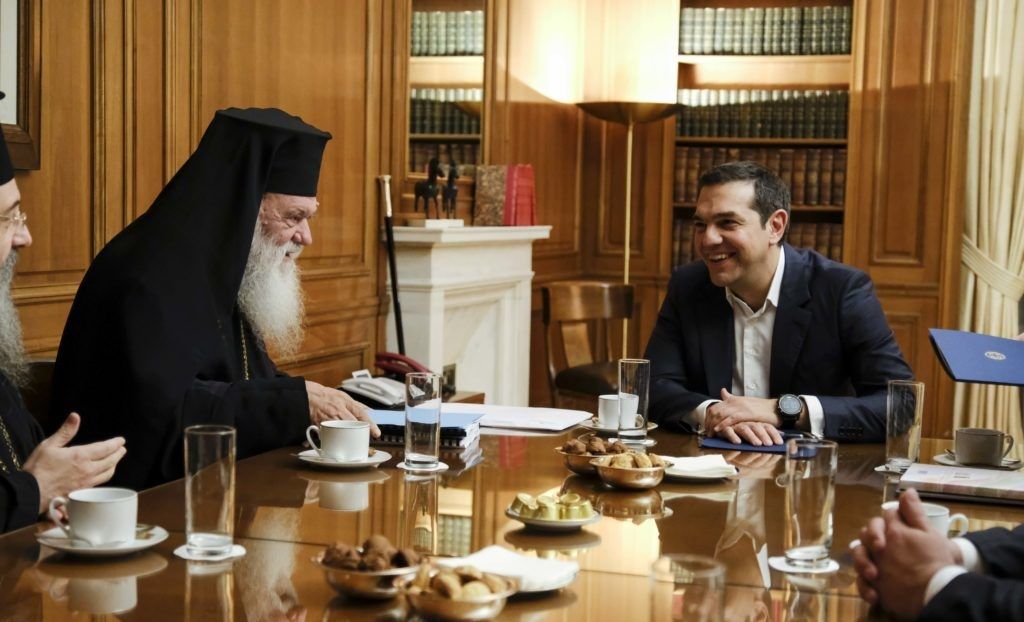 Payroll clergy: With government rules payments – It does not change the permanent status

The Government accepts that the payment of monthly salaries of the clergy will be based on the existing provisions governing the salaries of civil servants, the same day and in the same way.

The state will create Payroll Fund, account with the Bank of Greece, που θα φροντίζει τις πληρωμές αλλά θα καλύπτει την μισθοδοσία μόνον του σημερινού αριθμού κληρικών, while if the number of priests increased their payroll will be "at the expense of the Church".

Part One: Ratification of the final version to be adopted by agreement between the State and the Church of Greece.

Part two: Securing and guaranteeing the salaries of clergy.

In the Ministry of Education, Research and Thriskefmatonpragmatopoieitai today the second meeting of the dialogue committee of the Permanent Synod of the Church of Greece, as part of the ongoing dialogue on training agreement between the State and Church. The meeting is attended by Minister. Costas Gavroglou, Secretary General of the Government, General Secretary of the Ministry and the Religious GenikosGrammateas. In the Standing Holy Synod dialogue committee was ten-page plan for the implementation of the State Agreement – Church.

The draft definitively refuted all the concerns expressed, either due to lack of information or due to misunderstanding, after the joint announcement by the Prime Minister and the Archbishop of the State Plan Agreement – Church 6th November 2018. The plan lists the major reasons why this The historic agreement will be mutually beneficial for both parties, and for efimeriako clergy.

Specifically, the plan provides for the establishment bill, which will consist of three parts. The first part will be ratified unchanged the text of the State Agreement – Church as it will be formed after the completion of dialogou.Ta remaining two parts will contain implementing provisions for the implementation of the Agreement with respect to the two main planks of, the salaries of clergy and lay employees of the Church of Greece and the establishment and operation Development of Ecclesiastical Property Fund.

Specifically regarding timisthodosia clergy, the proposed legislation not only affects the current regime, but instead the substantially improves, as the legal status and rights (official, wage, insurance, pension etc.) the first clergy guaranteed the constitutional guarantees provided by the ratification of the bilateral agreement.

So, the Agreement and the proposed legislation:

in addition to, the salaries of the clergy even more shielded in relation to the status quo, because:

End, Development of the Ecclesiastical Property Fund generated significant economic benefits, both the State and the Church, the property in dispute and exploitation, therefore,hitherto inert and stagnant.

"The whole plan of implementation of the State Agreement – Church

The Deputy Minister of Education Vassilis Digalakis, announces significant changes in the map of universities and a minimum base for admission to universities. Τι θα ισχύσει για τις πανελλαδικές...
Read more

The Council of State rejected as unfounded the application of the Panhellenic Association of Shops and Consumers of Catering and Entertainment, with which he asked to be canceled ...........
Read more
Previous article update PNAI: Scans the epidemic 'wave' seasonal flu
Next article George Hadjimarkos:Region N. Aegean,He believes in the power, the perspective and the future of the islands
Share
Facebook
Twitter
Pinterest
WhatsApp
Linkedin
ReddIt
Viber
VK
Tumblr
Telegram
Mix
Digg
LINE
Email
Print

170 New confirmed cases of coronavirus cases, and seven new deaths were recorded in the last 24 hours in our country, bringing the total cases to 15.142 and...
Read more
Breaking News

The Deputy Minister of Education Vassilis Digalakis, announces significant changes in the map of universities and a minimum base for admission to universities. Τι θα ισχύσει για τις πανελλαδικές...
Read more
Breaking News