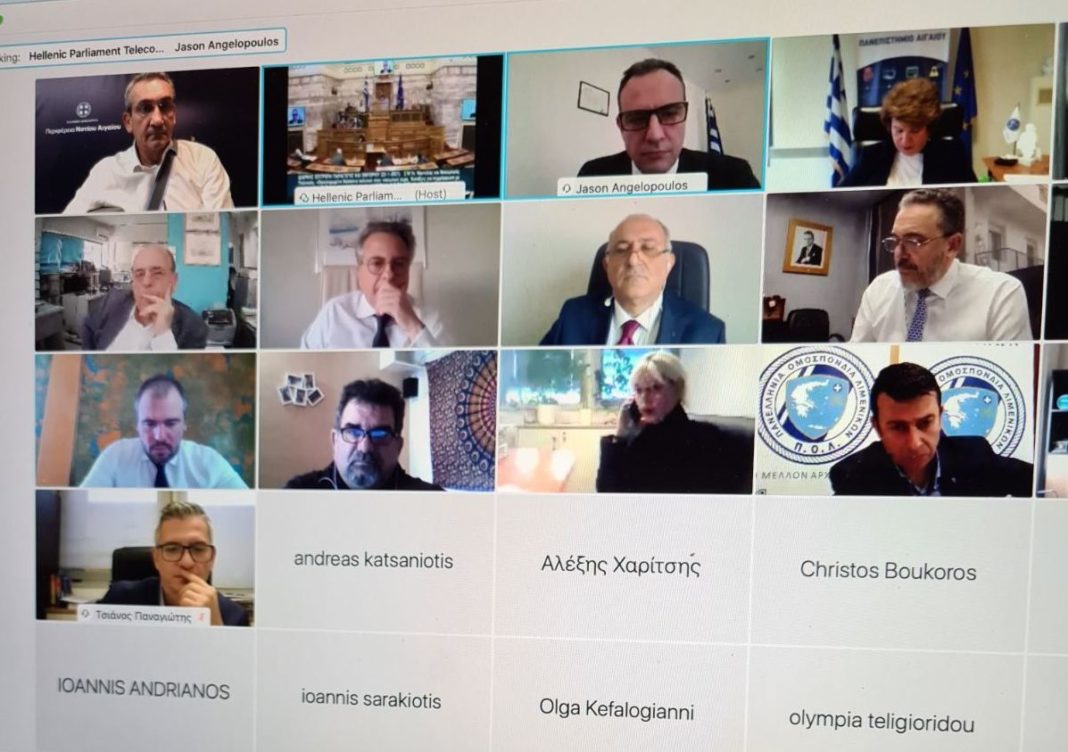 The Regional Governor participated as a representative of ENPE, in the discussion of the Standing Committee on Production and Trade, for the draft law "Integrated maritime policy in the island area "……….

The Region of South Aegean, George Hadjimarkos, participated this morning, as a representative of ENPE, in a teleconference meeting of the Standing Committee on Production and Trade of the Parliament, on the draft law of the Ministry of Shipping and Island Policy: «Integrated maritime policy in the island area, provisions for compliance with international navigation obligations and the upgrade of LS-EL.AKT. and special regulations for the digitization and in general strengthening of the competitiveness of the Greek shipping in the post-COVID era».

The Regional Governor during his intervention in the work of the Standing Committee, welcomed the submission to the bill coming to give new tools, institutionally and financially, to deal with the special conditions of island Greece.

Mr.. Hatzimarkos as a representative of ENPE and the island regions of the South Aegean, Northern Aegean and Ionian Islands, focused on three points of the bill:

– In the "Island Entrepreneurship Financing Program" (Article 7), with resources from the NSRF and the PDE, which will meet the needs of very young, small and medium-sized enterprises located in island regions of the country with an emphasis on supporting operating costs to maintain their viability.

– In the "Special program for institutional empowerment of the maritime economy" (Article 10), which in particular the financing of research and studies for the systematic monitoring of the market and the development of sufficiently substantiated proposals. The resources of the program come from the budget of PDE. of the Ministry of Shipping and Island Policy.

For these three new tools, The Regional Governor said that island Greece needed them and was waiting for them, and that the three island Regions will be the first to make use of these new tools.

At the same time he made the marking "To keep these Programs distinct, strictly for the island area and for no one to succumb again to the political temptation to expand their application, in a way that leads to the well-known policy of "salamiization" ". "Island Greece needs distinct policies and can not and is not allowed to compete with mainland Greece in these programs", he stressed.

The second issue raised by the Governor in the Standing Committee, in which they participated 30 still institutional bodies from all over Greece, was the need to build a great alliance together, to finally accurately capture the weight of the island economy in the country's GDP, since the current statistical picture is completely inaccurate. "That too - as he stressed – so that the next day the new measures will be implemented, to be able to obtain, as soon as possible, the amount of the budget that will answer fairly, in relation to the contribution of the island economy and its needs ".