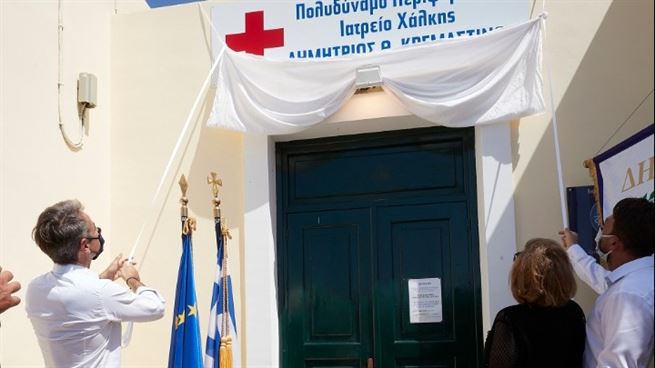 The island of Halki was visited this morning by Prime Minister Kyriakos Mitsotakis, accompanied by Deputy Minister of Tourism Manos Consola, the Dodecanese MPs of the New Democracy Vassilis Ypsilantis, Mika Iatridi and Giannis Pappas, and the Regional Governor of the South Aegean, George Hatzimarkos………

Purpose of the visit, it was, to attend the naming of the regional clinic of Halki, in a regional doctor's office "Dimitrios Th. Kremastinos "in honor of the Dodecanese politician who passed away before 3 months. 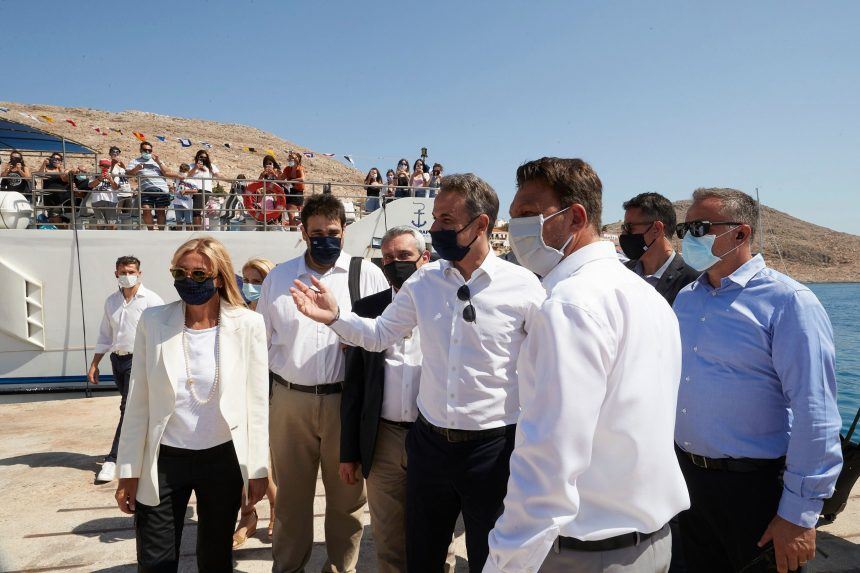 In his statements, The Prime Minister pointed out that "I am very excited to be in Halki today to honor with my presence a great Dodecanese, a great doctor, a great politician, a personal friend of mine, Dimitris Kremastinos. We are given the opportunity, to give his name to the powerful clinic. Dimitris was a man who never forgot his origin, who struggled mainly for small islands to have access to primary care. There was a modernizer, visionary politician who served the national health system, his political space, but a man who could always make great compositions and see the good of the homeland. Dimitris left early, one of the victims of the coronavirus, defeated by disease. If he was with us today, would advise us to do what we do today, to take care of our personal protection, to take responsibility ourselves based on the instructions of experts ".

"I will never forget that Dimitris was a man who took care of me medically and above all and above all he was a doctor. And I remember a very nice reference to him in one of the last interviews he gave, saying that it does not matter if one is prime minister or poor, the doctor's treatment should always be the same. Because above all, health precedes ", added Kyriakos Mitsotakis.

The Prime Minister then had a conversation with his wife Dimitris Kremastinos, Jenny Barber – Kremastinou, during which he remembered the story that when Andreas Papandreou called him to examine him for the first time in 1988, Dimitris Kremastinos refused to go to his house to examine him, asking him to go to the hospital, resulting in A.. Papandreou then to tell his associates that he must either be very serious or must be no shopping.

After the naming of the regional clinic, the Prime Minister and his wife Mareva Grabowski – Mitsotakis went to the church of Agios Ioannis, where the memorial service of Dimitris Kremastinos took place.

At noon, A meeting is scheduled at the town hall of the island, during which general and more specific problems concerning Halki will be discussed.

Earlier, on his arrival in Rhodes, the Prime Minister visited the nursing staff conducting sample tests for COVID-19 at the airport., the executives of the Security Forces but also the employees in the area thanking them for the good services they offer. "The work that is being done is very important. We are the only country that has such an organized system, with targeted controls in Europe. This is also an advertisement for our homeland ", reported, including, Mr.. Mitsotakis.

Afterwards, the Prime Minister made a short stop at the Holy Temple of the Transfiguration of the Savior in Fanes, Rhodes and talked to the residents of the area..

To prevent colds, experts advise you to avoid touching your eyes and nose, as this is how germs are transferred from ...
Read more
Coronavirus - coronavirus

What about the mask everywhere on the floor of an apartment building, yard and car!! From the early hours of Saturday, the new measures for dealing with them will take effect..
Read more
Breaking News