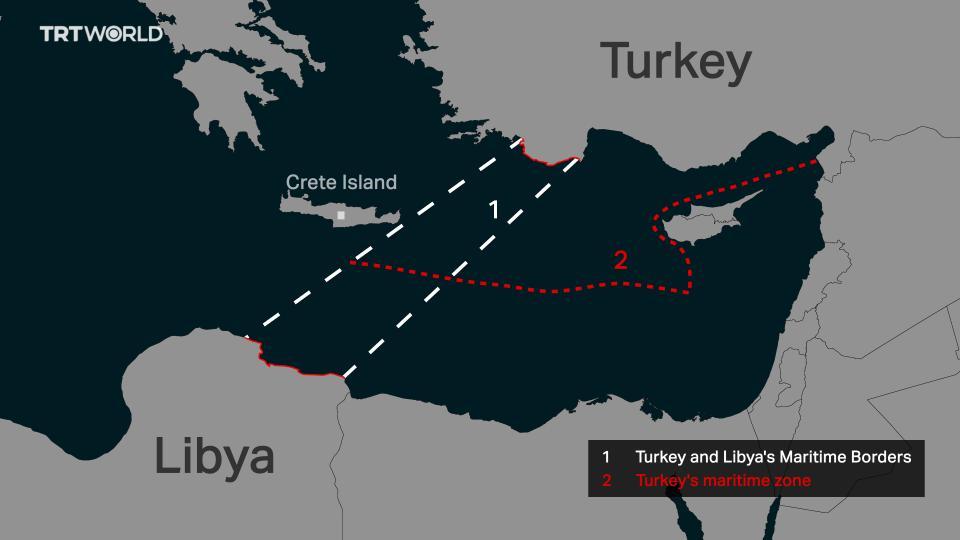 Invalid characterize the European Union circles the agreement recently signed by Turkey with Libya and the fixing maritime borders in the Eastern Mediterranean…….

Moving on the same wavelength with the previous period as,Regarding the memorandum the two countries cooperation, as emphasized competent European sources in the German agency, that agreement can not have any legal effect, which is supported from the first moment and the Greek side.

Recall that just Monday, the Council of European Union Foreign Ministers, the Greek FM, Nikos Dendias, stressed once again just what. THE,that the agreement has no legal basis.

On its part, the European Commission president, Four Ursula de Lainen, He expressed Monday its support both in Greece and Cyprus.

also, According to reports, reference is made in the text of conclusions of the Synod of MFA characterized stressed that Turkey deal - Libya has no legal effect.
Varvitsiotis: Condemning Turkey for the draft decision of the Meeting

"We discussed the upcoming Summit of the European Union draft conclusions, which will be held Thursday and Friday. This plan included a reference to the fact that the memorandum between Turkey and Libya no legal effect, "he said in a statement after the Council meeting of EU General Affairs in Brussels, Miltiadis Varvitsiotis.

"We presented the overall Turkish attitude- All recent months- causing insecurity in the region, "stated and stressed that the clear position of our partners, for solidarity with Greece and Cyprus, is a clear European response to Turkish provocation.
Result diplomatic actions

The EU's reaction comes after the diplomatic initiatives of Athens.

As stated government spokesman, Stelios Petsas, the government has taken "diplomatic initiatives at European and international level, already bearing fruit. From the statements of Heads of State and Government, as French President away, up announcements, as the American and Russian diplomacy "and added:

"Foreign Minister developed the Greek arguments in yesterday's Foreign Affairs Council. Highlighted the delinquency Turkish Aegean, Cyprus and the Eastern Mediterranean, requested the explicit condemnation of these memoranda, establish sanctions framework, if Turkey and the Tripoli government did not comply and of course the support of Greece and Cyprus. highlighted, at the same time, that Greece will do "whatever, what it takes "to defend its sovereignty and its sovereign rights. The issue will be put to the European Council, Thursday and Friday, Prime Minister Kyriakos Mitsotakis'.
Letters of Athens at the UN

Note that today Athens sent two letters to the UN: This is a letter to the same UN Secretary General, Antonio Guterres, where Turkey submits maps, and one in the Security Council of the Organization, the only organ of the United Nations with executive powers than the General Assembly itself.

As said Stelios Petsas during the press briefing, In both letters developed the Greek positions and sets out the legal arguments peace in the region ".

More specifically, as noted Mr.. Petsas "the Permanent Representative of Greece to the United Nations, on the instructions of Foreign Minister, sent - on the issue of Turkish-Libyan "Agreement" - two letters, one to the President of the Security Council and the other to the UN Secretary General "and added:

"In the first letter, It noted that the Turkey-Libya agreement concluded deceptive and violates the Law of the Sea, as the maritime zones of Turkey and Libya is not adjacent, nor is there a common maritime border between the two states.

in addition to, the Agreement does not take account of the Greek islands and their right to have maritime zones (continental shelf and EEZ). noted, also that the Agreement is invalid, as it was not approved by the Libyan parliament, which is evidenced by letters from the President of the Libyan Parliament to the Secretary General. the UN. For those reasons, Our country rejects in its entirety as invalid and not liable to affect the Greek sovereignty this agreement ".

"note, also, that the conclusion of the "Agreement" disturb the peace and security of the region and sought to put into consideration of the Security Council, to condemn it as contrary to international law and to call on Turkey and Libya to refrain from any action, which would violate the sovereign rights of Greece and escalate tension in the region ", He emphasized even completed:

"In a letter to UN Secretary General. Antonio Guterres, They raise the same arguments and requested -due to the invalidity of the agreement- not been registered at the United Nations and not published by the Oceanic Affairs Department and the Law of the Sea UN. also noted, the Secretary General that the issue should be brought to the attention of the Security Council, to the President of which was sent a relevant letter, As I mentioned before".