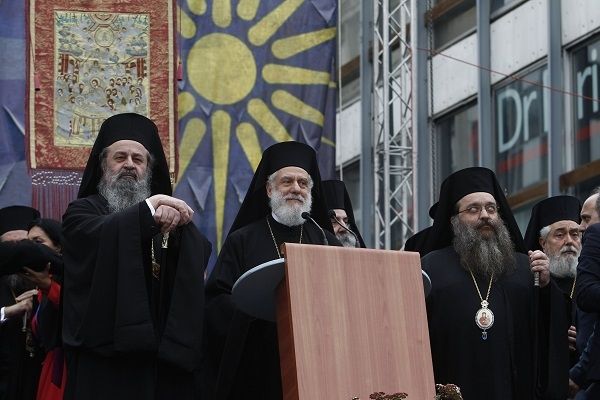 Distances Dorotheos through realfm the rally: We were only responsible for our speech

"He could not have known what one can say Mr.. Theodorakis and Mr.. Kasimatis or Mr.. Patoulis or others who appeared there and spoke. And nor I think this means that the Church did poorly attended, if indeed all these speeches had a political character or addressed to political actors of our country ", said the Bishop of Syros and added:

"Well we were and as you saw at the time of his speech Mr.. Theodorakis the hierarchs were all seated, under the platform. The bishops went to the podium, when they read out the message of the Synod and then again discreetly retired. We have responsibility for the text We supplied there to read to our people and that indeed the assurance of the organizers was that this event was beyond party political colors, As regards the organization of. And I think that has been followed '.

Mr.. Dorotheos noted that "nobody knew, nor Mr.. Theodorakis knew what we say, nor Mr.. Kasimatis, neither we had their speeches and certainly could not have the '.

"In front of my eyes appeared a national rally with patriotic character. I saw before me naive people, all ages. I insist on the presence of young people, was very moving, They are seeking an answer to a question, who in their hearts have a concern ", stated the spokesman of the Permanent Holy Synod.

The Council of State rejected as unfounded the application of the Panhellenic Association of Shops and Consumers of Catering and Entertainment, with which he asked to be canceled ...........
Read more
Previous article The FSA withdraws corn chips
Next article Financing 740 million. euro at OTA
Share
Facebook
Twitter
Pinterest
WhatsApp
Linkedin
ReddIt
Viber
VK
Tumblr
Telegram
Mix
Digg
LINE
Email
Print

312 New confirmed cases of coronavirus cases and three new deaths were recorded in the last 24 hours in our country, bringing the total cases to 14.041 and...
Read more
Breaking News

The government has taken strict measures to limit the spread of the coronavirus, which were announced yesterday by the Deputy Minister of Civil Protection, Νίκος Χαρδαλιάς και τα...
Read more
Airplane - Flights

Coronavirus and Flights: New air directions until 30 September issued by the CAA