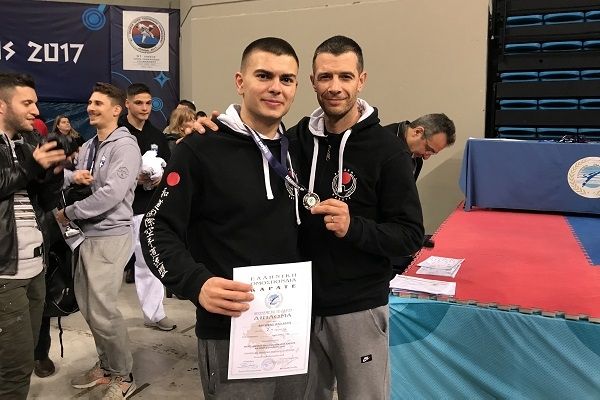 Specifically, the 19 year old Claus, currently a sophomore Department of Finance and Banking at the University of Piraeus and also attends to the Deere Business Administration, He is the son of cyclo Member and e.g.. Minister John Vroutsi.

After a successful championship in Karate adolescents and young, scoring many discriminatory (1 gold - 2 silver 1 bronze), He made his second appearance in Men age where participation is +18 and up.

This second participation, in proportion to their 23 very good athletes participating from all over Greece, considered highly successful as after an excellent race reached the final appearance, giving fight with holder of last year's championship.

Preceded the final 5 tough races, where Bob managed to prevail.

The final ended in a draw 0-0 and by decision of the referees finally took 2nd place and Silver Medal.

View images from the final and awarding:

How to travel by taxi and car in the lockdown. The exceptions and what applies to students and teachers ...... Changes from today for ...
Read more
Previous article The faith of Mykonos is not the shadows no bullying – Under heavy rain the Mykonou accompanied pedestrians cathode of St. image of the Virgin Tourliani
Next article Andros touring the Region of South Aegean George Hadjimarkos
Share
Facebook
Twitter
Pinterest
WhatsApp
Linkedin
ReddIt
Viber
VK
Tumblr
Telegram
Mix
Digg
LINE
Email
Print

Detailed how the courts and prosecutor's offices of the country will function with a Joint Ministerial Decision ...... The conditions of operation of the courts were determined by a joint ministerial decision..
Read more
View more