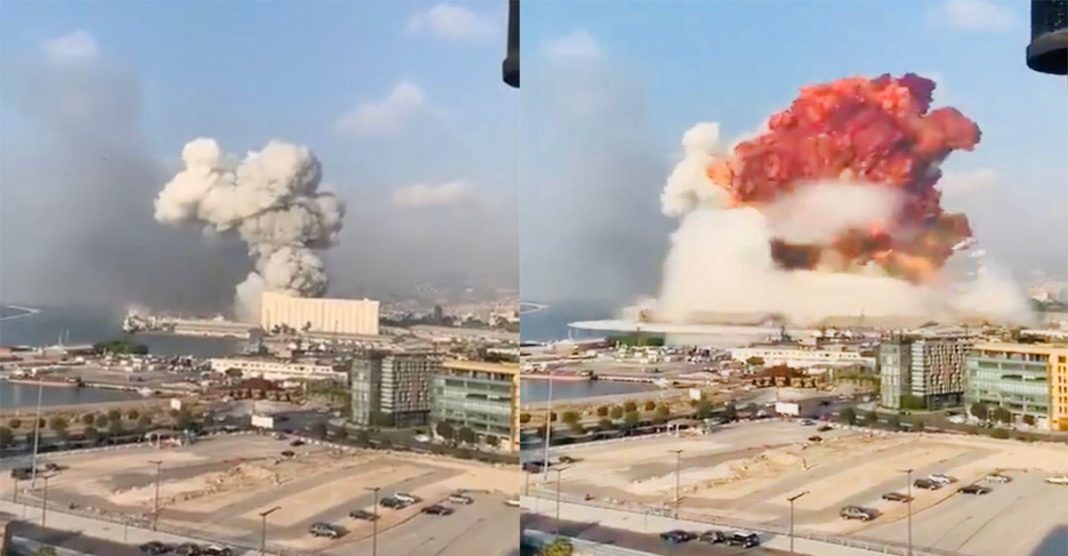 Lebanon: Big explosion in the capital of Beirut
Explosion in Beirut: dead and wounded among "hundreds of victims", says the Lebanese Red Cross…………
At least ten people have been killed in a powerful explosion in the port of Beirut., according to Lebanese medical sources and national security services.

Helicopters have rushed to the area to help put out the blaze..

Beirut Gov. Marwan Aboud called it a "national catastrophe" similar to the Hiroshima and Nagasaki bombings, the explosion that took place today in the port of the capital and resulted in affecting almost half of the city.

Aboud said communication with a group of firefighters who had rushed to the scene of the disaster had been lost.. "A team 10 people got to the point. What happened is similar to what happened in Hiroshima and Nagasaki. They got there and disappeared. It is a national disaster for Lebanon. We do not know how to deal with this. ", added.

more than 30 Rescue teams help the injured, broadcast by the NNA agency, citing sources of the Red Cross.

The powerful explosion occurred on 17.11, local time (and Greek time). It was preceded by a lower power and five minutes later black and white smoke appeared. After the explosion, a column of red smoke rose in the sky.

"It simply came to our notice then, the huge ignition followed and the windows broke. It was a more powerful explosion than the one that killed him (former Prime Minister) Rafik Hariri in 2005 », said a Lebanese resident in the city center.

According to Lebanon's national NNA agency, the first explosion occurred in a fireworks warehouse, near which was another where gas cylinders were kept.

Russia also claims that its embassy building in the Lebanese capital was damaged, but without being injured by staff.

Dozens of people were injured in the blast, according to security sources and correspondents of the French Agency in the city.

The deafening noise was heard in many areas of the capital. The windows of shops and houses were broken within a radius of many kilometers. Reuters reported that balconies collapsed.

"I saw a fireball and smoke rising above Beirut. People were screaming and running, bloody. Balconies fell from the buildings. The windows in the high-rise buildings broke and fell on the street ", said an eyewitness.

Al Mayadeen television channel reported "hundreds" of injuries, with the health ministry saying there was a "very high number" of injuries and extensive property damage..

Another witness said he saw thick gray smoke near the port area and then heard an explosion and saw flames and black smoke.. "All the windows in the city center were broken (…) Absolute chaos prevails ", he said.

The port has been cordoned off by security forces, allowing only members of the civil protection service to cross, ambulances and fire trucks. Journalists have been denied access. Around the port, the disaster seems to be total. In the images broadcast by the local TV channels, there are people trapped in the wreckage, covered in blood.

AFP correspondents said they saw many injured people walking on the roads leading to hospitals.. In the district of Asrafieh, The injured were trying to reach Otel Die Hospital. Outside Clemenceau Medical Center, many injured, including young children, they were waiting for the ambulance to pick them up.

Almost all the shop windows in the Hamra districts, Bandaro and Hazmieh are broken. Car windshields and windows were also broken. Vehicles have been abandoned in the middle of the road, with the airbags open.

Details for all entries located in Greece on 25 September 2020 for the year 2019 and until the end of September for ...
Read more
Breaking News

Medicane: New emergency bulletin from EMY!! "Janos" changes trajectory!! Live his course in the next few hours – Live image from the affected areas

New emergency bulletin from EMY!! The Mediterranean cyclone will follow a course to the South where it will "extinguish". What course will follow ..... New data...
Read more
Breaking News

Alarm signal, especially for Attica and specific municipal districts in the center of Athens, sent during today's regular meeting on the course ...
Read more
View more