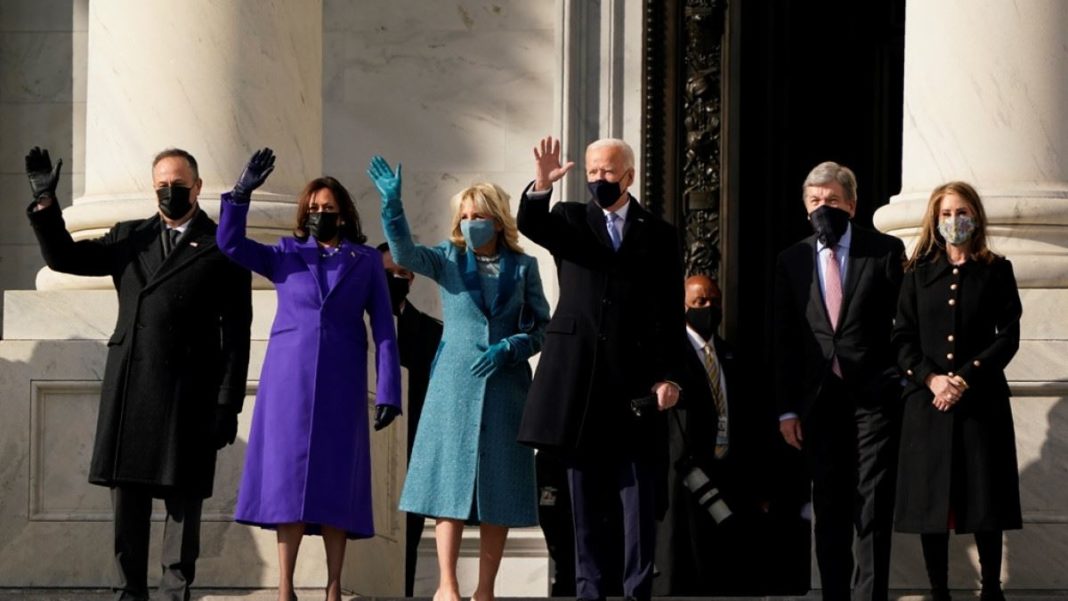 Watch minute by minute the glorious ceremony at the Capitol. Joe Biden sworn in as new US President and Kamala Harris as Vice President. The ceremony has begun…..

The ceremony started shortly after 6:00 in the afternoon Greek time, amid bitter cold and snowflakes in Washington.

Shortly before he was sworn in as the 46th President of the United States, Joe Biden sent a message to the American people via Twitter.

“It's a new day in America” Biden wrote, moments after Donald Trump's farewell speech and his departure for Florida. In the morning, the new US President attended a service at St. Matthew's Cathedral in Washington this morning, accompanied by the leaders of the Democrats and Republicans in Congress.. This function “is an important part of respect for tradition”, explained Senator Chris Koons, a close ally of Biden, who is a faithful Catholic.

Joe Biden will be sworn in as the 46th President of the United States at a ceremony at the Capitol. The swearing in must be completed by 7:00 afternoon. 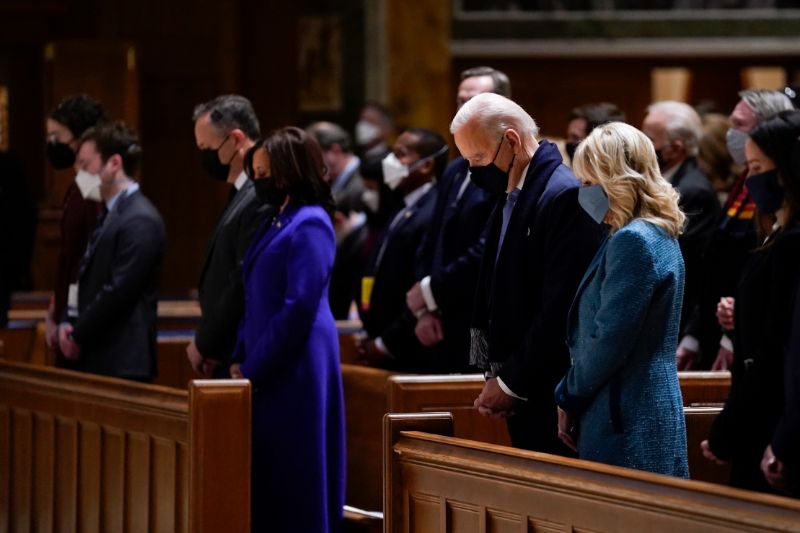 Earlier they had attended the Liturgy in the church of St. Matthew.

Former US Presidents George W. Bush and his wife Laura are present, Bill Clinton with Hillary and Barack Obama with Michelle. 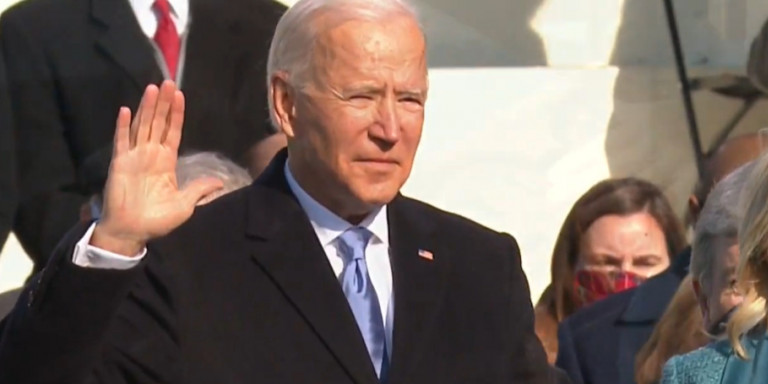 Time is running out for the inauguration of the new American president. At 12:00 at noon exactly, local time, 7:00 in the afternoon Greek time, Joe Biden with his hand on the Bible that his wife will be holding, Jill, 46th President of the United States will be sworn in. The ceremony will begin on 6:00 afternoon. 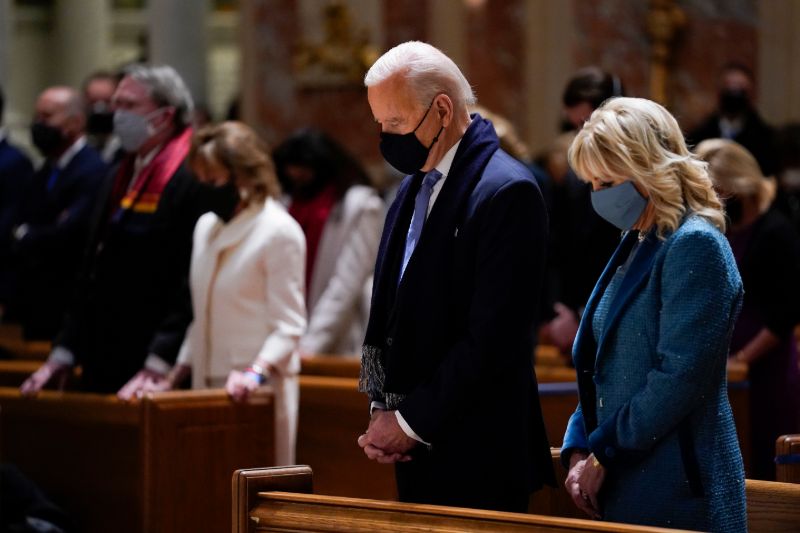 How the swearing in will take place

Today's swearing-in will not be much like the swearing-in of other US presidents. First’ first, there will be no delivery-receipt. Trump will not welcome, before the swearing in, Biden at the White House for tea.

Trump chose not to attend the inauguration of his successor and to leave Washington as president. That’ this and on 8:00 in the morning local time flew with Air Force One to Florida, the Mara a Lago, to which he is currently moving. It is the Air Force One that refused to give yesterday to Joe Biden for the elected president of the USA to come to the capital. Ant’ his, the new president arrived by private jet. 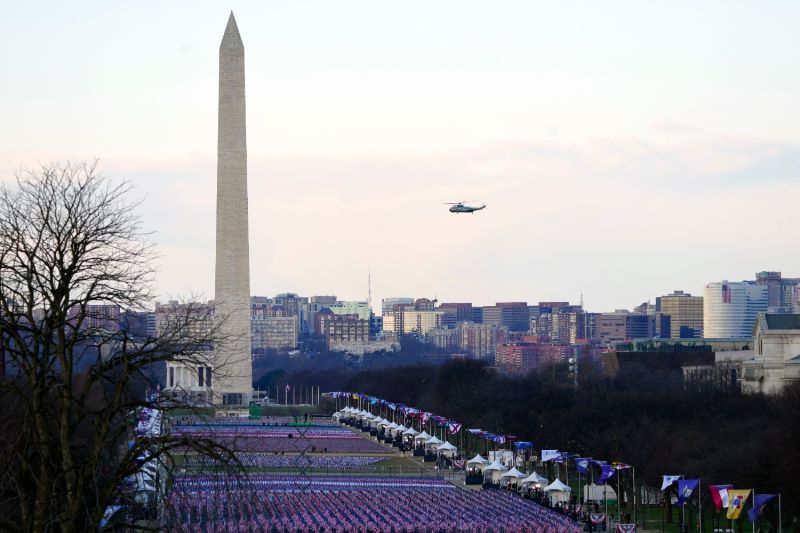 The different swearing in

From the swearing in, As we mentioned before, Biden's predecessor will be absent.

At 12 At noon, Joe Biden will be sworn in as President of the United States and will immediately address the American people to present his vision for the country..

All this in front of a crowd 200.000 flags and under draconian security measures for fear of incidents, after the invasion of the Trump Capitol a few days ago.

In all previous swearing in the National Mall, this huge park in front of the Capitol was filled with people who wanted to see and hear its new president. This year this will not happen due to the pandemic, to avoid overcrowding and prevent the swearing-in of the new president to become a new over-transmission incident.

Flags have been placed in the places that citizens would normally take for days.

The official guests, also, will be minimal.

Pop star Lady Gaga will sing the national anthem and Jennifer Lopez will sing in honor of the new president.

The new president will deliver his first speech in which he is expected to present his vision "to tackle the pandemic, reconstruction, the union and healing of the nation ". In the meantime, As Trump left Washington, Biden tweeted "this is a new day for America," which may be the message he will send from his speech..

also, will not be the traditional inagural parade on Pennsylvania Avenue, due to the pandemic. Ant’ his, the new president with his wife, Kamala Harris and the Second Lord of the USA, but also the former presidents with their wives Barack Obama, George W. Bush and Bill Clinton, will go to Arlington National Cemetery to lay a wreath at the Tomb of the Unknown Soldier.

He will then return by car to Washington. But he will enter the White House on foot, with military escort. There he is expected to sign the first presidential decrees later.

also, in the evening the traditional dances of the swearing in will not take place, also due to the pandemic. There will only be parties via… Zoom, a great TV show prepared by Biden and Harris.

The show with Tom Hanks and big names artists

Joe Biden and Kamala Harris will address the nation on a special TV show starring actor Tom Hanks, which will start at 20:30 and will be broadcast on all major US networks. In the show, entitled "Celebrating America", many well-known artists will appear, such as John Bon Jovi, Foo Fighters, John Legend, Demi Lovato, Bruce Springsteen, Justin Timberlake and others.