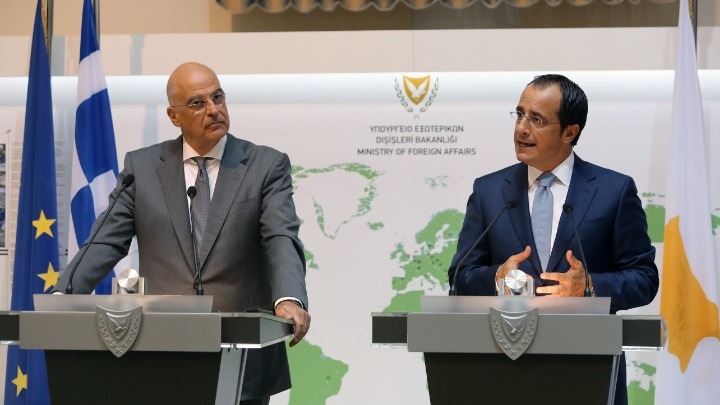 Foreign Minister Nikos Dendias spoke about the joint pace of Athens and Nicosia and the ongoing coordination at the political and official level., who was found today in Cyprus, in his statements after the meeting he had with his Cypriot counterpart Nikos Christodoulidis. Mr.. Dendias stressed that the challenges on the part of Turkey are a choice of unrest that betrays the impasse of its choices, while she added that her pretentious calls for dialogue do not convince anyone………

“Turkish challenges despise the EU's clear positions, of the USA and the states of our region. They denigrate European values, International Law, despise the Law of the Sea”, noted Mr.. Dendias. “They constitute escalation and constitute unacceptable militarization. They are a turbulent choice that betrays the impasse of his own choices”.

As he pointed out, In the meeting with his Cypriot counterpart, the bilateral relations and the cooperation between Greece and Cyprus were discussed. “within the common perception that we maintain and cultivate with the countries of the region that share the same values ​​and perceptions with us” and “contribute to the maintenance of peace and stability in our region”. In the following days, after all, as stated by the ‘Greek minister, the two countries will participate together in the informal council in Berlin, where the list of sanctions against Turkey is expected to be discussed, which has the institutional obligation to be presented to us by the High Representative.

“The escalation of Turkish aggression is directed against the EU. and should also involve the escalation of the European response to”, He stressed that Turkey's illegal behavior will be discussed at the highest level: The MED7 Summit in Corsica and then the Extraordinary European Council, which will be attended by President Anastasiadis and Prime Minister Kyriakos Mitsotakis.

Mr. Dendias also referred to the absolutely convicted, as he characterized them, illegal Turkish activities in the Cypriot EEZ and the Greek continental shelf. Obsession with delinquency does not create accomplishments, noted and added: “It does not produce justice. Reaffirms Turkey's destabilizing role in the region and its lack of arguments. It is obvious that neither Greece nor the Republic of Cyprus are the countries that create the aggravation. But this does not mean that we are watching passively. We take and will take initiatives that will prevent the creation of accomplished ones”.

“Turkey's ostensible calls for dialogue are not convincing. As far as we are concerned, we have always been in favor of dialogue”, Mr. reached. Dendias.

N. Christodoulidis: There should be a substantial response where basic EU principles and values ​​are violated

Cypriot Foreign Minister Nikos Christodoulidis stated that the next steps were agreed at the meeting, as well as what is being sought in view of the informal meeting of the Foreign Ministers in Berlin. as reported, there is contact and coordination between Greece and Cyprus on a daily basis, due to developments in the wider Eastern Mediterranean region, as evidenced by Turkey's review behavior.

The initiatives undertaken by Nicosia and Athens were also discussed at the meeting, in order to enter “the foundations for the institution of cooperation in the region, without a priori exclusions, and with the aim of making our region a model of cooperation between states in full respect of the basic principles and values ​​of the international system and international law”.

“The only way is to choose the foundation of good neighborly relations and synergies, is the only way to establish excellent relations with our neighbors and the wider region”, The Cypriot Foreign Minister noted and characterized “anachronistic” the behavior of Turkey that negatively affects the efforts and the will of Greece and Cyprus “to ensure conditions of security and stability in the wider Eastern Mediterranean region”.

“Despite the negative developments in the region due to the behavior and approach of the minority of one, despite the anarchic international system in which we are called to move, There are no dead ends in Diplomacy. Even if it seems, it is temporary and what is needed is determination, patience, persistence and clear goals”, highlighted.

“The dialogue, If there is real will and will from everyone, Cyprus can bring results, as it did with Egypt, Israel and Lebanon, is ready to discuss with the other neighboring States the definition of its maritime borders on the basis of the International Law and the relevant UN Convention on the Law of the Sea of ​​1982”.

As he noted, “Developments in the region will largely determine the future of Euro-Turkish relations as 27 We agree that Turkey's behavior in the Eastern Mediterranean affects the full range of Ankara-Brussels relations”.

“Our approach to Euro-Turkish Relations, as well as for the EU's relations with any Third State, it is twofold”, reported. “A carrot and whip policy where there can be cooperation where there really is infrastructure and will, but also a substantial response where basic EU principles and values ​​are violated”.

“As the EU, we must be consistent, determined, reliable by observing equal measures and weights. These were the approaches, after all, among others, laid the foundations for the establishment of the EU and it is faith in them that will lead it where we envision those who truly believe in its future”, said Mr.. Christodoulidis.

End, as he pointed out, the Cyprus issue was discussed, with both sides expressing their readiness “to resume talks from where they left off in Crans Montana immediately after the election process in the occupied territories”.

“Without a doubt, the current unacceptable situation can not be the solution to the Cyprus problem., and we consider it possible to resume substantive talks that will lead to a positive outcome on the basis of the agreed solution, if the conversations take place in the appropriate environment, as requested by the UN Secretary General, away from attempts to create accomplished either on the ground as we see with the enclosed area of ​​Famagusta, or at sea with the illegal actions of Turkey”, concluded.

Meeting with the Minister of Foreign Affairs of Cyprus @Christodulides @CyprusMFA. Strong bonds are reaffirmed, multifaceted cooperation and close coordination between 🇬🇷🇨🇾. pic.twitter.com/W9JtVwWJdg

Britain added Santorini, Lesbos, Tinos, Serifos and Zakynthos in the list of destinations that are considered safe, announced on Thursday ...
Read more

Britain added Santorini, Lesbos, Tinos, Serifos and Zakynthos in the list of destinations that are considered safe, announced on Thursday ...
Read more
Greece

THE MINISTER OF INTERIOR CITIZENSHIP Takis Theodorikakos proceeded with a legislative improvement in the bill of the Ministry of Interior for the modification of the citizenship code .......... In the bill discussed in ...
Read more
Breaking News

436 New confirmed cases of coronavirus cases, and six new deaths were recorded in the last 24 hours in our country, bringing the total cases to 20. and...
Read more
View more