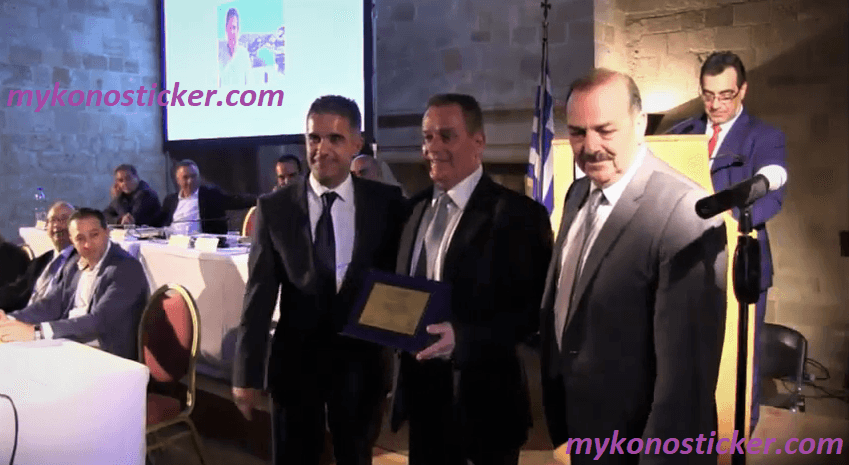 The greatest curse that can dothei a man of politics and communication, It is the artistic composition of the image of a politician but which does not respect neither the personality, nor as a political persona.

In the case of Christos Veroni, fortunately for me, The above rule does not apply.

But who is really Christos Veronis; How really we know; How many of our compatriots arrived to treat him as a political messiah; Let's go a little further back…….

Christos Veronis is a special case of political. in 18 years he commanded the municipality many times marked by his political rivals including as absolute, confrontational centralized, impulsive, introvert, conservative.

While the majority was dynamic, stubborn and industrious in the red limits, visionary and pragmatist. It was for decades a kind of political totem. Usually, elections ended well before- good start.

The fact that Mykonos seemed as a municipality-standard large infrastructure projects, solid development plans and high per capita income as sufficient arguments to make him invulnerable.

Even at a time when the electoral battle was inconclusive, the reasons had nothing to do with his political, but with exogenous agents and extreme populist practices.

Eventually all the nice finish. Former mayor retires, the municipality continues to operate smoothly and suddenly a "bang" seems to flick in the air labors and posterity decades.

tons of mud, slander and misinformation from "friends" and enemies on the so far invincible political wall.

frustrations years, personal hatreds, human weaknesses convert some prosecutors already send conviction. They want to end the, to flatten the.

That, wife and child, experiencing their own Calvary. moments of loneliness, frustration and reflection succeed one another until the day of justification that comes with festive manner.

With a simple statement, without fanfare and interviews, accepts the restoration of his reputation, Once the political clock Mykonos turns to pace Arabic music.

Mykonos has, at least, so it seems finally turns page. Everything seems perfect. champagnes, models, lacquer and effects are sprinkle with glitter happiness heads of many.

Some live in a parallel universe, while the Athenian press but also life itself indicate that something is wrong. With steep and asyntachto how the island grows "business", at the same time the identity, the individuality and cultural nuances altered.

Now mimics other Mykonos standards, and Mykonos every year from owners converted to guests in their place. There are few cries of anguish for the "island you lose".

Traditional friends and visitors to leave with bitterness, while at the same time the infrastructure of the island operate the fuel Veroni period.

There are few who argue that the island has entered a stage of prolonged decline. Some signs betray this development. The local economy is based on small and medium family business suffers.

Group departures consultants, resignation letters meet with society as done from time to shout the "up here was".

"Something has to change. We will lose our country if we continue like this. ".

The lone man in Davos, the founder of Mykonian spring tourism, display even by historical rivals as the only solution to save the island.

And while he never sought the, the circumstances brought him back on track to do better what only he knows: theory act within the limits of obsession.

And in this passion of investing most islanders who want to see Mykonos first again, but with a distinct identity.

Contemporary Looking to the future, but also with respect to the past and its roots.

If you ask me personally what is the greatest asset of Christos Veroni, the instinctive ingenuity would answer your.

I consider him as a great political balancer between realism and romanticism.

And those of us who occasionally grumble about some of the options, we realized that the place will probably have achieved much less.

There is and what an easy thing to reconcile interests, views, expectations and visions at the same time thinking that it will not wronged your fellow, how to make social policy, how to balance the great wealth with people of toil and everyday life.

If you look at the big picture in society that we live, Christos Veronis was admittedly a very successful mayor.

What we find today if coldly judge the degree of social acceptance and the people rallying around his candidacy.

Living each day close, I notice that stress on Mykonos the next day is the same as when, almost child, first became mayor.

And if you bewilder every day with communication wanting to put in the new era, he says "Nick, Island want to save, and leave them for others ». He might be right.

The day the Byzantine Empire "fell"!! The History of Fall!! The Fall of Constantinople was the result of the siege of the Byzantine capital, of ...
Read more
Breaking News