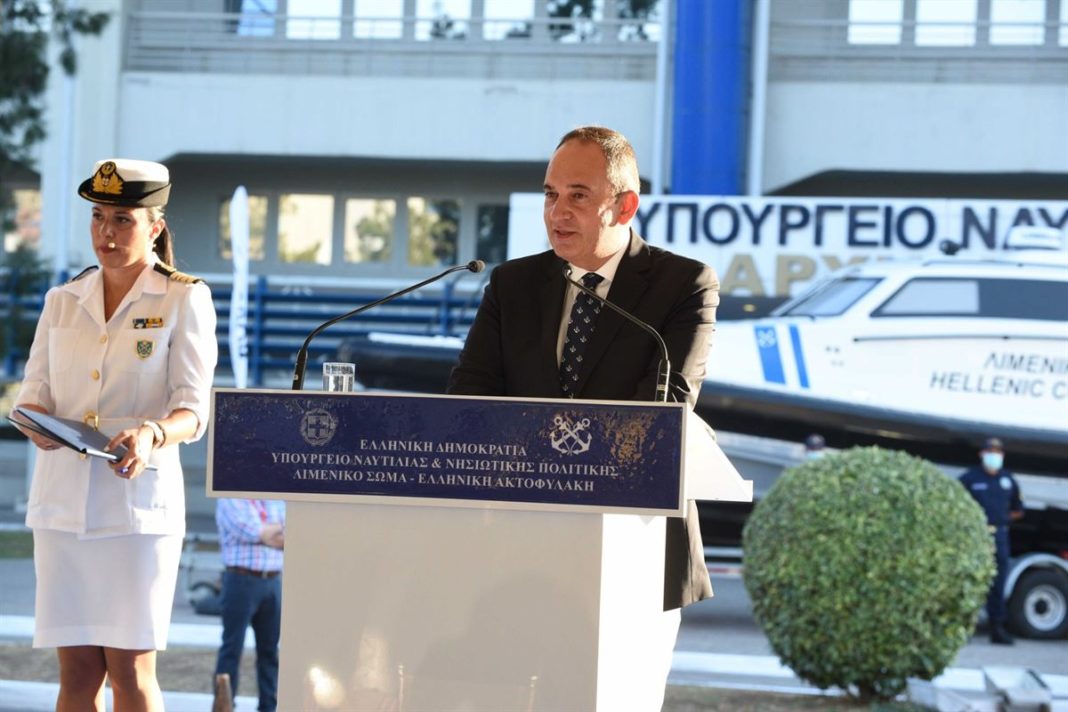 The first of three patrol boats, properly configured with sanitary equipment, joined today the fleet of the Coast Guard – Greek coastguard. The specific supply of total cost 1.398.000 euro, was held through an open international competition, and was funded through the INTERREG European Territorial Cooperation Program "Greece-Cyprus 2014-2020"………. 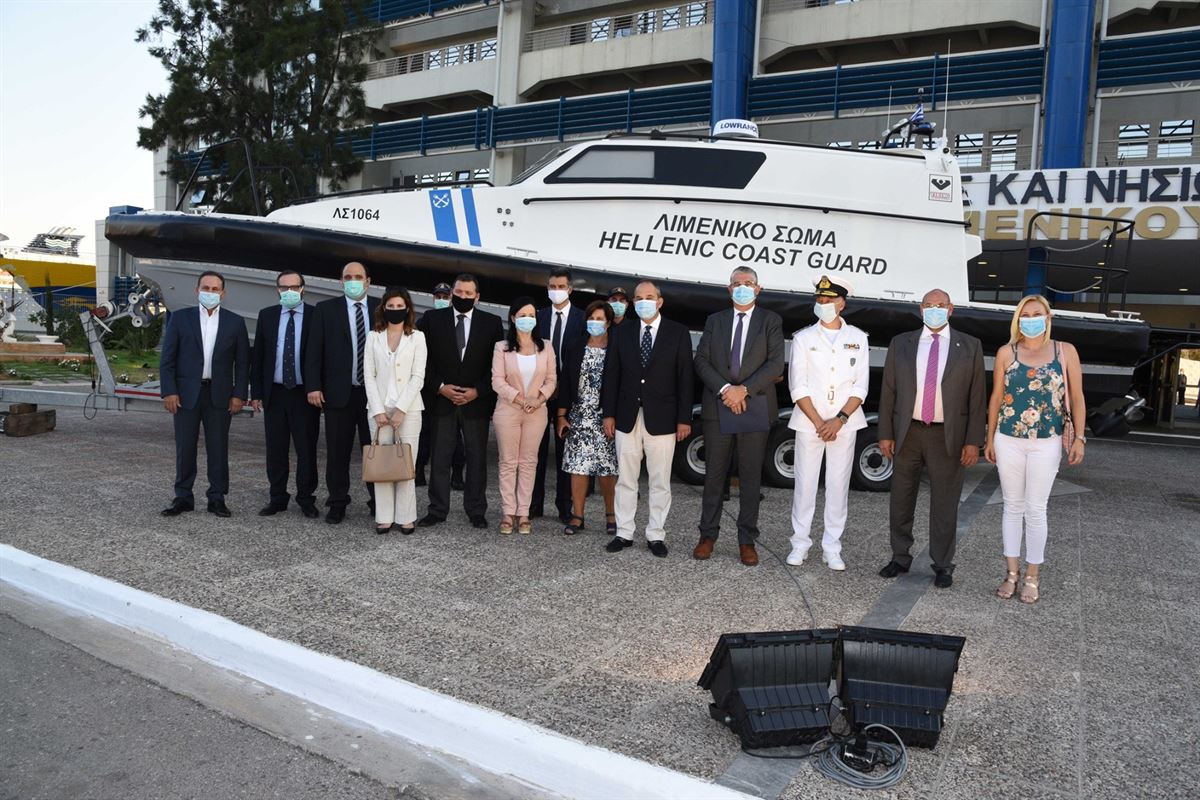 "The Coast Guard for many years – in collaboration with EKAB – undertakes the transport of patients almost daily, where other means fail to pronounce the valuable bridge of transport, which in many cases is a key element in saving lives ", noted the Minister of Shipping and Island Policy Mr.. Giannis Plakiotakis and continued: "The supply of the first three boats, is expected to be completed by the end of August covering special needs in island areas with increased rates of transportation and assistance ".

As noted by G.. Plakiotakis "with rapid procedures we proceeded to the implementation of the relevant contract so that this special summer of 2020, to have at our disposal these boats in the "battle" for the shielding of our islands ".

Still, the Minister of Shipping and Island Policy, revealed that “the planning of the Ministry of Shipping and Island Policy, in collaboration with EKAB and EODY, is to proceed with the supply of at least four additional vessels, in order to meet the identified needs in the Ionian Islands, Sporades, Saronic Gulf and Samothrace. Through the NSRF Staff Structure and in close cooperation with the Ministry of Development and Investment, we have already launched actions to ensure the necessary resources from the NSRF 2014-2020 ».

The Chief of the Coast Guard, Rear Admiral L.S.. Theodore Clears, noted among other things that the specific patrol boats, properly configured with sanitary equipment, "Have been built in Greece with specifications prepared by officials of the Coast Guard and the National Emergency Center" and added: "The Coast Guard has been performing since time immemorial, although it is not widely known, an admirable social project, which includes patient transfers from island areas that do not have direct access to larger hospital units. I am grateful to all the men and women of the Coast Guard-Greek Coast Guard who take without a second thought the great responsibility of personal contribution to the preservation of the supreme good: of Health ».

The Minister of Health, Vassilis Kikilias in his greeting praised the contribution of YNANP and the Coast Guard to insularity and the outlying islands and noted: "In this very difficult period, you are actively contributing in the most decisive way to tackling the pandemic.. It is obvious that in the complexes of our islands and in the remote islands, where there is a need and the lives of the inhabitants are endangered, these vessels of the Coast Guard- which are essentially floating ambulances but can also be used in other LS operations- with staff of EKAB will make a decisive contribution to the salvation of human life which for us is the,what is higher.

The business planning we did for this summer in everything,what has to do with our islands and who "unfolds" these months and to this day is crowned with success, obviously includes the Coast Guard and these vessels. The contribution will be very large and decisive. I am glad that this boat will be based in Naxos which is in the heart of the Cyclades and will offer valuable services ".

From his side, the Deputy Minister of Development and Investment Mr.. Yannis Tsakiris, expressed his joy at the "receipt of the first boat, of the three provided in this project "and added: So when we refer to the treatment of an issue or challenge or problem together with another country we use the NSRF as a tool and in particular the territorial cooperation programs, the INTEREG.

INTEREG programs concern collaborations and projects that contribute significantly to the development of eligible areas between two or more neighboring countries. I wish the boat a good trip , to carry out its purpose smoothly and effectively in our Greek seas and soon to be here again together to launch the other two vessels that are on their way to assist him in his sea patrols ".

End, the Ambassador of the Republic of Cyprus Mr.. Kyriakos Kenevezos, not only wished "good seas", but also a little work: "Because if there is little work, it means that there are fewer problems.

They are”, he said, “very important for us Greeks of Cyprus when through synergies of Greek and Cypriot Hellenism, we prove once again the way we deal with and the situation in the area where we live, but the way we see and face human life. This is our distinct difference , unfortunately with our neighbors, which at the time we highlight synergies aimed at social contribution and security, at the same time they are constantly breeding and constantly creating turbulent conditions in the area. They are parallel roads but apparently do not join at any point. Let's hope things change one day. The second element is that at a time when we are facing conditions of violation of sovereign and other rights in the region. Cyprus and Greece, Greece and Cyprus together highlight again and again the way we should deal with things in our region. A way of synergy, creativity with the aim of the simple and self-evident, peace , prosperity, safety for human life. I wish you all the best and thank you very much for the invitation to be with you today”, Mr. reached. Ambassador.

The Council of State rejected as unfounded the application of the Panhellenic Association of Shops and Consumers of Catering and Entertainment, with which he asked to be canceled ...........
Read more
Previous article Ferry Routes – Plakiotakis: Adherence to coronavirus measures should be second nature to all!!
Next article Tourism season in Aegean Islands: With 243.530 passengers via international flights at the airports of the South Aegean, July closed
Share
Facebook
Twitter
Pinterest
WhatsApp
Linkedin
ReddIt
Viber
VK
Tumblr
Telegram
Mix
Digg
LINE
Email
Print