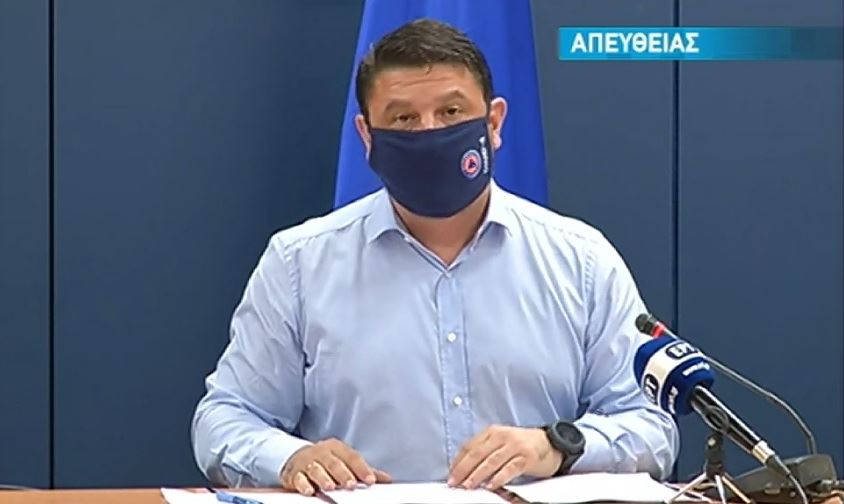 From August 1st until today in the country we had 961 new confirmed cases, which led to yesterday's decision of the government to impose new measures, to stop the growing trend of the epidemic, pointed out the Deputy Minister of Civil Protection and Crisis Management Nikos Hardalias, during the standard weekly update on the course of the pandemic……..

The Undersecretary referred in detail to the new measures announced yesterday by the government, and clarified that the submission of a negative molecular control test (PCR test) for those entering the country does not apply to children up to their age 10 years. Furthermore, from the 16 In August, those entering the country from Albania will enter a 7-day quarantine.

Concerts and performances and participants with standing are suspended

Regarding the closing on 12 at night for health stores tonight, clarified that the lowering of the shutters concerns the following companies:

The offenders will be entered in the first phase fine 10.000 euro and in case of a second violation padlock for 20 days.

With,as regards the processions, The Undersecretary noted that the JMC is clear about religious services. "Our cooperation with the Church so far is excellent, takes the issue very seriously, the image we have is that in all the churches all the measures are observed ", he said, while in view of the Fifteenth of August, drew attention: "Everyone will take responsibility for the processions".

He reiterated that every public event with suspension is suspended, including concerts and performances, clarifying that where there are performances with seated people continue to observe the health protocols.

also, among other things stated that from July 1 to August 10 have taken place 266.116 molecular tests in 2.162.251 entering the country and found 508 active cases of coronavirus. From those 164 remain active, 243 returned to their home countries, while 101 are no longer active and remain in our country.

N. Hardalias stressed the need for compliance by all and individual protection measures not to have a proliferation of cases.

The Council of State rejected as unfounded the application of the Panhellenic Association of Shops and Consumers of Catering and Entertainment, with which he asked to be canceled ...........
Read more
Previous article Coronavirus Vaccine: Russia approves first coronavirus vaccine – It was given to one of Putin's daughters
Next article European Commission: The EU is on the side of Greece and Cyprus
Share
Facebook
Twitter
Pinterest
WhatsApp
Linkedin
ReddIt
Viber
VK
Tumblr
Telegram
Mix
Digg
LINE
Email
Print