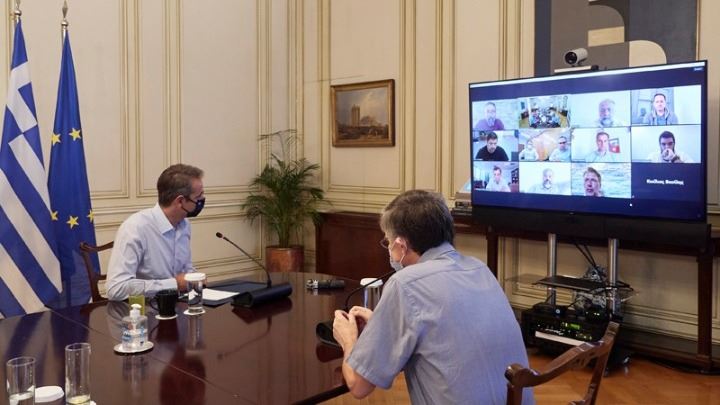 Coronavirus Pandemic-Measures: New measures for the coronavirus – Appeal of Kyriakos Mitsotakis to the youth

Appeal to young people for more attention due to cases of coronavirus, addressed the Prime Minister Kyriakos Mitsotakis, who chaired the regular meeting this morning – via teleconference- for the mockery, at Maximos Mansion, and announced new measures, within the day, which will be announced by the Deputy Minister of Civil Protection in charge of Civil Protection and Crisis Management, Nick Hardalias………

Mr.. Mitsotakis addressed the citizens and sent a message to the young people: saying the following:

"I want to make a special appeal to our young people, to young children. I also have children at this age, 17, 23 and 22, I know the carelessness of age. But please, appeal: Caution, take care of yourself, you are not invulnerable, and especially those who are not invulnerable are your parents and your grandparents ".

The Prime Minister appeared very worried and that has to do – as he said – with the fact that today we have evidence of the spread of the virus in a number of tourist destinations.

"It's too much, very important to take responsibility for protecting themselves, not just themselves, but especially their loved ones, their parents, their grandparents ".

"Beware of those returning from vacation"

The Prime Minister stressed that the recommendation will be very strict, and that whoever returns from a tourist destination for a week should take care to be careful.

"It simply came to our notice then; Wear a mask where you can and certainly keep away from the most vulnerable, the elderly people he may have at home. If he lives with people from whom he can not get physical distance to wear a mask and for at least a week – until we are absolutely sure that it does not return with the virus to urban centers – to protect those we want to take more care of "said Mr.. Mitsotakis.

He also stressed that there will be a similar effort by the government through some spots that will be prepared, to emphasize precisely this issue, but in addition to the additional measures to be announced today, "we must once again emphasize the importance of individual responsibility".

"It is not possible to have a police officer and a port officer next to each of our fellow citizens. Of course there are restrictive measures. Of course there are sanctions. But if we really want to stop the birth of this second wave - which seems to be manifesting itself in all countries of the world- and not to be forced to take more drastic measures which will undoubtedly have economic consequences, we must all take our responsibilities now "said Mr. Mitsotakis.

He added that the state will assume its responsibilities "very organized, as we have done so far, always listening to the advice of experts and not hesitating to take action sooner rather than later "and appealed to young people to show more attention.

"Especially, I want to make a special appeal to our young people, to young children. I also have children at this age, 17, 23 and 22, I know the carelessness of age. But please, appeal: Caution, take care of yourself, you are not invulnerable, and especially those who are not invulnerable are your parents and your grandparents. Therefore, I will not tire of repeating this call, especially in young children, so that we do not find ourselves in the awkward position of having to take more drastic measures than we want, which will undoubtedly have economic implications ", the Prime Minister concluded.