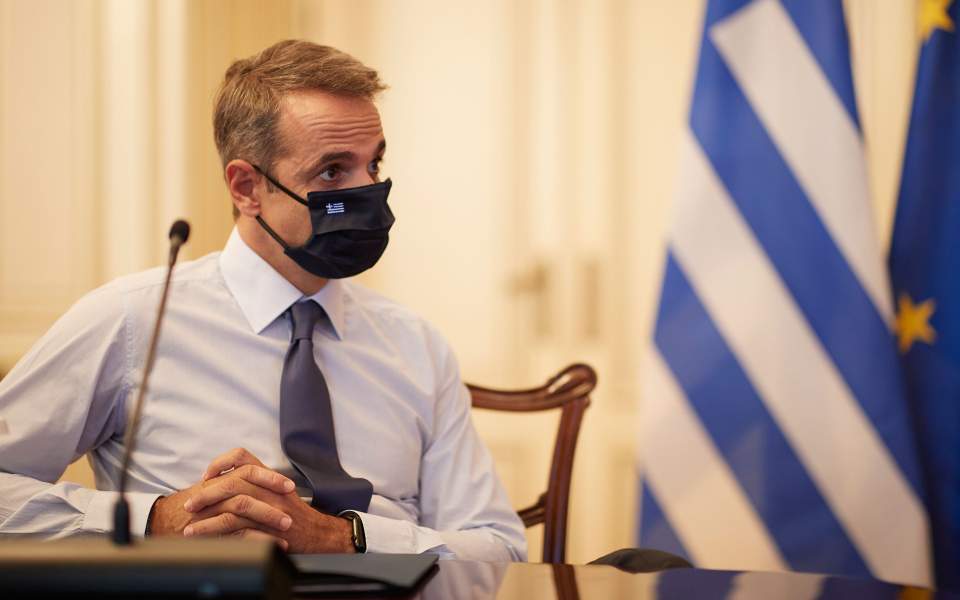 "We must reactivate our national vaccine, which is nothing more than our ambition, and together we must follow the measures indicated by the experts and I am sure that if we do,, and we will do it because we did it in the first phase of the pandemic, we will emerge victorious from this difficult battle ",………stressed the Prime Minister Kyriakos Mitsotakis at the beginning of the teleconference on the coronavirus.

"We are at a critical juncture in the battle that we have all been coordinating since February., state and society, against the coronavirus pandemic. We are seeing in recent days a significant increase in positive cases which, Nevertheless, is fundamentally different from the first wave of the pandemic and this is of course something that worries and worries us ", reported.

"We must say that the increase in cases is mainly due to the relaxation of compliance measures within our country in July.. And in that I believe we all have a responsibility for it. Once the 10% of cases are imported, most cases at the moment are domestic ", said the Prime Minister.

"We had stated very clearly in the announcements made at the end of April by me and the members of the Government and by all those in charge and by Nikos and Sotiris that the plan for the next day is not a plan to leave the sanitary and the financial crisis, nor is it a simple plan to return to some normalcy. Normality as we knew it until February and until the scientific community discovered the coveted vaccine, but also the necessary treatment protocols, there is no. That is why no complacency is justified. ", highlighted.

"At this stage we do not yet know the duration of the pandemic. We know that science is making rapid progress, but we do not yet know for how long, for how many months will we have to live with the virus ", said Kyriakos Mitsotakis.

"We had stated from the beginning that our plan is constantly updated based on the real data. Every measure of restarting the economy we had said then, that will be measured, as it happened. It will be evaluated, as it always does and we will constantly decide if we need to speed up somewhere or slow down somewhere else. And it's something we do. We do it every day. We have only imposed in the last month, always following the advice of experts, at least 15 targeted new restrictive measures. These are measures that respond to the findings of the Observatory and the Inter-Ministerial Intervention Mechanism that we have created. And what some often maliciously call a lack of planning or government backlash, it is precisely this ever-changing condition to which every Government is called upon to adapt, I emphasize this to every Government, in the face of a pandemic that poses unprecedented public policy problems for which there are neither ready answers nor tried and tested solutions ", said the Prime Minister.

"In this great crisis, health and the economy are not two concepts that oppose each other.. We are not either with health or with the economy. To have economic growth we must have health. In order to have an adequate health system and a social protection index, we must have an economy that provides income that works for the benefit of the citizen and a state that fulfills its role.. That is why I will say it again. Faithful observance of the rules becomes even more imperative from now on. ", highlighted.

"We all wear it, all mask indoors but also in open spaces where it is not possible to observe the necessary distances. The mask must now become our permanent companion, as are our keys, our glasses, our mobile. We avoid mass gatherings and entertainment in places of intense color. And of course we reject the conspiracy theories that call for disorder in the measures proposed not by the state but by the expert scientists in order to finally protect the public health of all. ", stressed the Prime Minister.

During the meeting, the epidemiological data were assessed and the need for stricter controls was pointed out.. Where cases have occurred it has been reported that systematic tracking is taking place and an effort is being made to seal. Arrivals statistics were also presented, confirming that the biggest problem lies not in the imported incidents but in the domestic transmission. The biggest problem is located in Thessaloniki and in Northern Greece in general and in these areas special attention will be paid..

At the beginning of his speech, Kyriakos Mitsotakis referred to the unprecedented tragedy in Lebanon. "Let me make a brief introductory statement starting with my heartfelt condolences and thoughts to the suffering people of Lebanon and especially Beirut after this tragic explosion we all saw yesterday.. In consultation with Nikos Hardalias, but also with the Chief of GEETHA, the first C130 is already taking off immediately with men and women of EMAK as the first needs, as requested of us by the Lebanese, concerning human resources in a search and rescue operation. And of course we are ready to assist with additional medical equipment as I imagine that as the hours and days go by we will realize the magnitude of this unprecedented tragedy that struck Lebanon. ", reported.

With an own goal by Ruben Dias and a goal by Andrija Zivkovic, PAOK threw Benfica on the canvas 2-1 και προκρίθηκε στα play-off του Τσάμπιονς...
Read more
Airplane - Flights

The reason was the decrease in international tourists by 65%, due to border closures and various other travel restrictions. Η μείωση του αριθμού...
Read more
Greece