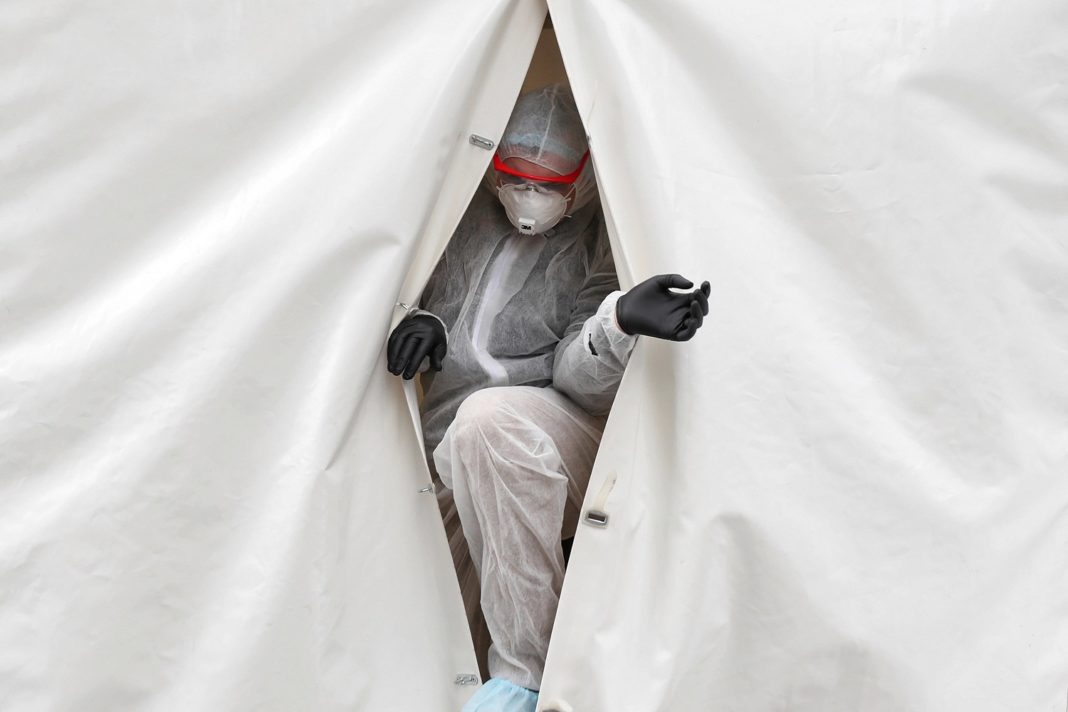 Coronavirus Pandemic: What to expect from the teleconference in Maximou for Koronio!! For tourist areas, what the experts recommend!! [Video]

Mykonos TickerLeading news source for Mykonos and the Region
Mykonos Tciker Breaking News
Extraordinary meeting in their aftermath 50 new cases of coronavirus!! Alarm has sounded in government and experts after the increase in new cases of corona in Greece in recent days, at a time when it is on the rise in the Balkans, but also in many countries of the world……

Simultaneously the government, through the government spokesman beats the alarm bell and asks citizens to be careful so that the tourist season is not endangered, while on the other hand it even relaxes the measures, abolishing their limit 6 people in restaurants, but also the mask in commercial.

What to expect from the emergency conference call

What is troubling is that 7 new cases were in Attica and 6 in Thessaloniki.

Officials note a general easing of coronation social distancing measures, However, this is not the only problem since the enlarged opening of tourism on July 1, and the measures are constantly relaxing., giving specific messages.

In fact, it is not unlikely that new measures and new restrictions on the coronaio will be implemented.

Plan B for the coronaio, aimed at tourist areas

According to reports, in the government there is not only calm, αλλά και «Plan B» για την αντιμετώπιση μιας ενδεχόμενης έξαρσης των κρουσμάτων κορωνοϊού.

2. Checks on seasonal workers in our country, mainly from the neighboring Balcan countries.

3. Τεστ σε όλους, in all the entrance gates of the country.

For their part, infectious disease specialists point out that while the coronavirus is on the rise in the Balkans., So far, Greece has managed to limit it and locate it at the border.

In other words, the fact that most cases were detected before tourists arrived at their destination is a very important step to prevent the spread of the virus..

Of course, despite the fact that the two important problems of the experts are the Promachonas and the festivals, does not mean that there are no other open fronts.

Because the increase in cases is dangerous for our country

Concerns are growing among experts and the government about the increase in coronary heart attacks in Greece.

And if, the "imported" cases, were considered expected due to tourists, the spread of coronavirus in the community and the recording of cases of undetermined origin - the so-called orphans, εντείνουν τον προβληματισμό.

In this context, come true, Friday noon, extraordinary government meeting under the Prime Minister, Kyriakos Mitsotakis, on the subject.

Professor of Infectious Diseases and Pathology at the University of Patras, Charalambos Gogos, commented on the increase in corona cases in "MEGA Time Society".

As noted, there is concern about the increase in Covid-19 cases in the community!!

"We have to be very careful. Greece must not have cases. It has an aging population with chronic diseases. Αν νοσήσει ο πληθυσμός μας δεν θα έχουμε ασυμπτωματικοί φορείς. We will have patients who will be admitted to hospitals and ICUs. That's why we need to tighten our belts, "he said.

Hence, the professor emphasized, that if the epidemiological situation in the country worsens, "Many scenarios are being considered," such as "lifting some restrictive measures.", the closure of the interiors but also the supervision for the masks ".

Alongside, pointed, that the possibility of suspending festivals and polarizing rallies that "are among the main causes of basic dispersal" is being considered.

Regarding the "imported", due to tourism, outbreaks, He said they came mainly from Balkan countries.

"There is an influx of tourists. It is expected. Five in a thousand are positive for the virus, "he said, stressing the need to increase the number of tests performed at the border "up to 100%", while leaving open the possibility of closing some gates to the country.

If we continue like this in August, we will have a second wave

His concern that if this rate of increase continues, in August we will have the second wave of the pandemic, said the Infectious Diseases Specialist, Marios Lazanas.

"If we continue like this, in August we will have a second wave of corona. Local lockdowns on the islands are not excluded.

That is, if there are too many cases on an island, what will happen?;», said Mr. features. Lazanas in SKAI, while he added that yesterday 50 cases “hit not one, but a lot of bells ".

He called for stricter measures when talking about universal controls and "health passports" at all entrance gates, but also in the general population noting that the problem is "mixed".

"Because the country cannot live without tourists, some measures must be taken to make them safe.

The first issue for tourists They are the control at the entrance gates!!It is a matter of government decisions, but infectious disease specialists would like it to be done universal control not only at land borders, but at all entrance gates. We wish there was a health passport. With coming tourists and they can be positive and most of them are asymptomatic, but they transmit, they go somewhere, do not sit for the required 24 hours, they may spread to the community and there is the first problem with the imported ", said the infectious disease specialist.

"It simply came to our notice then, medicines, prevention is necessary. Keeping distance at 1,5-2 meters", Mr. reached. Lazanas.

At a time when many infectious disease specialists are worried about the festivals, the President of the Hospital Patras Association, Matina Pagoni referred to need to ban festivals, as -according to her- the required distances cannot be observed!!

"The festivities are beautiful, αλλά δεν είναι για αυτή την εποχή. Κανονικά πρέπει να απαγορευτούν. There is no festival with a distance ", he stated characteristically, speaking to SKAI.

"I'm concerned about a relative relaxation" stressed the Minister of Health Vassilis Kikilias, speaking to the Star.

"We want to support our compatriots, but with respect to the health protocols and the handling that proved to be successful "he also commented.

Kyriakos Mitsotakis made a special mention of this issue yesterday from the floor of Parliament. The Prime Minister stressed that the government is assessing the situation and is ready to take additional measures, while adding that the need for vigilance by all is greater than it was a month ago. We now know that as long as there are tourist flows, there will be incoming cases.

To minimize the number of cases and not to have outbreaks, it is necessary to observe the restrictive measures, The Prime Minister said that despite the fact that society is tired, we must still be vigilant..

We need to be concerned about the phenomena of relaxation, said Mr.. Mitsotakis and explained that the controls will be strict and systematic in tourism and catering. Sanctions will also be imposed, added and talked about the need to comply with health protocols and use a mask.

Informing political authors, government spokesman Stelios Petsas rang out a "bell" of danger and left open the possibility of new measures, without going into more detail.

"It simply came to our notice then. We are determined to show that action must be taken. We will wait these days and especially until Monday to see the result of the complacency effort.. We are ready to take any necessary measures. ", he pointed out and added that "whatever measures we will consider after the weekend", said Mr. features. Petsas.

Furthermore, After appealing for the observance of the measures and recommendations of the experts, he stressed that "if we relax and allow the cases to increase, economic costs will be multiple and we will risk losing in August and September, two months expected to breathe new life into tourist areas ".

126 New confirmed cases of coronavirus cases, and a new death were recorded in the last 24 hours in our country, bringing the total cases to 5.749 and...
Read more