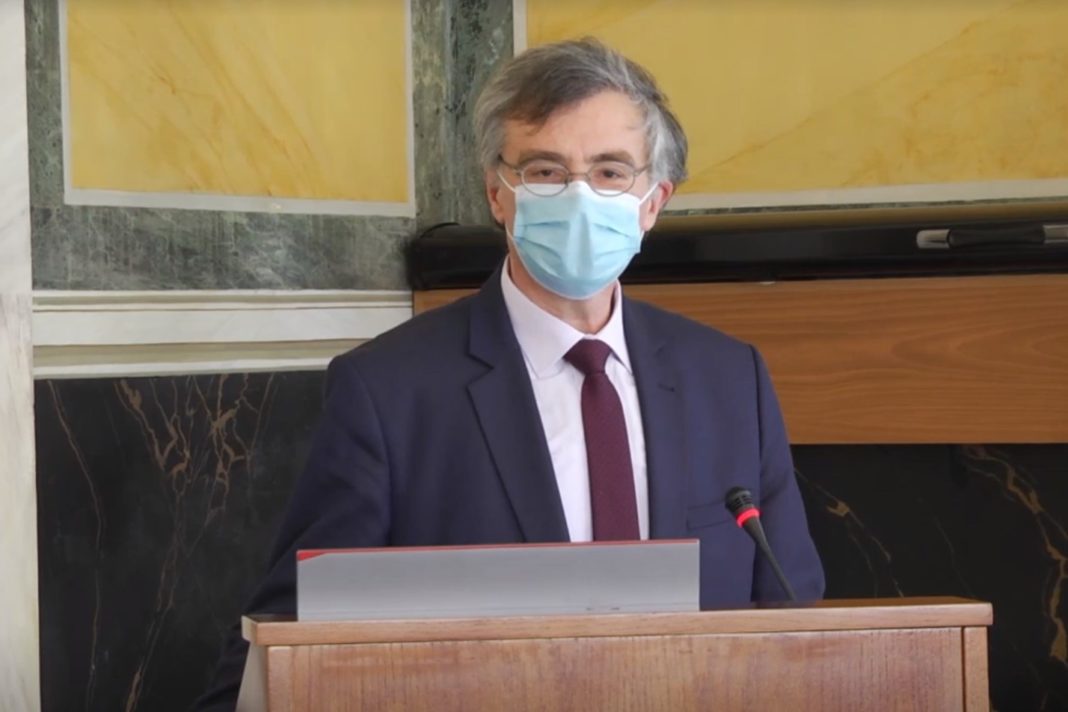 Coronavirus Pandemic – Tsiodras: Implement measures until vaccinations are completed!! One on 100.000 possibility of thrombosis from AstraZeneca!!

Professor Sotiris Tsiodras in a speech at the Academy of Athens referred to the effects of the disease and the need to complete vaccinations to address the pandemic. Implement measures until vaccinations are completed - The 10% of the Greeks has "stuck". Easter with over 1000 intubated is expected from infectious disease specialists……

"We will continue to have measures until the vaccination program is completed" and "the return to normalcy will take place (…) guided by epidemiological surveillance and by optimizing measures at the lowest possible level ", said in a speech o Correctρof Tsiodra, considering that the coronavirus came "to stay".

to 1.200 intubated are expected to arrive the week immediately after Easter in between 3-10 May, if the disease replication rate known as Rt remains low, in the 1,1.

Until last December, had been infected about 10% of the population of the country, according to an epidemiological study by the professor of epidemiology at the University of Larissa Chr. Hadjichristodoulou.

Experts estimate the actual cases to be between 6-10 times more than what is confirmed daily.

Vaccines work at the real level of our lives, reducing new cases and hospitalizations, but we must continue to implement the measures until the vaccinations are completed.

The above was emphasized by the professor of Pathology, Infectious disease specialist Sotiris Tsiodras at an event at the Academy of Athens as part of his speech on the uncertainties that remain a year after the start of the pandemic.

The professor left open the possibility that the coronavirus would remain endemic and the epidemic would not disappear., stressed, however, that with epidemiological surveillance and optimization of measures to achieve a consistently low number of infections.

Mr.. Tsiodras stressed the long-term effects of the virus on the body as it affects the central nervous system, starting from causing atrophy in the olfactory nerve, creating risks for stroke, while he is also accused of causing peripheral paralysis from Guillain Barre syndrome.

It is currently spreading through the ages 20-50 years, are now recorded 500 admissions per day to hospitals and as long as they do not follow a corresponding course of hospital discharges, then the pressures on the health system increase.

Corresponding study by Professor of Epidemiology B.. Sypsa assesses the risk of death in 1,15%.

Explaining the impact of the disease reproductive index, Mr. Tsiodras noted that if there are 1000 cases and the index Rt is 1,1, then to 60 days, the cases have reached 25.000.

Significant findings have been recorded regarding immunity. According to Professor, although the antibody titer decreases as the disease time clears from the virus, Nevertheless, antibodies do not lose their neutralizing effect. Alongside, are also assisted by The Cells (memory cells), resulting in at least the 95% of humans to maintain three of the five strands of immunity. As for cross-immunity, this has been confirmed by at least five studies in the US, Netherlands, Germany and Singapore.

Regarding self-tests, the professor stressed that the result is not guaranteed, but even just the 25% of incidents isolated, then there will be benefit.

As in our country now prevails the British executive, Mr.. Tsiodras stressed that he is against 50% this strain is more contagious and probably causes more serious disease. Nevertheless, most deaths are expected, due to increased transmissibility. This is a strain that has been observed in 114 countries with a large dispersion, and the current weeks will be the prevailing variant. There is cross-immunity, but it seemed to exist 61% above risk of death.

See the whole speech of the teacher:

Tourism Season 2021: Six out of ten will only travel if they have been vaccinated!! What Booking research shows for the summer!!