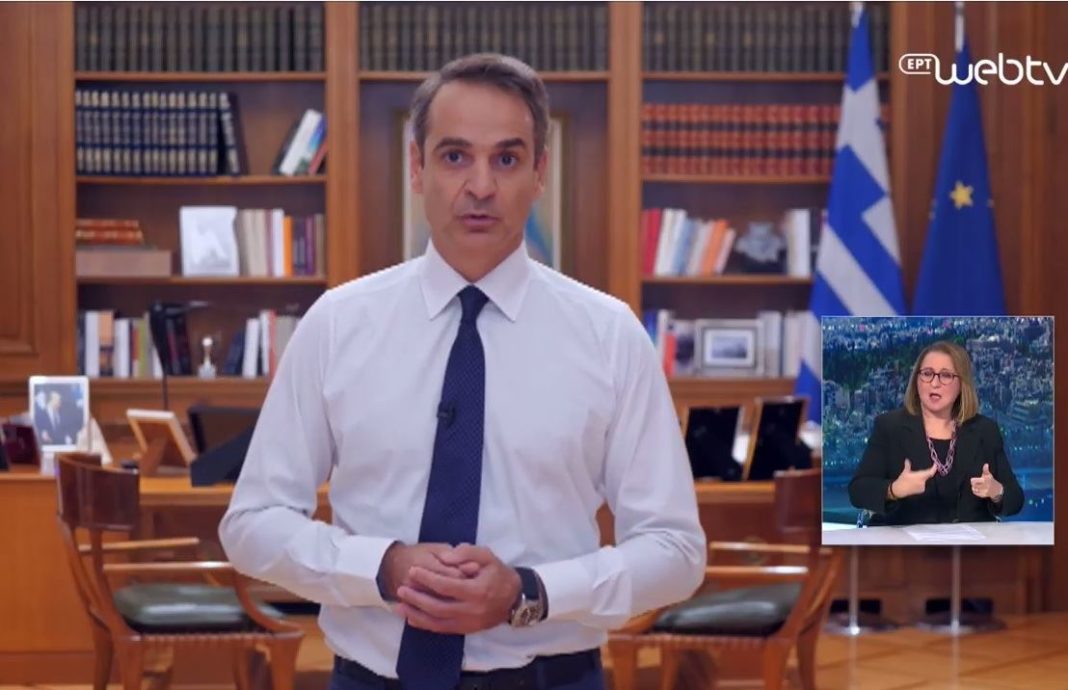 Mini lockdown with night traffic ban and masks everywhere, in areas marked with orange due to coronavirus, Kyriakos Mitsotakis announced in his speech.

The Prime Minister said that he would try to speak as simply as possible about the current reality. He said that the increase in cases is due to the many tests that are performed, but the virus in many areas is transmitted at high speed………

He stressed that the second wave is more severe and concerns young people a lot. The Prime Minister said that traffic is prohibited from 12.30 after midnight to 05.00 in the morning and the use of a mask becomes mandatory everywhere.

The whole message of Kyriakos Mitsotakis

my fellow,
I will contact you again, as the second wave of the pandemic is on the offensive. Everywhere in Europe, but now also here in Greece. I have to present the situation with absolute sincerity. To point out the dangers. But also to show the way of defense that we must follow. Based on the advice of science. Guide, the measures of the State. And a steady lever of discipline, because individual responsibility is the other side of social solidarity.
I will try to talk as simply as possible about today's reality and how we will deal with it.

In recent days we have seen a sharp increase in cases. To some extent, this is due to the increase in the number of tests performed. Just yesterday, for example, became more than 24.000 throughout the territory. But it is clear that in several areas the virus is transmitted, already, With high speed.

The data show that even in this new health crisis, Greece still resists better than most European countries.. Now, we have more knowledge about how the virus is transmitted. We have innovative case detection and tracking systems. We have a larger number of intensive care beds. And many more doctors and nurses in our hospitals. I thank, thank you, one more time, for your daily fight.
But all this is not enough. As I said, the second wave is stronger.

Affects, most, all ages, but especially the young. And it penetrates regions, cities, even neighborhoods. By vehicle, unfortunately, social life itself: The daily contacts between us and the simple habits of leisure and fun.

Look out: Experts warn that in times of carelessness we become more vulnerable to the virus. Conversely, in schools, where the measures are meticulously observed, the risks turn out to be much smaller.

I want, Well, to be clear: The coming months are forecast to be difficult. And since it is not my choice a general "lockdown", other measures are required. Smarter. More targeted. And, after all, more effectively.

Our target, consequently, remains not the absolute suspension of our activities. But the local reduction of the dangers that threaten them. To CONTINUE, namely, the rhythms of our lives but based on the rules indicated by experts. Making small concessions to protect the great good of health.
Greece has, most, a map with the levels of transmission and transmission of the coronavirus and the measures involved in each. These have limited costs for the economy. They offer, Nevertheless, huge profit in collective prosperity. That is why they must be observed faithfully.

Our plan, however, is dynamic. Which means it adapts to the pandemic outbreaks and the local peculiarities it presents. In the new coronavirus attack, Well, and after the suggestions of the experts, we respond with two new measures:

First, in areas with a dangerous increase in cases, those of levels 3 and 4, traffic will be prohibited from 12.30 after midnight to 5.00 in the morning. excluded, sure, those working at night and emergencies.
Target, reduce travel and evening gatherings, which favor the transmission of the virus. With less fun, maybe, for a while. But with more health for a long time. A prediction that already applies, besides, in many European capitals and regions. And the first report is encouraging.

Secondly, the use of a mask becomes mandatory everywhere. Not only indoors but also outdoors. Because the coronavirus lurks everywhere, without waiting at the entrance of a store. "He does not eat door", to speak the language of the younger ones.

To put it simply, and we will enter the cafe or restaurant, hereinafter, with mask. Which we will remove only when we sit at the table. And of course the ban on standing in indoor rooms is still in force.
I will repeat it: The mask is the vaccine before the vaccine. If two citizens wear it properly and one is infected, the chance of transmission when they are together is infinitesimal.

The two new regulations will be accompanied by the strengthening of controls for compliance with existing measures. Store owners who do not comply, as well as employers who do not protect their employees, will be punished. And, certainly, teleworking will expand even further, where feasible.
The effort is great. The aggravation of the problem, Nevertheless, requires more intensity. Especially in the direction of business people who are illegal in the field of entertainment. There, control mechanisms will exhaust all rigor. Because health cannot be sacrificed on the altar of the profit of some unconscious. Neither, sure, it's time for secret parties, when the virus is partying against our lives.

The implementation of the two new measures starts from 6.00 Saturday morning. We could wait; Maybe, as the situation here remains comparatively better than other countries. But from the beginning we decided to move cautiously. And that is becoming even more important now, in view of the Christmas season.
Today's data is clear: The spread of the virus is mainly found among young people. And it focuses on the hours and places where they gather.
From there, Nevertheless, transferred to the domestic environment, disproportionately threatening the older ones. That's why I ask the younger ones to be careful. And keep their distance from their parents and grandparents, regardless of whether they themselves have symptoms. An easy adventure for them may be fatal for those who love.

This is not a vague feeling or a blind complaint, but substantiated finding. And I address it with the same sincerity with which I speak to my children. Why, actually, it is time for our youth to speak and act.
I know that all the previous months the Greek children have been tired. I understand the freshmen who went through a difficult winter and want to party. As I know that the blood of the students boils. And so it must be.
In this context, however, you young people would do well to turn your momentum into a responsibility. Be a pioneer in difficult times. Making a lifestyle consistency. And finally become you examples of discipline for the older ones.
This, besides, it also means the youthful questioning of conservative individualism. Genuine progress and true radicalism. I'm asking you, in other words, to become the real protagonists of our days.

my fellow,
The government will continue, certainly, to support companies and employees affected by the health crisis.
The Refundable Advance provides the necessary liquidity to hundreds of thousands of businesses. Insurance contributions are reduced. And a new program fully subsidizes them for 100.000 new job positions. While the abolition of the Solidarity Contribution also comes to further alleviate income.
Nevertheless, our arsenal is not inexhaustible. And the national economy must continue to function to feed society, but also Health.
We have a difficult quarter ahead of us. I will close, however, with an optimistic message. Because for the first time since the beginning of this adventure, the prospect of having a safe and effective vaccine is on the horizon.. And the government has made sure we get it on time and make it available to everyone, at the maximum possible speed. Simultaneously, proceed according to plan and flu vaccination.

At his beginings 2021, consequently, along with the new year, A new day in the war against the coronavirus may dawn. Until the victory of science, however, we must hold the shield of responsibility.
I do not ask you to do anything more and nothing less than what we did in the spring, when Greece became an example to follow. And now, as then, we are side by side. A united team 10 millions. But, just like in any team, everyone - State and citizens- has its role. A- one and all together we can make a difference.
I'm sure we will make it again.

Nationwide lockdown, until 30 November!! All of Greece turned gray!! Which measures will apply from Saturday, what stays open and what closes!! In...
Read more

This is the travel form for Freelancers, which they need to have with them, during the lockdown. Analytically, the new ...
Read more

Weather Forecast: The temperature drop is noticeable on Saturday!! "Crazy" winds in the Aegean!!

Rains in the eastern mainland and the Central and South Aegean are expected on Saturday 7 November 2020. The temperature will not change significantly. Βορειοι ...
Read more

800-euro benefit: Allowance up to 800 euro – When do payments start? – The whole schedule

Coronavirus Pandemic-Lockdown: What it takes to avoid recurring lockdowns

Mosialos: What it takes to avoid recurring lockdowns. What does it depend on so that Greece does not enter into repeated lockdowns ..... The estimate that you will ...
Read more
Science & Tech

What applies to Individual Sports in general, Team Sports and Championships, after the announcements and in view of the new Lockdown ..... Clarifications for ...
Read more
View more