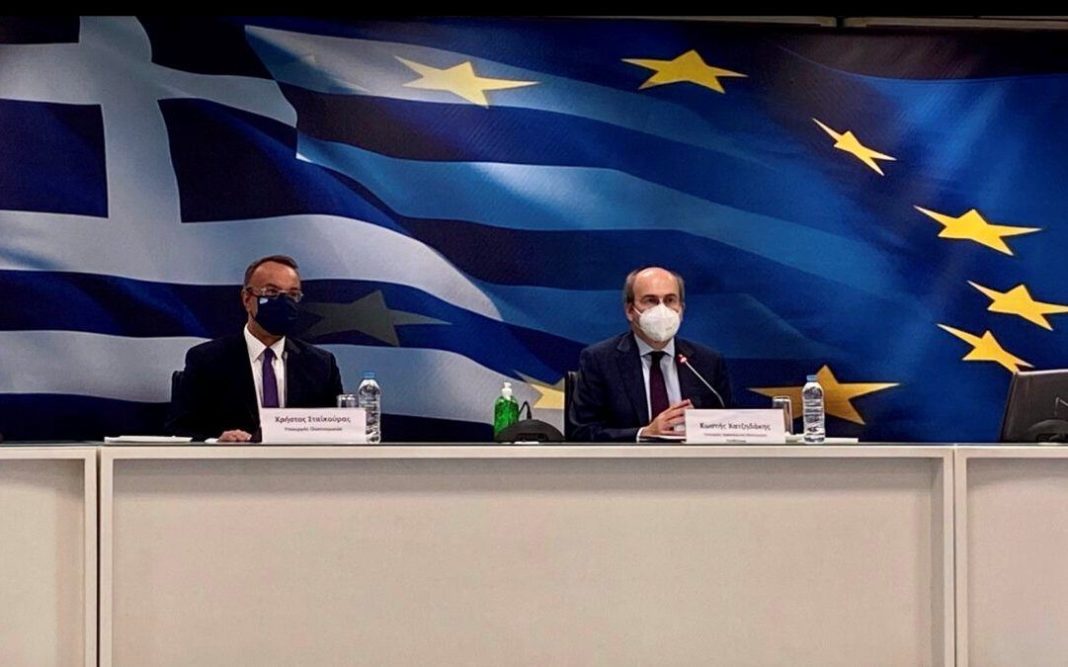 Covid-19 Financial support: All support measures for April – What about the Easter gift

over 14 billion. euro, or almost double what is budgeted for (7,5 billion. euro), the cost of measures to address the economic consequences of the pandemic will be in full swing this year.

Especially for April, additional interventions by extending support measures, as announced today by the Minister of Finance Christos Staikouras, amount to 1 billion. euro…………

particularly, these interventions are as follows:

1. For companies in which restrictive measures have been imposed and are directly affected, the payment of installments of regulated tax contributions is suspended. The dose is transferred at the end of the adjustment.

Specifically, for April will apply to companies that have been subject to restrictive measures and are affected by the end of March, including retail, of catering, tourism, of the civilization, of sports, of Transportation, and other industries that remain closed.

2. Companies in which restrictive measures have been imposed and are directly affected, are entitled to a mandatory rent reduction by 100% in their commercial real estate and for April. For owners natural persons and legal entities that lease real estate to these companies, compensation will be paid to 80% and 60% respectively of the rent.

For employees whose employment contract is suspended throughout the territory, rent discount is possible 40% for the main residence and the student residence of these dependent members.

For April, will apply to companies that have been restricted and affected by the end of March, including retail, of catering, tourism, of the civilization, of sports, of Transportation, and other industries that remain closed. Especially for April, Compulsory rent deduction continues for companies belonging to the extended list of affected KAD April 40%.

3. It is being routed, under conditions, the payment of double compensation to property owners within b’ ten days of April, for both February and March.

particularly, for March, and for leases concluded up to 31/1/2021, advance payment of compensation based on the "COVID February" declaration, provided that the following conditions are met:

– The lessor- a legal entity has not declared a cessation of operations to the AADE.

– The tenant- company has not declared a cessation of operations to AADE.

– The tenant- employee to be suspended from employment for March.

– A "COVID Declaration" must have been submitted for these leases in February.

And, also, the other legal conditions are met.

To safeguard the public interest, A framework will be established for the return to the State of unduly compensated compensation.

It is noted that with last week's payments, the total number of offsets and compensations is approximately 971.000, and the total amount paid to property owners is 180 million. euro.

Alongside, opened and will remain open until 19 April, the platform for submitting amending declarations by property owners, to correct any errors or omissions.

4. The deadlines for the affected companies are suspended, appearance and payment of securities due to them (checks, foreign exchange, bills in order) against 30 days from the listed- in each security- date, for deadlines expiring on 30 April this year.

Respectively, deadlines for payment of certified debts by VAT returns for securities bearers are extended, based on criteria.

The Minister of Finance reminded, alongside, that with decisions already made:

– Shifted, for 1/7/2021, the start of the mandatory digital transmission on the Electronic Books platform- MyDATA.

-The electronic submission of the consolidated statements of MYF 2020 extended to 17/5/2021, and the correction of discrepancies in the supplied suppliers' data is extended until 18/6/2021.

– Withdrawal and upgrade of cash registers is extended until 30/6/2021.

According to Mr.. Staikouras, the government will continue to support the economy and society as long as the crisis demands it, while the financing of total interventions amounting to 38 billion. euros for the period 2020- 2021, supported, mainly, in insight, rational and prudent use of the country's cash. particularly, he said, that while the budget execution records budget deficits for months, it is possible to support the economy through systematic and low-cost lending financing from international markets (total height 22 billion. euro). However, drew attention to the fact that a country's borrowing costs depend on endogenous and exogenous factors, that some can be controlled and others not. And for this reason, concluded, "We must be careful and prudent", so that there is no budget derailment.

K. Hatzidakis: Labor market support measures in April – We maintain the protective regulations for the employed and the unemployed

"With the measures we announce today and what preceded the last twelve months, the Greek State stands up to the circumstances. It responds to the needs of the economy and society created by the pandemic "said the Minister of Labor and Social Affairs Kostis Hatzidakis, announcing labor market support measures today in April.

Mr.. Hatzidakis, after reminding that our country had the second best performance in Europe in curbing unemployment in the last year, stated that this was achieved thanks to the measures adopted by the government as a whole and the Ministry of Labor in particular.

"While we are preparing for the next day and “piping” of the economy, we maintain in force for the next month of April the protective regulations for employed and unemployed, as the epidemiological data do not yet allow their removal. With the measures we announce today for April, the budget for “protection net” only by the Ministry of Labor exceeds 7,1 billion, while the beneficiaries only from the actions of the Ministry of Labor exceed 3 millions ", stressed the Minister of Labor.

as told, "The measures for April have an estimated cost 695 million. euros and include the following:

1. Employees in companies across the territory are significantly affected, may be temporarily suspended from employment and are entitled to special purpose compensation in proportion to the period for which they are suspended, calculated on an amount 534 month euro. For the above period, the full insurance contributions are covered proportionally by the state budget., calculated on the nominal salary.

The expanded list of Activity Code Numbers will continue to be used for April (CAR) March for the affected companies with the same criteria as in March and for the companies that remain closed by order of a public authority, without criteria for inclusion in the measure of suspension of employment contracts of their employees. Cost 330 million. euro.

An Easter gift is given on the special purpose compensation, in proportion to the days of suspension, in the period January-April 2021. Cost 210 million. euro.

2. For the affected companies, the payment of not only certified taxes will be suspended for a month, but also certified insurance contributions.

3. Employers' insurance contributions of employees in 12-month hotels are subsidized until June 2021. Cost for an additional three months: 3 million. euro.

4. The artists, which are included in the register of artists, will also receive special purpose compensation for March 2021. Cost 16 million. euro.

5. The subsidy of culture for vacancies in theaters continues, cinemas, music scenes and venues for concerts and performances until March 2021. The cost of the extra three months is 19 million. euro.