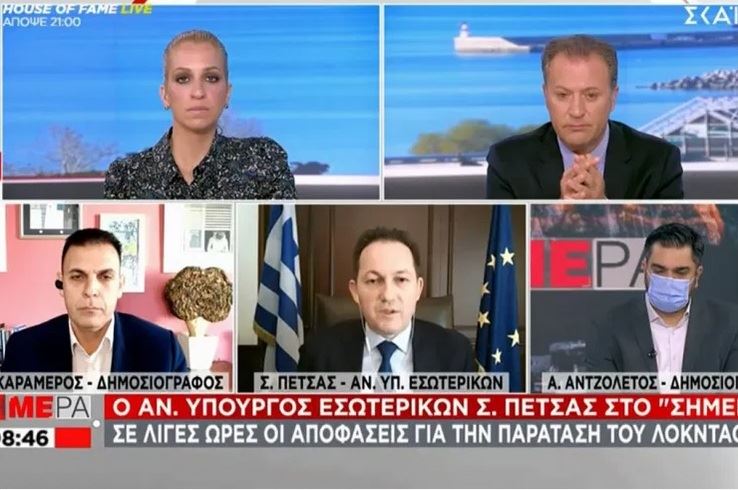 The Armed Forces and the Security Forces, small islands are not included in the reserve lists because vaccinations on these islands are horizontal and therefore vaccinated in series………….
There is no irregularity in the case of the vaccination of the South Aegean Regional Governor George Hatzimarkos, out of order, last Sunday in Halki.

The Deputy Minister of Interior Stelios Petsas, Asked by the journalists of the show "Today" on SKAI TV, for the incident that emerged in the last days by the opposition and the media, did not leave the slightest suspicion of irregular vaccination of the South Aegean Regional, instead, explained the process of vaccination in small islands, where it is known to be horizontal and universal, for all residents and without the categorization that applies in the rest of Greece.

For this reason and so that no dose of vaccine is wasted, the vaccination process involves the replacement mechanism, that is, backup lists of people who could be vaccinated if they wished, while not included in the original lists.

The reserve lists mainly include people from the Armed Forces and the Security Forces serving on the islands., and with suggestion Petsa, where this number is not sufficient, then the possibility of vaccination is given to Local Government officials. In the case of Halki, however, where the Armed Forces and the Security Forces had already been vaccinated and therefore they did not have the opportunity only through the reserve list but were included and vaccinated in the previous two days.

Specifically, replying to a question, Deputy Interior Minister Stelios Petsas said: "In the matter of vaccinations there is a key parameter which is the backup lists. Backup lists have to do with the fact that a vaccine may not be made from what it was supposed to be made and not thrown away., to be able to be done by another of our fellow citizens. The reserve lists mainly include people from the Security Forces and the Armed Forces. Myself, as a local government officer I had previously suggested, because this cannot always be controlled locally, that is, to exist a sufficient number available from the Security Forces and the Armed Forces, there should also be Local Government executives, that because it is there, to be able to do the vaccine, instead of being thrown away. Regarding the incident with Mr.. Hatzimarkos, concerns a very small island, where we have gone there to do mass vaccination, of all residents ”.