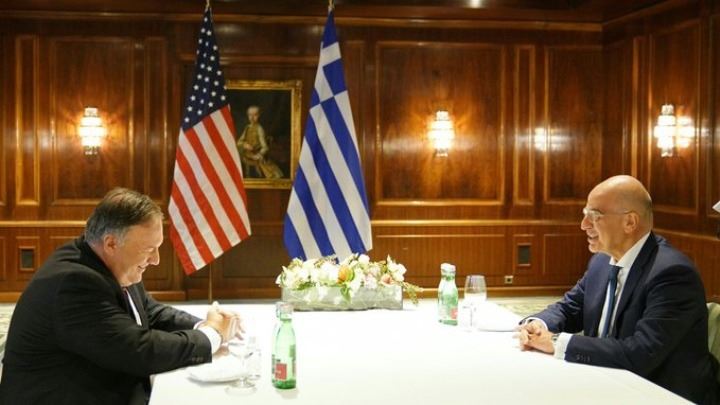 East Med Tensions-Dendias: Turkey is solely to blame for the escalation of tensions in the East. Mediterranean

Turkey is the only one to blame for the escalation of tension in the Eastern Mediterranean and must leave the Greek continental shelf immediately, Nikos Dendias stressed at the EU Council of Foreign Ministers and US Secretary of State Mike Pompeo………. This, made clear Mr.. Dendias, It is an inescapable condition for us to be able to escalate the situation and noted that this position is shared by all his interlocutors and was confirmed by the current Extraordinary EU Council of Foreign Ministers..

Referring to the meeting with the US Secretary of State held in Vienna, Mr.. Dendias said that he developed the situation prevailing in the Eastern Mediterranean and stressed: "The clear position of the State Department does not allow the slightest misinterpretation.

I had the opportunity to thank him for this clear position of his ministry and the American side. ". He further pointed out: "as known, Turkey is escalating its delinquent behavior. It thus seeks the imposition of accomplishments. Turkey is militarizing the situation. It exposes in the most obvious way, the lack of legal arguments on its part ".

In this context, The Foreign Minister expressed his satisfaction with the condemnation of the illegal Turkish behavior and with the support expressed again by the partners to Greece and Cyprus.

With,on the list of sanctions requested by the Council from the EU services, informed that it is being prepared and stressed that it will be the subject of the forthcoming discussion of the Foreign Affairs Council, in Berlin at the end of the month. In this, Mr.. Dendias said that our goal is to have a ready tool in the hands of the EU if needed, a tool to push Turkey back on the path to legitimacy and international law.

At this point, underlined that the Turkish leadership's pretentious calls for dialogue are constantly being refuted by the overt threats that always accompany them.

Focusing on the meeting of the Council of Foreign Ministers, He said that he presented to the Council with data the exact picture of the operational situation in the region, so that our friends and partners can find out what Greece is facing. Greece is a peaceful country, resolves any issues through dialogue and in accordance with international law, The Foreign Minister added that the recent agreements with Italy and Egypt prove this.. He added that Greece remains open to dialogue with Turkey, but not under the state of pressure and blackmail. Dialogue, he continued, conducted under the rules of international law and the law of the sea and on the only real dispute between us, not at all of the scientist.

End, thanked his Austrian counterpart, stressing that he found in Vienna a favorable ear for Greek views and noted that "our view was expressed in the clearest way by Austria during the Council of Ministers".

Reducing tensions in the Eastern Mediterranean at the heart of the Pompeo-Dendia meeting. The US-Greece bilateral relationship is strong

The urgent need to reduce tensions in the Eastern Mediterranean was at the heart of US Secretary of State Mike Pompeo's meeting with Greek counterpart Nikos Dendias in Vienna., refers to a State Department announcement and is added: The two ministers also discussed the strong bilateral relationship between the US and Greece.

Probably over the weekend or Monday at the latest, 14 September, ENFIA statements are expected to be posted on Taxisnet. The total amount that ...
Read more
Previous article Read the headlines and the back of the Sunday newspapers 16 August specially released tomorrow Saturday
Next article Watermelon!! The lord of the summer!! Ten Reasons to book!!
Share
Facebook
Twitter
Pinterest
WhatsApp
Linkedin
ReddIt
Viber
VK
Tumblr
Telegram
Mix
Digg
LINE
Email
Print