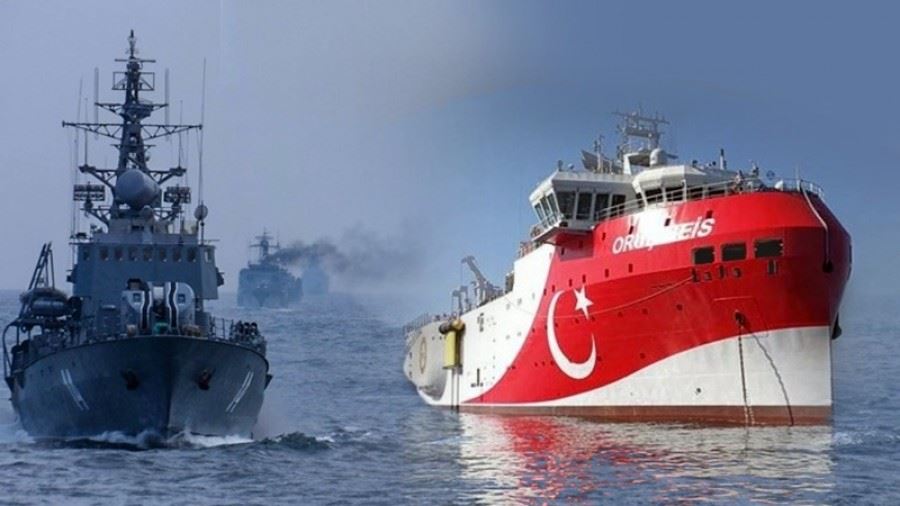 The delimitation of the Greek-Egyptian EEZ provoked the wrath of Turkey. Ankara threatens to retaliate with military measures. Interview with DW by German Middle East expert Stefan Roll………..

The signing of the Greek-Egyptian agreement a few days ago for the delimitation of the Exclusive Economic Zones (EEZ) of the two countries in the Eastern Mediterranean caused new tension with Turkey. President Recep Tayyip Erdogan and other Turkish officials have reacted strongly as the two countries' EEZs overlap in areas of the EEZ agreed between Turkey and the Libyan government in Tripoli last November.. Ankara warns it will use weapons if its demands are threatened. In an interview in our program, Stefan Roll, Head of the Near and Middle East think tank research team Berlin Foundation for Science and Politics, analyzes the situation that has been created.

Dangerous crossroads - Greece-Egypt EEZ and Turkey-Libya EEZ
The German expert admits that the conclusion of the Greek-Egyptian contract surprised him. For almost 15 years the two countries were negotiating the demarcation of the EEZ and suddenly on Thursday the foreign ministers of the two countries signed the agreement in Cairo. The rush, according to Stefan Roll, is directly related to the EEZ delimitation agreement signed by Turkey and Libya in November. 2019. Greece and Egypt considered it a serious threat to their interests. "The aim was to put a barrier in Turkey."

Mr. Roll, however, wonders if with the hasty procedures that were followed, Athens and Cairo manage to negotiate the agreement "to perfection". The fact is, however, that negotiations are continuing for the delimitation of the EEZs of the two countries from the area east of Rhodes to Kastelorizo.. But as he emphasizes, "It was of primary importance to send the message to Ankara that Turkey does not accept to define the maritime border."

Referring to the tension that prevails in Turkey's relations with Egypt, S. Roll points out that it is not recent.. "First of all’ it all definitely has to do with gas reserves. Its exploitation is important for Egypt. Egyptian energy strategy targets large-scale gas exports. In the end, however, the confrontation with Turkey has larger dimensions. " Its starting point is the military coup against the Muslim Brotherhood government in 2013.

Cairo suspects that Turkey continues to support it. Many members of the Muslim Brotherhood are in exile in Turkey. "The Egyptian leadership feels that it is seriously threatened by Turkey, accuse her of plotting a coup. " The current controversy has recently escalated due to Turkey's involvement in Libya.: "It is very threatening for Cairo that Ankara is suddenly stirring up inside."

Risk of armed conflict
Despite the fact that the EEZs of Greece-Egypt and Turkey- Libya partially overlap, Stephen Roll does not consider armed confrontation inevitable: "Neither Turkey nor Greece and certainly not Egypt are looking for an armed conflict – above all because the result would be uncertain. " "But" points out Stefan Roll, "You never know what might happen in this area." "Suddenly, "Some shots are fired somewhere and suddenly this incident develops its own dynamics." But in principle, "no one is seriously interested in such a move."

Nevertheless, The fact is that the Egyptian parliament gave the green light to President Abdel Fattah el-Sisi for a military intervention in Libya. The danger of an immediate armed engagement in Libya with Turkish-backed forces is visible. Stephen Roll accepts the objection. "It simply came to our notice then, this must be taken seriously. However, I consider it realistic for Egypt to intervene in Libya with its troops.. Their goal will be to defend the existing fronts. This is not an expansionist strategy. No intention to advance to Tripoli risking a direct clash with Turkey. Egypt wants to support its allies, the forces around General Haftar. "

Who could take on the role of mediator?;
What external factors could intervene to de-escalate the tension created by the recent delimitation of the EEZs?; In the past, this role was mainly played by the United States. So far, however, Washington has not decided if and which side it will support: Turkey against Egypt and Russia or vice versa, estimates the German analyst. "It simply came to our notice then, there is a new development. US-Egypt relations are not as good as they used to be. Cracks have been created. Egypt behaves in many ways similarly to Turkey. Contrary to the will of the USA, Cairo bought like Ankara, Russian weapons systems. "Everyone is playing their own game and not taking into account the traditional alliance structures."

But the EU also seems to be failing as a mediator. It lacks a united stance against Turkey. France, for example, has clearly taken a stand against Ankara, other Member States take a different stance. Whether Germany could take on a mediating role; It would be acceptable to all involved; "Acceptable yes, because the Germans clearly have no interest ", believes Stephen Roll. "The question, however, is whether Germany has enough prestige to bring results to this region. Έχω σίγουρα αμφιβολίες για αυτό.» Η «Διαδικασία του Βερολίνου», An initiative launched by Germany to resolve the civil war in Libya has so far not yielded tangible results. The battles continue, the arms embargo is not being met. "Germany is not strong enough. At the moment it can only help in the short term in an acute situation. " Stefan Roll cites as an example the phone call between Chancellor Merkel and Turkish President Erdogan a few weeks ago that helped prevent an armed conflict between Turkish and Greek warships in the Aegean..

Arab world and Israel
Referring to the role of the Arab states, Stefan Roll notes that those who are not immediate neighbors are not so interested in the issue of EEZs.. Their attitude is determined by a general controversy. Qatar is on Turkey's side, operates a Turkish base on its territory and supports the Muslim Brotherhood. Saudi Arabia and the United Arab Emirates are on the side of Egypt and have a negative attitude towards Turkey. "The states of North Africa, on the other hand "points out Stefan Roll, "They remain largely neutral, "They do not take a direct position and eventually try to maintain good relations with both sides."

Israel's silence on everything is impressive,as for the controversy over the EEZs – although it has direct interests. It has concluded an EEZ agreement with Cyprus and has apparently reached an informal agreement with Lebanon and Egypt on who is entitled to which sea areas. Besides, For years, Tel Aviv has been the target of Ankara criticism. Because it does not interfere in the current controversy; Apparently because the Israeli government is facing major internal problems, says Mr.. Roll. Then relations with Egypt are ambiguous. Yes, they have improved, but in the long run there is complete ambiguity about how Egypt will evolve.. also, οι Ισραηλινοί ανησυχούν για την αγορά ρωσικών μαχητικών αεροσκαφών από το Κάιρο πριν από λίγες εβδομάδες.» Η πιο ενδιαφέρουσα χώρα για το Ισραήλ στην περιοχή είναι σύμφωνα με τον Στέφαν Ρολ, "Certainly Turkey. Financially it has more to offer and is therefore much more important to the Israeli economy. In fact, "Israel has no interest in worsening its relations with Turkey."
Deutsche welle -Panagiotis Kouparanis, Berlin