Mykonos TickerLeading news source for Mykonos and the Region
Mykonos Tciker Greece Education
On Tuesday 7/7/2020, locks the score of the students who took part in the pan-Hellenic ones 2020 and on Friday the grades will be announced in the schools all over the country while they will be posted electronically on https://results.it.minedu.gov.gr/…..

Score status when posted to school units will not indicate the nominal details, but only the candidates' codes and grades.

The Ministry of Education in the above relevant circulars, draws particular attention to the Directors of Education Directorates (DDE) and School Principals, so that the results are not disclosed in any way prior to their official announcement, which will take place on Friday 10 July 2020, after 13.00 pm.

Candidates will be able to see the results of the Panhellenic Examinations (Rating) through the special application Ministry of Education to the following address:

Candidates will need to enter their eight-digit code and four initial characters from the last name to access the results., name, their patronymic and metronome with capital Greek characters.

So far, the platform of the Ministry of Education, displays the following message: 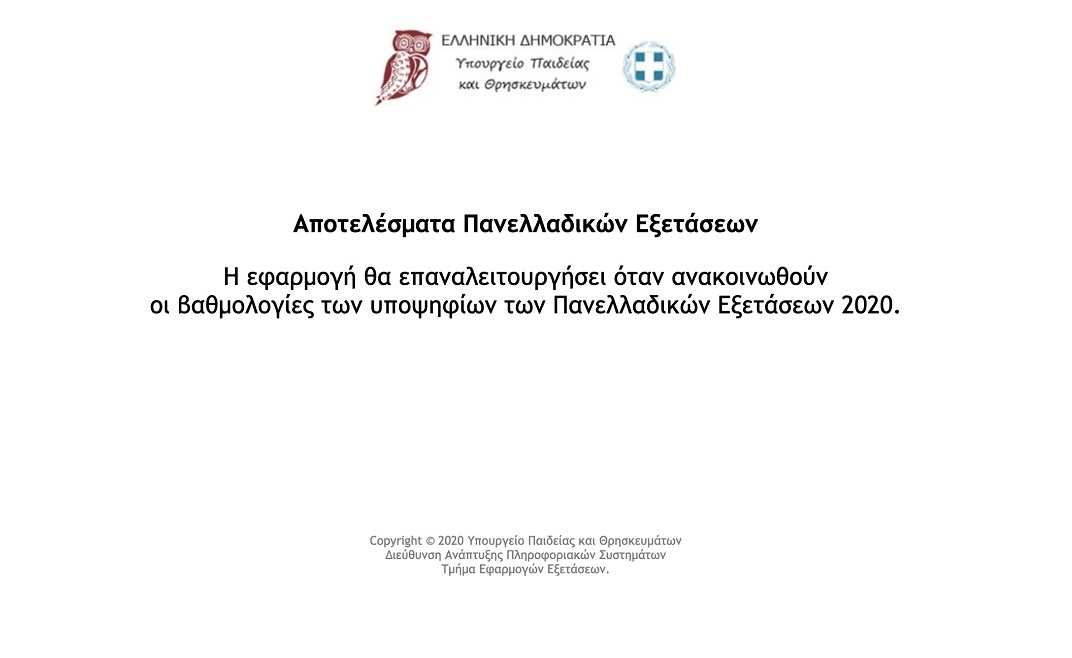 Completion and registration of the score - Sending points and scraps

The circular for the registration of GEL scores

Fundamentals 2020: How to move Legal, Luxury and Medical

They are expected next Friday, the official scoring data of this year nationwide exams from the Ministry of Education.

It seems that the course of the bases will be declining this year as well. After last year's loss of hundreds of points, mainly in polytechnics, the downhill, as estimated, continues this year.

Outbreaks appear to be exacerbated during this time, with estimates unable to pinpoint the trend of the bases. In high schools, such as Law and Psychology, the changes will be small while this year the foreign Philologies are expected below the base.

2The scientific field: Sciences and Engineering

Falling foundations in polytechnics, which will be even greater in the periphery.

Estimates point to a small drop in medical schools, due to the Chemistry course. It is recalled that last year the Medicine of Athens fell 18.724 and Thessaloniki in 18.585 molecules, while the latest Medicine recorded 18.123 molecules.

Economics schools may see a possible rise in the admission base, as this year's nationwide exams did not make it difficult for the candidates and good performance is expected.

Reopen Retail Stores: Click away returns and stores on Monday!!

Taxation and Taxes: Finally the cash in the tax offices, for debts to the State!!

Coronavirus vaccine: BioNTech warns that maximum effectiveness is not guaranteed if the second dose is delayed

Aegean Islands: Meeting of Deputy Giannis Flevaris with the representatives of the employees at EL.TA