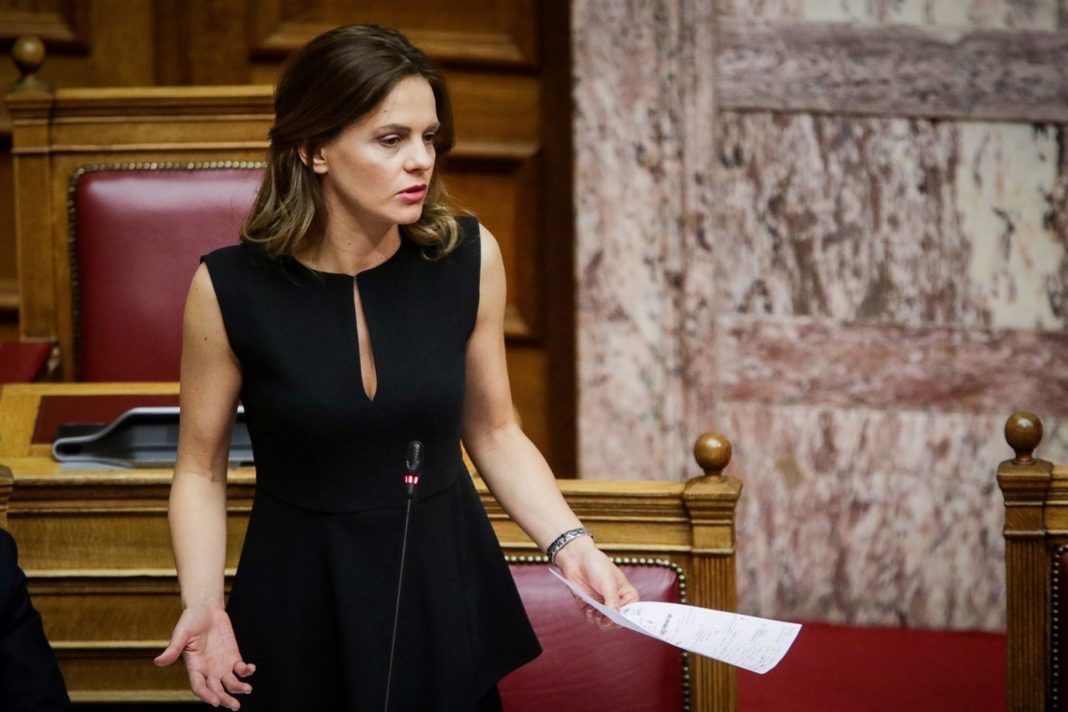 'Mr.. Mitsotakis seemed to wink in delinquency both in terms of basic labor rights -with reduction of controls for the violation thereof;, as well as,Regarding the checks made by the Financial Crime businesses for tax offenses', He said the lady, adding Achtsioglou: "There is a wider issue, as ND has a program -which tries to hide- and we saw the before 2010 and had as consequences led the country to bankruptcy ". He explained that "the position of SW for large tax cuts to big business and dividends, provided the program, is a measure which alone costs 1,5 billion.

At the same time Mr.. Mitsotakis winks in delinquency, to sweep obstacles to entrepreneurship '. This combination is prescribed by the state of the economy, said Mrs.. Achtsioglou and "it is good for people to know why the election campaign trying to hide". He noted, that the question is not whether Mr.. Mitsotakis used a wrong word but the essence of his program. Indicative said that the ND labor, never voted labor protection provisions. "The ND program is a mixture of many burdens and austerity policies for the vast majority of society", said Mrs. Achtsioglou adding that "contrary, SYRIZA's program is designed and costed and based on a balanced blend to stimulate development in conjunction with the protection and enhancement of the welfare state '.

He referred to the prime minister promises to create the next four years 500.000 new jobs saying that already the last four years there was a decrease in unemployment by eight percentage points and that from the beginning of the year recorded a record in job creation. He argued that the wage increase already applied SYRIZA had growth potential as stimulated consumption, unlike the ND project provides syrrikosi wages and labor rights are anti-development and furthermore would lead to a surge in unemployment. Continuing review of the ND program, He said that "constantly repeat to reduce costs and restore mnimoniakou 1 to 5 recruitment in the public sector. At the same time they say that they will do recruitment in Education and Health and the Police. This is in itself contradictory, as the 1 to 5 It leaves no room for the recruitment pronangelloun ".

In the same context -that Mr.. Mitsotakis tries to hide its program tou-, Ms has included. Achtsioglou and denial of ND President for debates with Alexis Tsipras. "It is crucial and useful for the world to see one debates the two leaders", he said and explained: "That's the dilemma and the question of elections, we have two programs and two persons claiming the premiership, the world must be seen to be able to judge. Mr.. Mitsotakis hiding from this dialogue because in addition to the difficulty to be faced by Alexis Tsipras, It has a big issue with the program. He wants to hide aspects of its program '. Continuing replied to Kostis Hatzidakis, having talks about rodeo, asking: "It is possible to think that a personal confrontation between the two leaders will be screwed or rodeo; We recommend a clean debates with rules to be agreed ". He noted, that "obviously, Prime Minister will also participate in debates on all political leaders ".

Asked about whether Mr.. Tsipras resign after any defeat in elections, Ms. Achtsioglou replied that «o Alexis Tsipras is political capital and place inspires and brings together progressive space. Made in previous years a large reversal in SYRIZA and in any case will be the rallying pole progressive space for Pola years ".

For Mr.. Kotzia said "made his own personal choice. With Mr.. Kotzia achieved a political victory extremely important for the country, the Prespa Agreement. It was very important the presence and the current decision does not invalidate that cooperation had been critical and important ".

And replied to the middle class, saying that "the middle class suffered in the period 2010 – 2014. A portion of the full led ftochopoiisi while the total of incomes fell 35%. In our period improved slightly their income, but mainly occurred stabilization. In the first period (SS. 2010 -2014) became poorer, in our own time we have stabilized but not more improved their situation and what may have caused their dissatisfaction ".

He referred to the behavior of the Change Movement saying: "The Change Movement had chosen until elections one monometopi attack on SYRIZA. This position is inconsistent with the expectations of the progressive world. There have been some developments with the departure of Mr. Venizelos advocated approach with ND. However, the leadership of KINAL insists on the tactic of confrontation with SYRIZA as if not understanding that one exists ND which rallies the conservative world and from other SYRIZA which rallies the progressive world. We will continue the democratic invitation to prevent the restoration of the Right ".

Finally in relation to the question that has been created by the diagnostic centers he said that "it is unusual to a blackmailing tool utilization diagnostic centers". He noted that practically major diagnostiria insist that "called to intervene in last year's budget". A question about whether behind this is Mr.. Patoulis replied that "the issue has political background and supported by very large diagnostiria"

The intercollegiate track and field championship of the Cyclades was held stubbornly and divided. 2020. The unions were divided into two groups as the transports between the islands ...
Read more
View more