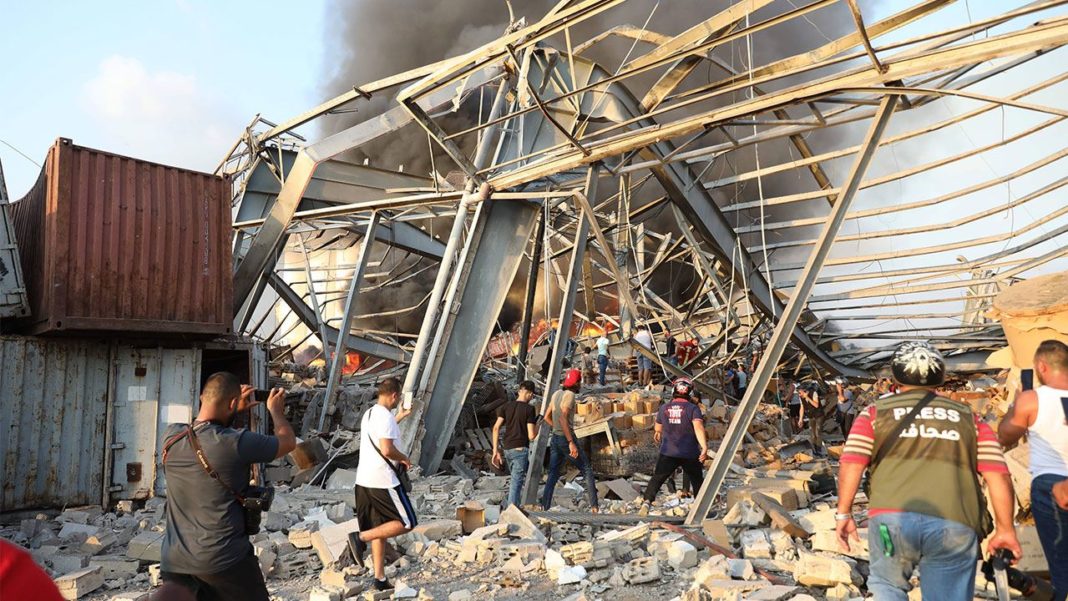 Authorities say the tragedy may have been caused by a large amount of ammonium nitrate being stored.
Rescue crews continued to search for survivors in a sea of ​​debris in the morning after the powerful explosions that shook the Lebanese capital yesterday afternoon., resulting in them losing their lives at least 78 people and injuring others almost 4.000, according to the Lebanese authorities, which warn that the toll of the victims may become even heavier during the day……….

Explosions in a warehouse in the port of Beirut where dangerous materials were found caused huge damage, plunged the Lebanese capital into mourning – country already severely affected by torture, prolonged economic crisis and the spread of the coronavirus pandemic.

Lebanese President Michel Aoun stressed last night that 2.750 tons of ammonium nitrate, chemical fertilizer that can also be used to make bombs, were left for "years" in a warehouse in the port without any security measures, which he described as "unacceptable".

The cabinet has convened an extraordinary meeting and at its meeting today is expected to declare a state of emergency for at least two weeks..

It has not been announced, officially at least, what exactly caused the explosions. A source close to the Lebanese security services said that it was probably due to welding that was done to close a hole in the warehouse where the ammonium nitrate was stored..

The head of the Red Cross and Red Crescent Commission in Lebanon spoke about the "huge disaster" on the Mayadin television network, George Ketani.

Hours after the explosions, noted about 18:00 (local time and time in Greece), a fire continued to burn in the port area, Orange smoke filling the sky of Beirut, while the sound of army helicopter engines and ambulance sirens continued almost non-stop.

To the elderly residents of the Lebanese capital, the catastrophe recalled the memories of the civil war (1975-1990) and its consequences, when the city was experiencing heavy bombardment, explosions of cars trapped with explosives, Israeli raids…

Some residents thought there had been an earthquake. USGS seismologists described the strongest explosion as equivalent to an earthquake 3,3 points.

Prime Minister Hassan Diab said authorities would conduct a thorough investigation to find those responsible for the blast at this "dangerous" warehouse and "pay the price" for their actions or omissions..

"There are many missing persons. "People are looking for their loved ones in the emergency room and it is difficult to find this overnight because the electricity supply has been cut off.", said Hassan.

The Beirut disaster comes three days before a UN-backed court issues its verdict in the trial of four suspects., associated with the Shiite Hezbollah movement, on the bombing that killed then-Prime Minister Rafik al-Hariri and others 21 people the 2005. The bomber struck shortly after noon in front of a police station 2 kilometers from the port of Beirut.

Israeli officials assured that Israel – which has been repeatedly involved in war with Lebanon – has nothing to do with the disaster and added that their country is ready to offer humanitarian and medical assistance.

Iran also offered their help – which maintains strong ties with Hezbollah – and Saudi Arabia, two countries competing for influence in Lebanon and the region, as well as several European governments.

During the interview he gave yesterday Tuesday to the White House, which was mainly dedicated to the efforts to deal with the coronavirus pandemic, US President Donald Trump calls Beirut bombings "horrific attack", talking about the explosion of "a bomb of some kind" citing officials, specialists and generals. However, two officials of his government, who spoke on condition that they were not named, noted that the first evidence contradicts the Republican tycoon's assessment that it was a terrorist act.