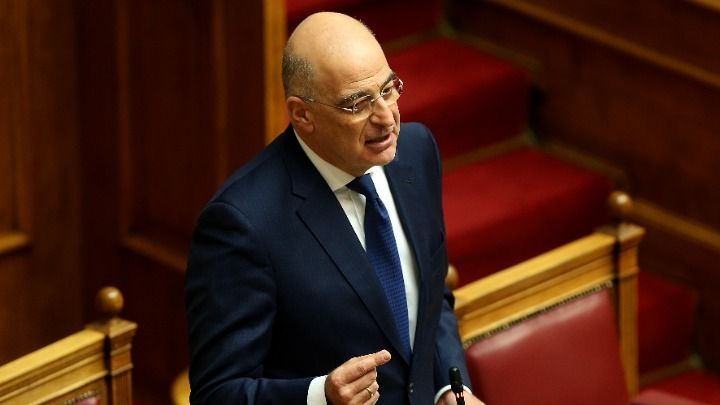 Extension of the Coastal Zone – FM Dendias: Expansion to the south and east of Crete. Territorial waters are a matter of sovereignty, is not negotiable

"The prime minister has been in office for months for the expansion of territorial waters in Crete. And of course Crete includes the eastern part of Crete ", said Foreign Minister Nikos Dendias, in his speech earlier in plenary……….

The Minister of Foreign Affairs, responding to a remark by the SYRIZA rapporteur George Katrougalos that there is a difference in wording, of the Prime Minister and the Ministry of Foreign Affairs on the differences between Greece and Turkey, he said: "The position of the country in relation to the Greek continental shelf, formulated by the law of Maniatis. Regarding the Exclusive Economic Zone, the supernatant of the specific continental shelf, in the specific area, the fact is real. It is not delimited by agreement, with one of the neighboring countries. I am referring to Turkey. That does not mean there is a divergence. ".

As for the interpretation of phrases of the prime minister, attempted by SYRIZA, on the issues that Greece could discuss with Turkey, The Minister of Foreign Affairs underlined that "no Prime Minister of the Hellenic Republic, whenever, the issue of territorial waters would not be negotiated, because it is a matter of sovereignty and not a matter of negotiation ".

"Neighboring countries understand the exercise of our right", "Italy knew that Greece would expand its territorial waters and that does not mean that Greece negotiated with them," he said.. And the Albanian Prime Minister, Mr.. Rama, in honor of making a clear statement, when he was criticized by the opposition, that it is an absolute right of Greece, as Albania has exercised its absolute right, without asking Greece ".

Nikos Dendias asked "to be recorded in the memory of the parties as a whole", the following: "There is no possibility for the country, for the current government, and for myself, to pursue a different policy, from the policy pursued by the Prime Minister, in foreign policy matters. That would be disastrous for the country. Consequently, Does not exist, but it does not mean ".

It was preceded by the rapporteur of SYRIZA George Katrougalos who said that "the expansion of territorial waters, actually, grows the country. But it must be part of a coherent strategic plan. ", and the Parliament must be informed about this. George Katrougalos added that it is necessary to expand the territorial waters south and east of Crete, "And not only in southern Crete, as stated by the Minister of Foreign Affairs ". He said that the expansion to the south and east of Crete must proceed, "To stop the illegal Turkish aggression, that we saw it manifest, with audacity between 6 and 12 nautical miles ". We are waiting to see how the prime minister will be positioned, noted the rapporteur of SYRIZA, saying that "the foreign minister has already announced the expansion since August".

And that is the point, during which George Katrougalos underlined that "it will not be the first time that there are significant discrepancies between statements or positions of the Prime Minister and statements or positions of the Ministry of Foreign Affairs". He cited the Foreign Ministry's stance on Turkish provocation as an example, talking about violation of sovereign rights within the Greek continental shelf while, as the SYRIZA MP said, "The Prime Minister with his article on 3 foreign newspapers of 9 September, talked about research in an unbounded area ".

Even more critical, in view of the negotiations, said Mr.. Katrougalos, is that with his repeated statements the Foreign Minister restricts what Greece is negotiating with the Turks in the maritime economic zones, namely, on the continental shelf and the EEZ. "But the prime minister repeatedly refers to the maritime zones as a whole, which are known to include territorial waters, and the coastal zone ", The SYRIZA MP supported and stressed that "these are questions that the Prime Minister should answer and not the Minister of Foreign Affairs, because it is not Mr.. Dendias that deviates from the national position ". George Katrougalos also commented that the Berlin agreement is a similar case, because "we are still in the dark about what was agreed then since the government has not published the minutes nor has it even accurately informed the parties about their content".

Especially in view of the resumption of exploratory contacts, George Katrougalos said that everything must be in the light and "Mr.. Mitsotakis must overcome the irresponsibility he has repeatedly shown in the field of foreign policy ".

"We believe we have no choice but to engage in dialogue, to resolve the only dispute we have with our eastern neighbor. And for this reason we support exploratory contacts, without blackmail though, without the threat of violence. And this process begins undermined, precisely because Mr.. Mitsotakis failed to secure sanctions, in successive European Councils, which would provide a framework of guarantees that Turkey will not recur again, will not return to the aggression we saw in 2020 ", added the SYRIZA rapporteur. Alongside, stressed that even so, the negotiation must move forward, but the government must determine its plan and tactics in exploratory. "We are a patriotic force. We will support a national strategy. If there is. Which obviously should be formed by a council of political leaders, not by guardians, not by protectors ", said Mr.. Katrougalos.