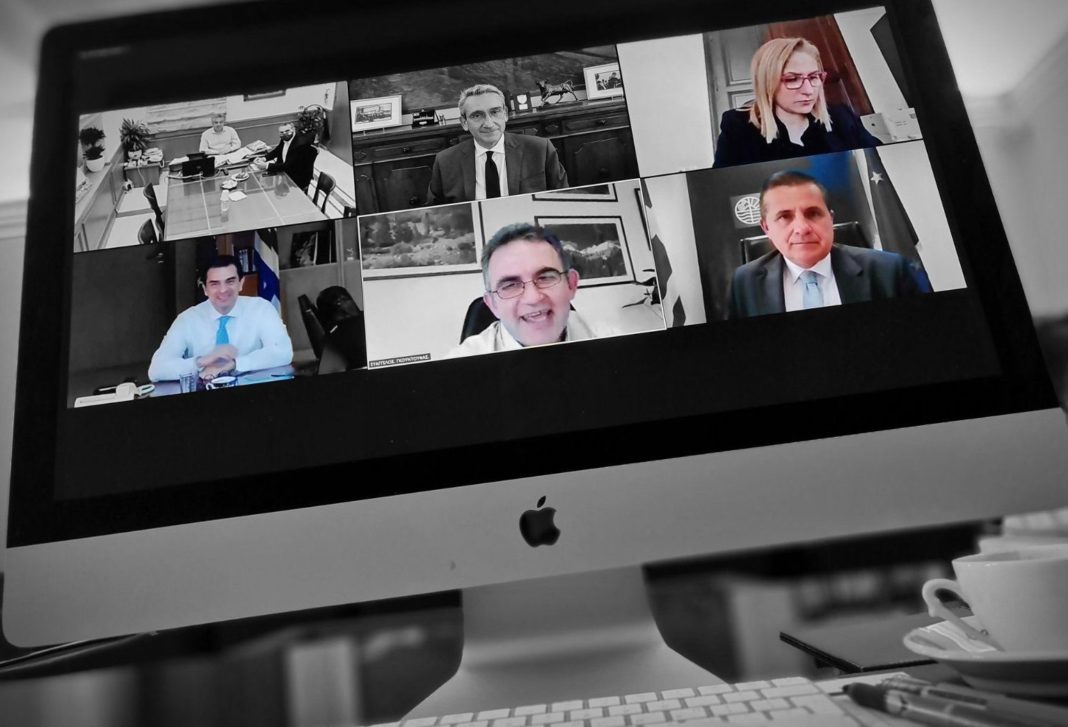 Forest Maps in Aegean Islands: Skrekas to Hatzimarko : "We know the errors of the Forest Maps and we are determined to correct them"

C. Hadjimarkos: "To put an end to paradoxes and injustices. "The problem with forest maps cannot be solved by sending citizens to the courts to defend their property."……….

In a teleconference with the political leadership of the Ministry of Environment & Energy on the crucial issue of forest maps on the islands, participated the Regional N.. Aegean, George Hadjimarkos, yesterday noon.

The Minister of Environment and Energy, Costas Skrekas, took part in the teleconference, the Deputy Minister, George Amyras, Secretary General of the Natural Environment and Water, Dr.. Constantine Aravosis, the Deputy General Director of Forests and Forest Environment Evangelos Goudoufas, the Region of Southern Aegean, George Hadjimarkos, the Regional Governor of Crete, Stavros Arnaoutakis, the Coordinator of the Decentralized Administration of Crete Maria Kozyraki and on behalf of the Coordinator of Decentralized Administration of the Aegean, Artemis Alexiadou.

In his statement, the Regional Governor thanked the political leadership of the Ministry of Environment and Energy for the reflexes and its willingness to cure the outrageous situations that due to the particularity of the island area, caused in the islands the compilation of forest maps based on of the Presidential Decree 32/2016 but also on the basis of the unacceptable document of the Coordinator of the Decentralized Administration of the Aegean with number 277639 / 11-5-2018, equivalent to an unprecedented attack on private property.

He stressed that the beginning of the problem was his Presidential Decree 2016 and that the Regional Authority of the South Aegean was the first to speak then in a very harsh language about the situations that were developing on the islands and were equivalent to confiscation of private property.

Under the pretext of environmental protection, the PD devalues ​​and to a significant extent cancels the main economic activity of the islands, concerning the wider cycle of the tourism product and endangers both the development prospects of the islands of the South Aegean Region, but even the very survival of the inhabitants and the future of their families, transaction security, attracting investment, as well as the fundamental trust that the state should provide to its citizens.

As a typical example he mentioned that only in Patmos, late 2018 with its principles 2019, over 2000 residents faced the risk of losing their property due to their classification as forest and the claim by the State. He stressed that the problem could not be solved by sending citizens to the Courts and called on the political leadership of the Ministry of Environment and Energy to take the courageous decisions required., in order to put an end to the paradoxes and injustices that were created.

The Regional Governor reiterated the proposals for a legislative settlement of the issue, as recently updated by the Regional Council and requested to be included in the new bill.

The political leadership of the Ministry, realizing the problem stated: "We know the mistakes and we are determined to correct them", a statement which satisfied Mr. Hadjimarcou, who invited the Minister of Environment and Energy Costas Skrekas to Rhodes, as soon as the relevant legislation is completed, to make the relevant announcements. The Governor closed his position by saying: "We are waiting for you to discuss all these issues closely, with the hope that you have completed the legislative work and announce yourself the resolution of this issue which gave great anxiety and put in adventure the economic and social life of the islands ".

The proposals of the South Aegean Region for the legislative regulation of the problem of forest maps in the islands are the following:

A)The Dodecanese to be included in the exceptions of para. a subparagraph b of the article 62 of Law. 998/1979, on the non-application of the presumption of State ownership over forests and forest areas.

B) To be revoked and not to apply it with no. 27639/2018 Document Coordinator Decentralized Administration of the Aegean.

D) Clarify by law that the afforestation does not concern final designation acts either, nor certified forest maps but only pending cases.

E)To settle the mass phenomenon that emerged from the forest maps of mixed properties, which can not be transferred.

F) Legislate that in areas of exemptions from the presumption of state ownership of forests and forest areas, of the second paragraph of the article 62 of N.998 / 1979, the transfer or registration of notarial deeds with the object of real estate that have in whole or in part the nature of the extent of paragraphs 5a) or 5b) of the article 3 above the law, in their books transcripts of the relevant land registry or in the relevant sheets of the office Cadastre or Cadastral Office, not even prevented if not submitted an administrative act or final judgment, recognizing that the property or part of the above character is owned by an individual and not the State.