By Giannis Flevaris, Antiperifereiarchi South Aegean
The great Alexandrian, in his poem "Return from Greece" with lyricism and reflection at the same time, praises our sea, the great Mediterranean……

"At least we are sailing in the sea;
waters of Cyprus, Syria, and Egypt,
favorite waters of our homelands ".

Konstantinos Cavafy has always been a living link between Greece and Egypt. His steps in Alexandria and Cairo followed from another point of view, not of culture but of diplomacy, the Foreign Ministers of the two neighboring countries, Nikos Dendias and Sameh Soukri signing after negotiations 13 stops and 15 years, the delimitation of maritime zones and the delineation of an Exclusive Economic Zone (EEZ), Recognizing in practice the United Nations Convention on the Law of the Sea.

Serving a common purpose, Greece and Egypt agreed on Thursday 6 August 2020, the feast of the Savior Christ in the calendar, targeted at a partial sea boundary line, apparently proposing the "torpedoing" of the infamous Turkish-Libyan memorandum with a strong legal transnational agreement based on the Law of the Sea, in the sovereignty and common interest of two of the most ancient and powerful countries of the Mediterranean.

Incredible inventions completely devoid of legal basis such as the "corridor" connecting two non-neighboring countries such as Turkey and Libya, "Disappearing" as if by magic the large Greek islands that are inserted and their given influence, can no longer stand before any International Court of Justice or Institution.

This is true even if the country that invented it, imposed on the collapsing 2019 Tripoli government in return for military support and attempts to enforce Turkish-Libyan memorandum, want to establish an international legal dispute and seek judicial judgment. "Here is Rhodes, here is the leap"… 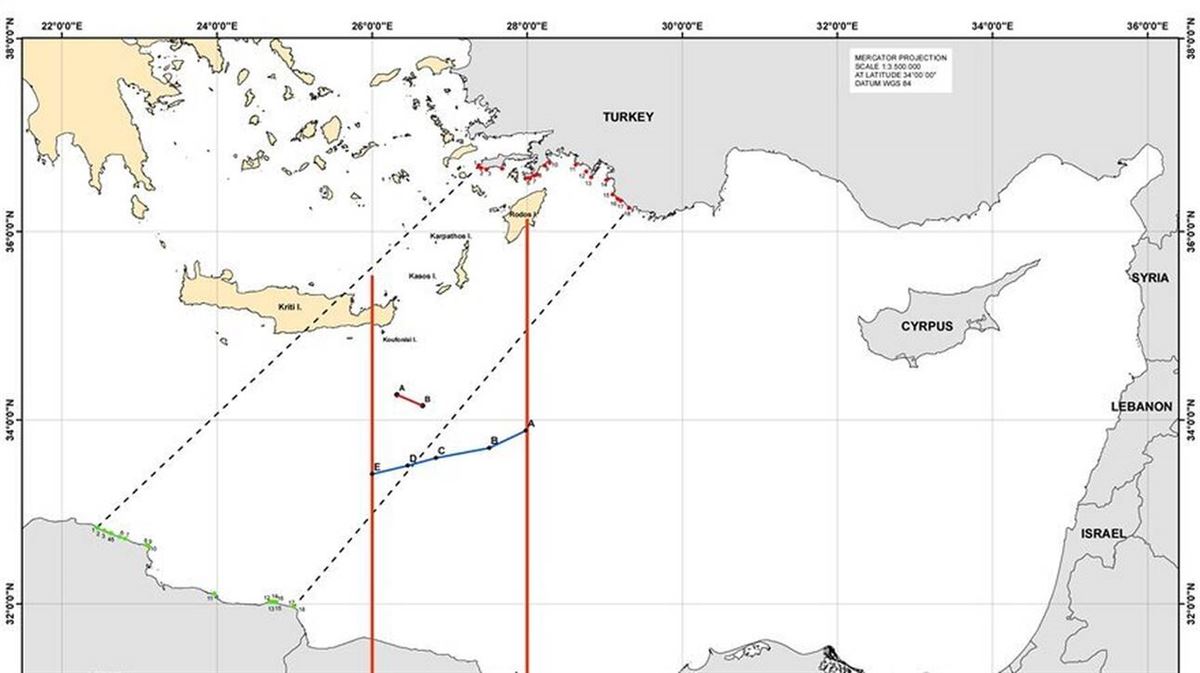 Without all the parameters of the agreement being fully known, It is clear that the influence of the Greek islands in maritime zones is secured and Greece depicts its sovereign rights on the map of the Eastern Mediterranean. The demarcation is partial, that is, it is part of the overall later demarcation between the two countries between the 26th and 28th meridian that intersects Rhodes and deepens the relationship and the strategic alliance between them..

Many international analysts have developed and will develop positions and contradictions on the issue of the Greek-Egyptian maritime demarcation, which is undoubtedly and objectively a historic agreement for Greek diplomacy and foreign policy after a deafeningly long period of abstention and inaction. delimitations of the EEZ.

In addition, the agreement is in the opposite direction to the fans and supporters of Turkey's "appeasement policy", of the always "inappropriate" time of "insufficient" support for national positions with the projection of uncompromising maximalist positions that led for decades to wreck the attempt to draw maritime borders with neighboring countries and allowed the teratogenesis of the Turkish-Libyan memorandum.

In any case, this is Turkey's strategy, which is part of the "blue vatan" plan, even without grounds for legitimacy, except by projecting "tough" geopolitical power, was a catalyst that awakened the third actors in the Mediterranean basin and among them the Greek diplomacy that within eight months achieved demarcations (Italy-Egypt) which for decades he failed to achieve.

The idea of ​​a "blue homeland" is no longer on the right track in contrast to the prospect of declaring a Greek EEZ with Cyprus as the main reason for its postponement was the strategic choice to reach an agreement with Egypt., that Turkey was "besieging" in an attempt to influence it to sign an agreement with the same, offering "land and water" and not with Greece which was finally chosen by the country of the Pharaohs.

Turkey knows that it has been left alone in the region with its unbridled and aggressive demands and alliances are being formed against it., shields and swords that turn the map into a "field" with all that entails;

But no analyst, at least from those who have written to date did not mention the fundamental role of Rhodes, in reaching this partial agreement. The integration of the Dodecanese in the National Trunk after the liberation and the end of World War II (Ratification of the Paris Peace Treaty 10-02-1947) was a great historical event and at the same time a multiplier of power for the Greek state.

It is certain that the geostrategic dynamics of the extension of the Greek borders to the South Aegean and the Eastern Mediterranean was not initially sufficiently assessed by the respective Greek Governments..

But as the realization of its multiple benefits deepens, Greece must strengthen and secure its position in this area of ​​vital interests of its Territory. The Dodecanese. The South Aegean Region is a suitable tool, a powerful institution and organization that can and should be the backbone of any necessary Greek action, investment and island policy.

The springboard of Hellenism for this was and will always be strong, autonomous and great Rhodes. From antiquity until today, Rhodes has been a crossroads of civilizations, Administrative and Financial Center, point of great geopolitical importance and timeless pillar of the Greek nation.

By extension the whole Dodecanese from Agathonisi to Megisti with the great and incalculable offer in the expansion of the maritime borders of Greece which has always been a naval state and now with the application of the provisions of the Law of the Sea will claim as much as possible with legal agreements, utilizing the island complex of Kastellorizo ​​for the sake of which it is still located in Asia Minor and the Eastern Mediterranean.

Rhodes is for many reasons an unsinkable frigate of Greece in the Aegean and the Mediterranean. Reading the names of Greek frigates in service such as Hydra, Σπέτσαι, fisherman, Salamis and others, finds that her name is missing.

In a next naming of newly built warships of this type that Greece must immediately acquire to deal with any external threat, let a name be given that refers to the multifaceted and acritic Dodecanese. There are many options, as many as the islands. Heroic Island of Kasos, Megisti or Frigata Rhodes.

Presence of students, of the teachers and the Principal of the Primary school of Ano Mera, the Agiasmos for the new school year took place 2020-2021.... observing all ...
Read more
Coronavirus - coronavirus

Face masks in schools: The production of masks for students is stopped, by decision of KEDE!!

By decision of the Central Union of Greek Municipalities (KEDE) the production of masks for schools is stopped immediately, after the phenomenon with the huge masks ...
Read more
View more