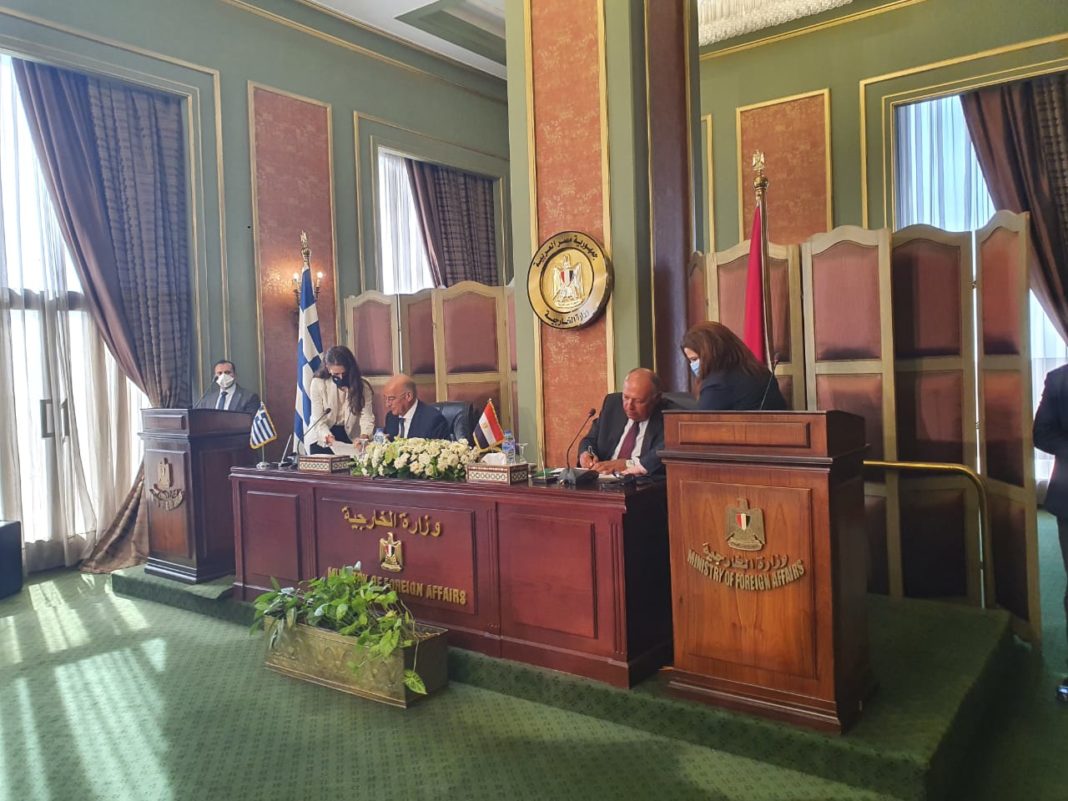 Greece-Egypt EEZ deal: The agreement between Greece and Egypt for partial demarcation of maritime zones was signed [Video + Map]

Greece and Egypt agree and sign definitively on -partial- delimitation of their maritime zones during the secret visit they made today, Thursday 6 August, in Cairo Nikos Dendias……

It is noted that the Greek Minister of Foreign Affairs Nikos Dendias went to Egypt today, as part of an official visit, to add the final touches to the agreement on the -partial- delimitation of the maritime zones between Egypt and Greece. 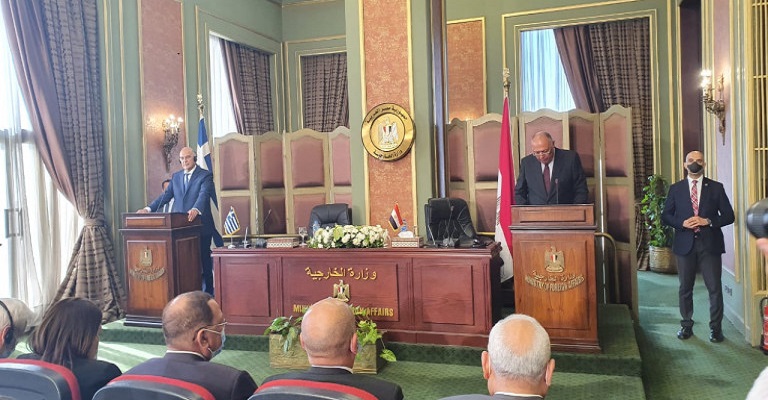 Egyptian Foreign Minister receives Nikos Dendias in Cairo to discuss ways to strengthen bilateral relations and co-ordinate on issues of common interest, in preparation for the signing of an agreement. This visit is part of the Egyptian-Greek consultations to discuss the situation in the region.. The last visit of the Greek Foreign Minister to Cairo took place on 18 June.

Although the talks took place under conditions of extreme secrecy, according to the same source, the two sides resulted in a partial demarcation of their maritime zones (that is, the continental shelf and the Exclusive Economic Zone) with the 28th meridian limit being the key point for finalizing the agreement.

The agreement is signed by the Greek Foreign Minister, Nikos Dendias, and his Egyptian counterpart, Sameh Sukri.

As the representative of the Egyptian Foreign Minister typically states in a post on Twitter: "Part of the signing ceremony of an agreement for the establishment of an exclusive economic zone between the Arab Republic of Egypt and the Republic of Greece", while he also posted relevant photos.

Part of the signing ceremony for an agreement on the designation of an exclusive economic zone between the Arab Republic of Egypt and the Republic of Greece pic.twitter.com/RGd8DdeMtu

The press conference between Shukry and his Greek counterpart started after the signing of an agreement on the designation of the exclusive economic zone between Egypt and Egypt. pic.twitter.com/8YtufeOPR3

Part of the signing ceremony for an agreement on the designation of an exclusive economic zone between the Arab Republic of Egypt and the Republic of Greece. pic.twitter.com/wcTURCSz2J

In a joint press conference that followed the meeting, Sameh Sukri, pointed out that the two sides signed an agreement on the definition of Economic Zones between Greece and Egypt and all its provisions are compatible with international law.

Dendias: With Egypt we will face all the challenges

On the other hand, the Greek Minister of Foreign Affairs, Nikos Dendias, He stressed that "there is full and continuous communication between the two countries" at ministerial level.

as noted, agreement signed late last year between Turkey and the Tripoli government to define maritime borders "is not legal".

Mr.. Dendias underlined, including, "We will meet all challenges in the region in cooperation with Egypt".

This is the agreement with Egypt

According to the Greek Ministry of Foreign Affairs, This agreement is part of a broader settlement strategy, building alliances with third parties in a way that promotes national interests, on the basis of respect for International Law.

It is a balanced agreement.

It is fully in line with the law of the sea as it has been applied in practice and in case law. Our firm position that the islands have sovereign rights on the continental shelf and the EEZ is solemnly confirmed.

The influence of our islands in sea zones is secured.

In the negotiations for the agreement, The main criteria were the provisions of the Law of the Sea and especially the right of the islands to sea zones.

The message in every direction is that Greece does not make illegal agreements, nor does it force other countries into lioness agreements. Negotiates and delimits under the law of the sea and the correctness of our policy against illegal actions, such as the Turkish-Libyan memorandum, is proved by the fact that Cairo bordered with Greece, despite Turkey's futile efforts to bid by offering Egypt a larger EEZ.

Confirms the invalidity of the Turkish-Libyan Memorandum

It was confirmed that the observance of the law of the sea is a sufficient and necessary condition for the delimitation of maritime zones of the countries in the region..

We hope that Turkey and Libya will understand and harmonize with this reality so that all the outstanding issues can be resolved..

End, Relations with the world's largest Arab country have been further deepened and strengthened, Egypt.

The map with the EEZ

In this context, Diplomatic sources released the map with the Athens-Cairo agreement. 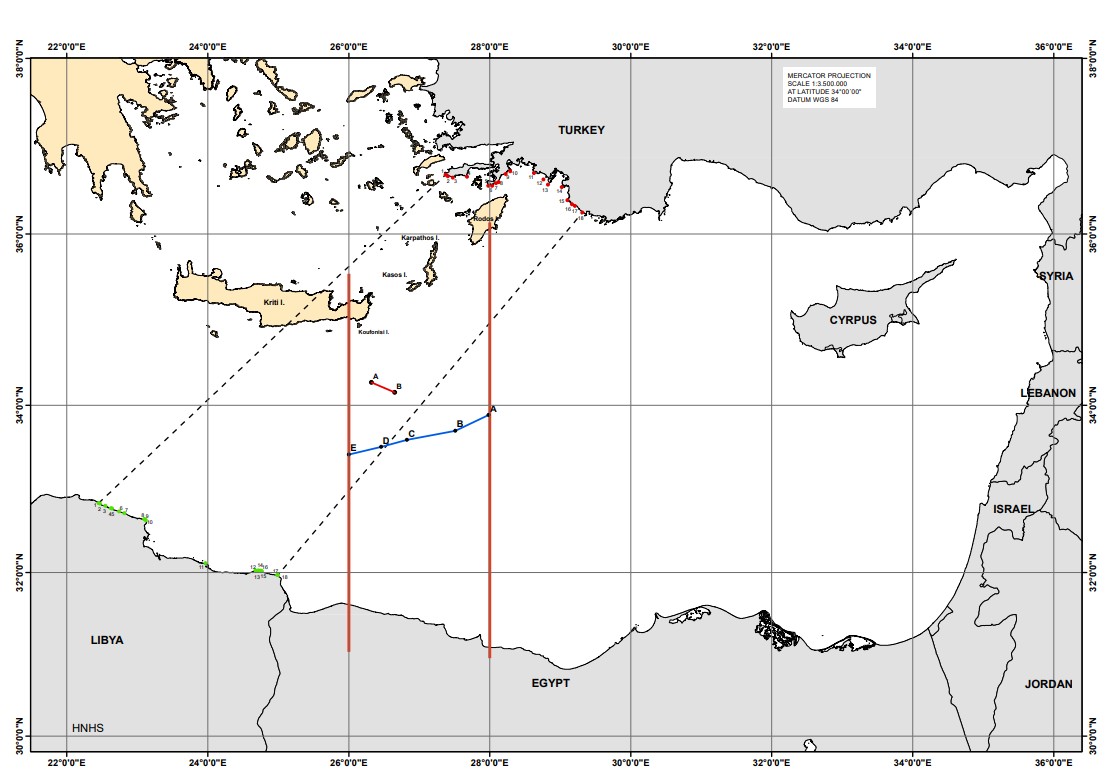 The reason was the decrease in international tourists by 65%, due to border closures and various other travel restrictions. Η μείωση του αριθμού...
Read more
Greece

Overthrow in the new KOK!! "Traps" KOK for parents!! Seat until 12 and after 16 children on a motorbike!!..... Σύμφωνα με τον ΚΟΚ...
Read more
Breaking News

The Council of State rejected as unfounded the application of the Panhellenic Association of Shops and Consumers of Catering and Entertainment, με την οποία ζητούσε να ακυρωθεί...........
Read more
View more