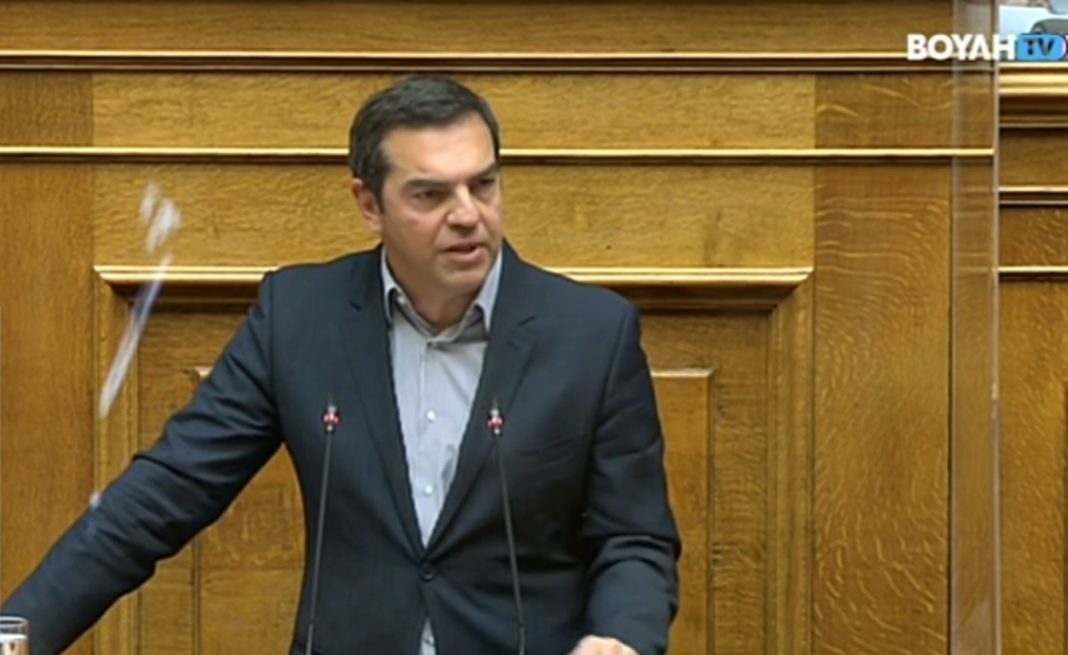 By attacking the Prime Minister, Kyrako Mitsotaki, SYRIZA president begins his speech in Parliament on his stance on national issues when he was in opposition, Alexis Tsipras…………

"We welcome the expansion of the territorial waters of Greece in the Ionian. And of course we welcome you too, Mr. Mitsotakis, to another strategic choice of the SYRIZA government. After Prespes, now our territorial waters in the Ionian ", said the president of SYRIZA and reminded that "When our government announced this position, in October 2018, you insulted and undermined it in public. Both you and your party, who was then in opposition. At least you did not declare a great patriotic war and why’ this, as you did for Prespa ".

The official opposition leader blamed the prime minister for his unreliability, explaining: "Now, Nevertheless, you yourself who fought the position for seasickness in the Aegean, you have no problem applauding yourself and each other. And so it turns out that your unreliability in foreign policy matters was not a mere coincidence. It is your second nature. Because on two critical issues of our foreign policy, which we opened with a sense of national responsibility, you, while you knew that we opened them correctly and that their completion was a national benefit, you fought them both with hypocrisy while you were in opposition. And when you became a government you made a turn in both 180 degrees ".

Mr.. Tsipras quoted statements by Mr.. George Koumoutsakos and Mr.. Claus Kikilia, who were responsible heads of sectors of ND, as well as Mrs.. Doras Bakoyannis, of Mr. Adonis Georgiadis and Mr.. Angelos Syrigos, who had opposed the expansion of the country's territorial waters only in the Ionian, when he was in opposition.

Dodecanese Islands: 7 of March 2021 – The anniversary of the Union of the Dodecanese to Greece is for all occasion pride and reflection

Coronavirus Vaccination: Vaccination in Pharmacies and in 1 dose!! The new vaccine is expected in Greece in April, drastically changes the data!!

Mykonos - Φ. Vigliaris: On foot the D.E.Y.A.. Mykonos for the cleaning and maintenance of the pumping station of Alefkandra

Coronavirus Vaccination: Vaccination in Pharmacies and in 1 dose!! The new vaccine is expected in Greece in April, drastically changes the data!!

Dodecanese Islands: 7 of March 2021 – The anniversary of the Union of the Dodecanese to Greece is for all occasion pride and reflection

Mykonos - Φ. Vigliaris: On foot the D.E.Y.A.. Mykonos for the cleaning and maintenance of the pumping station of Alefkandra