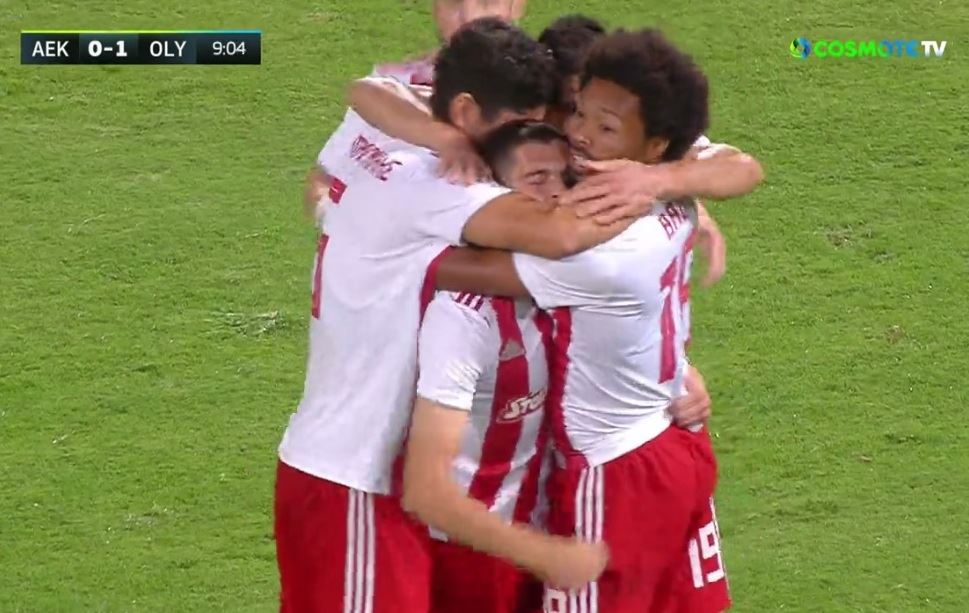 Olympiacos won the Greek Cup after winning 1-0 AEK at the Panthessaliko Stadium with a goal by Lazar Radzelovic.

Olympiacos defeated AEK with 1-0 in the Greek Cup final and made the double in Greece. Rangelovic scored the only goal of the match. Piraeus also lost a penalty with El Arabi. Fourth consecutive defeat for the Union in the final of the institution………

The Piraeus, celebrated the 28th Cup of their history, while they also made the 18th double after a few months ago the Martins players had become Greek Champions. The association, on the other, lost the fourth consecutive Cup final after three defeats by PAOK, now Dikefalos is bent by the excellent Olympiakos.

Pedro Martins did not make any surprises in the end, based on the tests he did last night at Panthessaliko. Rangelovic was chosen instead of Fortunis and as you will read below, the Serb justified him in 100%. The reason Ranjelovic started, had to do with the help Martins wanted to give to Bruno who had a difficult task against Livagia.

In the 4-2-3-1 chosen by Martins, Tzolakis sat under the beams, Bruno on the right and Torosidis on the left in defense, Cisse and Ba duo in the center of the rear, Bouchalakis and Kamara in the midfield, Ranjelovic and Masouras on the two "wings" of the attack and Valbouena behind the promoted El Arabi.

AEK lined up with 4-3-3, with Tsintotas at the hearth, fours in their defense Bakakis, Harrow, Czigrinski and Lopes, Simoes and Kristisic in the midfield, in front of them is Mandalos, to the right of the attack is Verde, on the left Livagia and at the top of the attack Oliveira.

So Martins's inspiration turned out to be "one hundred pounds". Rangelovic was the main character in the first half with the energy he brought out on the grass. An action that referred to a rocket! It wasn't just the goal he scored in the 9 ', after a great vertical pass by Kamaras. It was his total presence, as he helped Bruno a lot in the blocking part. Most of all, however, he stopped coughing at AEK at the time when the score opened, because a few seconds earlier in an inconvenience in the defense of Olympiacos after a foul by Livagia and an unstable repulse by Tzolakis, Ba saved Oliveira's place above the line. AEK that finished the half with 61% occupation, saw Olympiakos threatening for 0-2 with El Arabi in 35 '. The "red and whites" with the protagonist Rantzelovic, with Valbouena and Kamaras picking up pace after 30 'and with Bruno standing decently against Livagia, could turn the first 45 minutes into a nightmare for AEK. The "Union" was talkative, without seriously threatening Tzolakis, except for a direct corner by Verde and an attempt by Livagia after a poor assessment in a chase that Ba tried to make with his head in the 33 '. The final 0-1 of the first half essentially reflected the image of the match, as AEK did have more finals and possession, but Olympiakos more glaring opportunities and the essence of his game.

LOST PENALTY, UNFAIR FROM THE SCORE

And the second half was one of the same. With AEK having the "talkative" possession, but Olympiakos the chances to consolidate his victory and make his life calmer until the 96th minute. He had the missed opportunity with Masoura in the 49th minute in a new quarter of what is not lost and the missed penalty of El Arabi in the 57th minute.. AEK had to show only static phases and nothing more. Even some suspicions of opportunities that were attempted with a shot by Livagia or Simoes, Tzolakis was where he should be. Olympiakos won the Cup very well (SS. among others, a goal with Kafou in the 85th minute was canceled for offside at the beginning of the phase, El Arabi) and in the… sum of the match, one could say that if a team is wronged by the score, this is none other than Olympiakos.

All the measures that will be valid from Monday in Mykonos, which will be at Level 2 Surveillance!! Nέα μέτρα μπαίνουν ξανά στη ζωή μας...
Read more
Coronavirus - coronavirus

Clarifications on how Focus will work, Bars and Nightclubs, during the briefing on the course of the coronavirus, the Deputy Minister of Civil Protection gave ...
Read more
View more