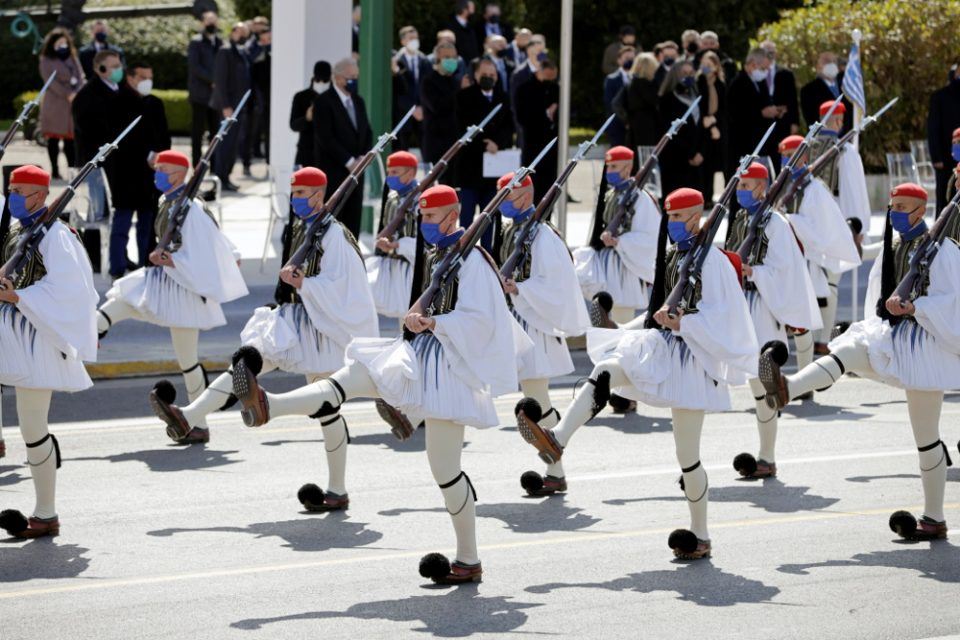 With the majestic military parade in which France participated for the first time with aircraft of their Air Force, the United Kingdom and the United States on the occasion of completion 200 years since its revolution 1821, the celebrations for the anniversary of the national polygenesis peaked……….. 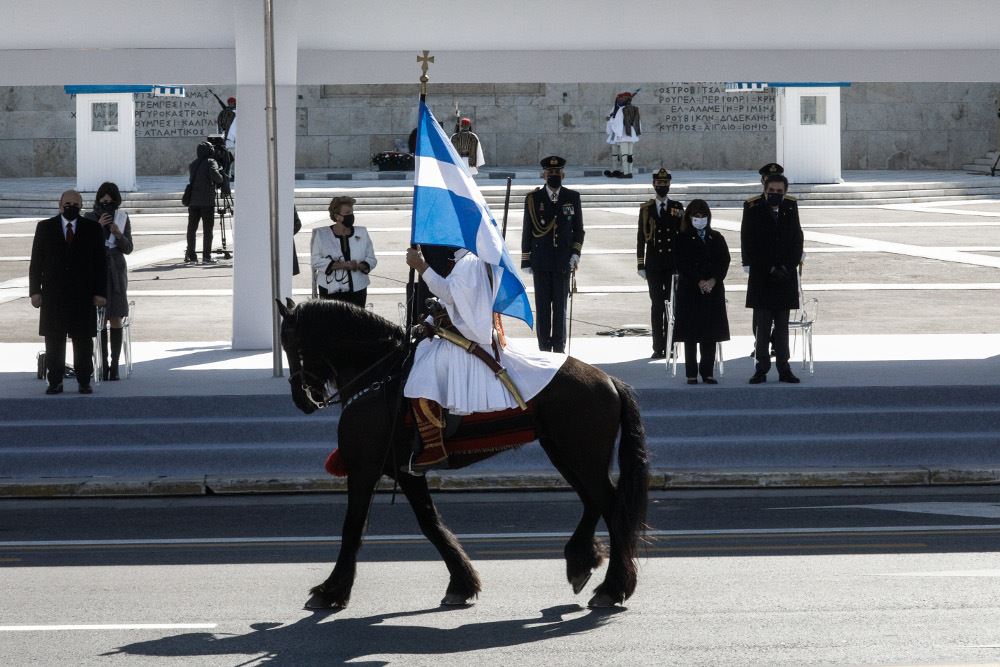 The parade of the motorized and infantry sections of the Armed Forces and the Security Forces was opened by a cavalry section with the traditional costumes of different historical periods (Revolution 1821, Balkan Wars, World War I., Asia Minor Campaign, World War I.) to honor them 200 years of his Revolution 1821.

The boys-boys and girls followed – with traditional costumes from all over the territory holding Greek flags, whose passage drew the applause of the state political and military leadership and foreign high-ranking guests. who attended the parade.

Then, for the first time, all the banners and flags of the Revolution paraded. All of them write Freedom or Death while Mani writes Victory or Death which were transformed from relics of history into part of history as characteristically mentioned during the television broadcast of the parade, from ERT. The flags of the Holy Lavra, of the Friendly Society, of the Holy Corps, of Psara, of Hydra of Spetses, Mainland Greece, Corfu, Crete. Makedonomachon, Epirus and the islands.

The baton was taken by a section of men in traditional sailor uniforms.

The motorized phalanx was opened by the Department of Vehicles and Motorcycles of the Armed Forces and the Hellenic Police. The motorized Infantry followed, a motorized Support Battalion.

Among others, the presence of Leopard tanks was imposing (Leo -2 WHOLE). The armor completes this year 90 years of presence in the Greek Army-constituting the evolution of the cavalry.

Aircraft and helicopters of all types of the three branches of the Armed Forces and the Security Forces passed over the area of ​​the parade in perfect formations..

F-16 fighter jets flew in fours, M-2000/5 and F-4, together with RAFALE of the French Air Force, US Air Force F-16s and 2 aircraft refueling aircraft (VOYAGER of the United Kingdom Air Force and KC-135 of the United States Air Force).

The infantry division was led by part of the presidential guard , the Evzoni. The infantry war flags followed.

The baton was taken by infantry divisions of the productive schools of the three branches of the Armed Forces (SS. the Icarus School completes this year 90 years since its establishment) as well as the Security Forces.

A special impression as every year was caused by the passage of the departments of the Special Operations units .

After the end of the parade, the President of the Republic Katerina Sakellaropoulou congratulated the Commander-in-Chief of the military school of Evelpidon, Lieutenant General Georgios Kostidis, for the even and perfect parade..

Previously the President of the Republic, and the high guests who came to our country for the 200th anniversary of national polygenesis laid a wreath at the monument of the Unknown Soldier, The National Anthems were rejected and the honorary procession of Evzoni was inspected.

Message from the pilot of the "Zeus" aircraft: In the white clouds and above the blue seas, we spread the blue and white and make it a shield for every corner of our homeland

"From the invincible Greek skies, The pilots of the Air Force send a message of pride and confidence. In the white clouds and above the blue seas, we spread the blue and white and make it a shield for every corner of our place ". This was emphasized in a message by the pilot of the air demonstration team of an individual aircraft F-16 "Zeus" of the Air Force, Commander Dimitris Volakakis.

"We honor them 200 years 1821. Those who liberated the homeland and those, post, they raised her in everything: In the territory, in democracy and prosperity, "the spokesman said.

"Hold me", he continued, "Strongly the baton of national debt. Guardians of Independence and Peace ".

"Look up and hearts! Greek wings are watching there. To travel us together in the third century of our free life. Happy birthday homeland! Happy birthday Greeks, everywhere in the world "concludes the message of the pilot of the aircraft" Zeus ".