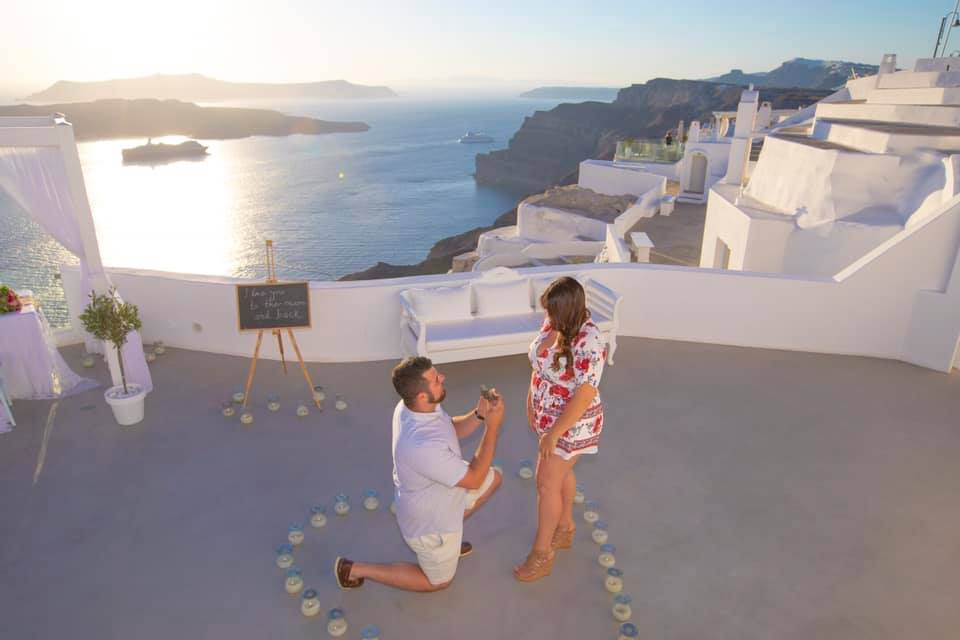 H Santorini has become the ultimate destination for premarital photography

An elaborate wedding business tourism multibillion dollar with spouses from the Asian countries come to be photographed before marriage……
For couples from Asia, Santorini has become the ultimate destination for premarital photography. Chinese, mainly, arriving by the hundreds on the island to be photographed and then returning home for the traditional wedding. The fact that a luxury hotel Santorini is the setting for a popular romantic comedy in China adds to the fascination with the Greek island for those who are going to marry.

Santorini is famous in China's 1,2 billion. residents with the growing economy and more and more tourists who want to experience the world, unlike their parents who did not travel outside China.

Young couples who have money and visit the world want to immortalize their cosmopolitanism to show the relatives, friends and guests at their wedding.

According to The New York Times, the prenuptial photographs are a multi-billion dollar in the era of Instagram, especially for couples from Asia.

Many couples who are planning a traditional wedding in China before traveling for professional photographing the Eiffel Tower in Paris, Big Ben in London, English countryside _ which became popular photographic destination because of Downton Abbey series, according to the China Morning Post.

Latest fashion in premarital photography in China is New Zealand and Antarctica. But the romantic photography Santorini sunset continue to hold the lead among spouses.

The photographers come from China or are Greeks who are trying to profit from the lucrative market for this post on their websites pictures of Chinese couples in Santorini. The island authorities are seeking Chinese investment and estimate the money they bring Chinese tourists who have extended the tourist season deep into the autumn, when European and American tourists have left a long time ago. The Chinese love to be photographed while much sun do not like.

Foreign photographers along with workshops on makeup and styling installed in Santorini for months. Local actors island denounce the American newspaper that many of them do not pay taxes.

A photo shoot can cost tens of thousands of euros _ but this amount is assessed an image simultaneously symbolizes both true love and social advancement. The photograph is now more important than the wedding.

As for couples who do not have the means to travel to Santorini photographed, photographic studio in Shanghai which feature scenes from the Greek island.

The craze began is said by Taiwan and then spread to China and other Asian countries. Today, is such crowding by couples who want to be photographed in the most popular spots on the island _ as a blue dome in Oia _ that photographers who work on the island considering to put a time limit for each photographing these points.

The Ministry of Development and Investment, issued a New Circular clarifying the terms and conditions of operation of catering stores. There is a report, including,...
Read more
Previous article 3th with the National Children Naoumenko, International Athletics Meeting in Greece - Cypriot National Teams
Next article Greece will have to modernize its air space and its systems in order to reduce delays
Share
Facebook
Twitter
Pinterest
WhatsApp
Linkedin
ReddIt
Viber
VK
Tumblr
Telegram
Mix
Digg
LINE
Email
Print

3 new confirmed cases of coronavirus infections and 2 New deaths have been recorded in the last 24 hours in our country , bringing the total cases to 2.906 ...
Read more
View more