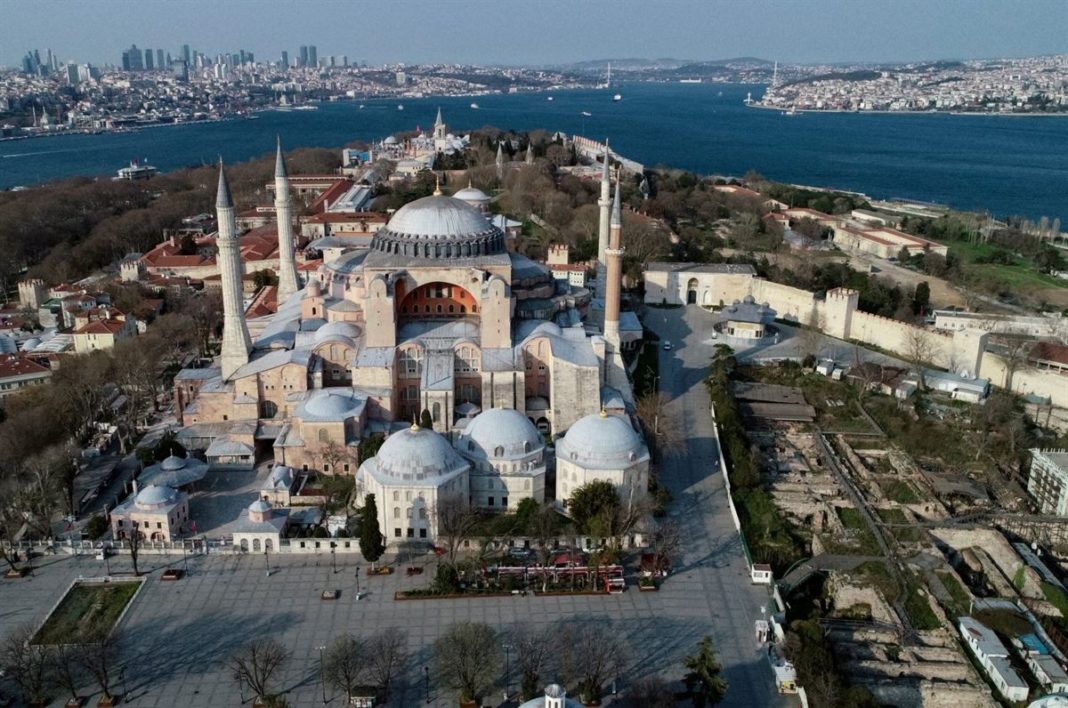 Hagia Sophia: The sanctions plan that Greece will request – "Small basket" by Europeans

Diplomatic counterattack against Turkey is being prepared – Only France will take a hard line against the Turks……..

European sanctions that will hit Turkey's "Achilles' heel", that is, its economy, Greek government seeks first response to decision to convert Hagia Sophia into a mosque. According to Open TV, a diplomatic counterattack is being prepared, starting with the meeting of the EU Foreign Affairs Council., and first stop at the upcoming Summit.

At the same time, Greek diplomacy does not overlook the position that Ankara wants to send through this extreme challenge and the further course of Greek-Turkish relations.. That is why Foreign Minister Nikos Dendias is coming to next week's appointments with a clear message to all European Institutions., that "Athens will respond harshly".

Meanwhile, the proposal of the Deputy Minister of Immigration Policy, George Koumoutsakos, for the economic weapons that can come out of the "quiver" of sanctions against Turkey makes sense.. "Europe has to put economic pressure on us. I personally tell you in the context of the debate, We could say that the passage of Turkish trucks from Turkey could be stopped, to Europe, via Greece, at least until 24 July, "he said in an interview.

For his part, Recep Tayyip Erdogan, speaking to a Turkish magazine, defended his decision and insisted that it was an internal Turkish affair.. In addition, Turkish Nobel laureate Orhan Pamuk opposes Erdogan's decision, which speaks of millions of secularists who oppose Erdogan's decisions. In addition, the vice president of the official opposition accuses Erdogan of "disrespect" to Kemal Ataturk.

The conversion of Hagia Sophia into a mosque provoked the intervention of Pope Francis. "It simply came to my notice then. He is going to Istanbul and Hagia Sophia and I am very sad, "he said. In Athens, the Archbishop of Athens and All Greece, Ieronymos, in a resounding speech, emphasizes that "the instrumentalization of religion characterizes the one who attempts it".

At the same time, at the European level, the reactions are escalating. Italian Northern League leader Matteo Salvini scolds Turkish president. "Turkey, which some wanted to integrate into Europe, is turning Hagia Sophia into a mosque. It is confirmed that the pre-eminence of a certain Islam is incompatible with the values ​​of Democracy, freedom and tolerance of the West ", he said.

SYRIZA also criticizes through the party's spokesperson Alexis Haritsis. "THE “diplomacy of information and the given ally” of Mr. Mitsotaki has cost a lot in the country. "Now that he remembered the sanctions, it is too late," he said.

"Small basket" for sanctions on Turkey by Europeans

"Small basket" for sanctions in Turkey, we should expect from the EU Council of Foreign Ministers, to be held tomorrow Monday, According to Maria Psara, the correspondent of Open TV and the Nation in Brussels. The only country that is expected to be on the side of Greece and Cyprus is France, as it will hold a "hard" line, with regard to sanctions against Turkey. On the contrary, Germany will try as a presidential country, of the EU Council. to play the role of balancer. That is, to insist again on opening the dialogue, of EU communication with Turkey.

Lack of financial weapons and fear of immigration – refugee, there is a very serious possibility that the EU. to follow Turkey's policy of appeasement. All that remains to be seen, according to Maria Psara is whether there will be climate change after the issue with Hagia Sophia. That is, if some countries change tactics and support Greece, Cyprus and France.

180 New confirmed cases of coronavirus cases and five new deaths were recorded in the last 24 hours in our country, bringing the total cases to 13.420 and...
Read more
Breaking News

On the occasion of the opening of schools on Monday 14 September 2020, issued today (13.09.2020) new Ministerial Decision, defining the cases, in which it is provided ...
Read more
View more