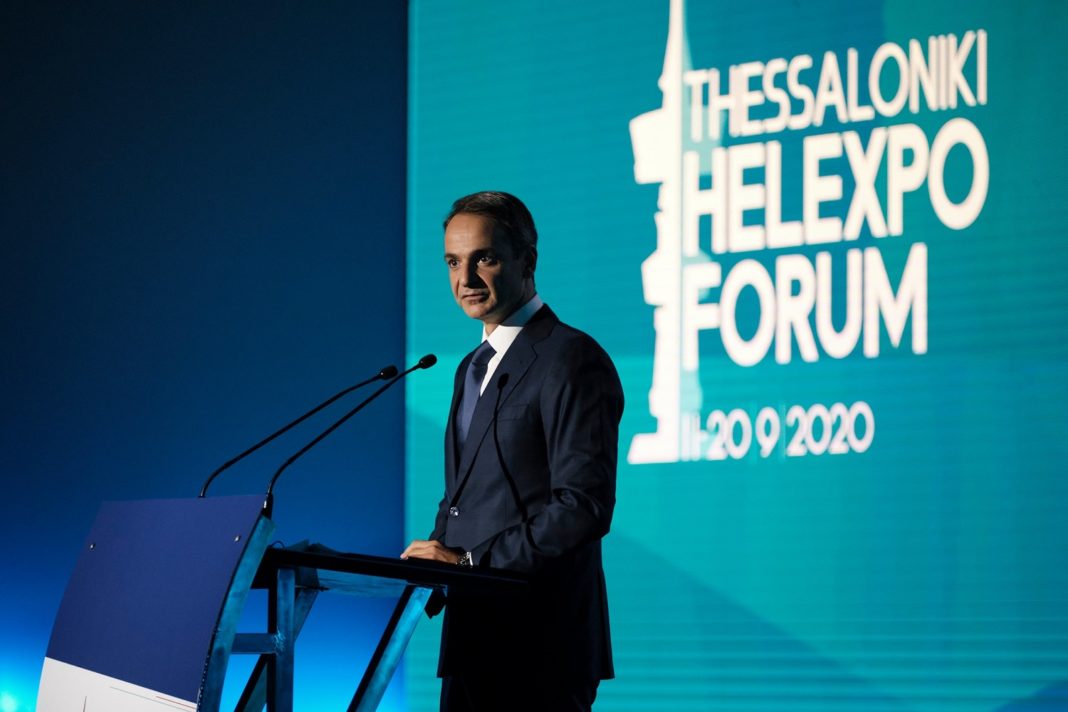 Government announcements to address the effects of the pandemic
The Prime Minister from the Thessaloniki Helexpo Forum made important announcements in the field of Economy and Defense. Message to Turkey: "The end of the challenges can become the preface of the discussions".…….

From the podium of the Thessaloniki Helexpo Forum that this year "replaces" the TIF, because of coronavirus, Kyriakos Mitsotakis began his speech in Vellideio and spoke about the steady steps that Greece will take in the unstable environment of the coming autumn. "A national self-confidence rises next to anxiety and insecurity", said Prime Minister.

The 6 interventions for the Armed Forces

One move, which enhances our deterrent power. And which, in combination with the modernized F-16 and the rest of the Greek wings, will not be ignored by anyone.

– Secondly: The Navy initiates the procedures for joining its fleet 4 of New Multi-Role Frigates. Alongside, modernizes and upgrades 4 MEKO frigates, already available.

The new boats will be framed, also, from 4 ROMEO naval helicopters. The most combative in the world. ΄Έτσι, our seas are shielded more effectively than ever.

– Thirdly: The arsenal of all three Branches is fully enriched.
And they are immediately secured: New anti-tank weapons for the Army. New heavy-duty torpedoes for the Navy, new guided missiles for our Air Force.

The dogma in this area is: "Every weapon system works as long as it lives, as it should and where it is needed ".

– Fourth: The capacity of our Armed Forces is renewed with the recruitment 15.000 men and women over a 5-year horizon.

Simultaneously, the whole framework of military service and training is re-evaluated. So that our young people can get it for free - I emphasize- free certified skills. In other words, professional supplies for their political life, while serving in the military.

– Fifth: We are activating our Defense Industry. Already, at the Shipyards of Elefsina, US funds are investing in their modernization.

A strategic investor will soon enter the Scaramanga shipyards, maintaining jobs. The tender process has been completed, The completion of the privatization of ELVO is imminent in the near future.

And the ODA is reorganized, to be turned into an aircraft maintenance center for the wider area.

– Sixth: The Armed Forces are enhancing their digital function. But also their protection from hybrid type cyber attacks.

At each of their business levels, modern systems are installed that ensure a secure flow of information and therefore timely mobilization..

These are six brave choices. Six bold answers not only to the needs of the times. But also in the challenges of History.

As you can see, they move on many levels: Not only the strengthening of weapons systems but also the increase of human resources, the modernization of the structures of the Armed Forces, but also the legal framework for defense procurement.

In other words, These initiatives formulate a robust program that will become a national shield. Simultaneously, Nevertheless, are also movements with a development sign. As they mobilize our national industry. But also with a social stamp. As they provide thousands of jobs.

The prime minister from the TIF announced 12 meters of height 6,8 billion. Euros to strengthen the Economy

The pandemic, Nevertheless, it affects not only public health but also the national economy. And on this front, the government responded with a grid of measures that has been in place since the spring. And that is constantly enriched, depending on the needs of the moment.

Mr.. Mitsotakis spoke about 12 Confidence Steps That Shape A Roadmap To 2021, namely:

"This is a policy that combines tax relief for paid work, with support for employer action ", calling them "both pillars for the creation of national wealth and antidotes to pathogens".

step One: They are reduced by 3 points (from 39,7% in 36,7%) the insurance contributions of employers and employees of the private sector for 2021. Employee, namely, with a net salary 1.016 euros will have an annual benefit 158 euro.

And the cost of the place for the business will be reduced by 301 euro. It is enlarged, so, household income.

And, at the same time, paves the way for new hires from companies whose liquidity will have increased.

step Two: The Solidarity Contribution for private sector employees is abolished, professionals and farmers. The measure will initially be valid for one year, the 2021.

They are relieved, so, based on the source of income, all the self-employed and employees in the private sector: so an employee with a monthly salary 2000 euros will have an annual tax relief 361 euro.

step Three: An innovative Grant Program is immediately established 100.000 new jobs: The state will cover on 6 months the contributions, employee and employer, for each new employee.

Regardless of his salary and specialty. Provided only that the jobs in the company will not be reduced. If, indeed, hired long-term unemployed, his position will be subsidized with still 200 month euro.

The setting translates, I give an illustrative example, in profit 2.821 euros per semester, for both sides, for a new salary 700 euro. Or, respectively, about 4.000 euros for salary 1.200 euro.

It is an opportunity for the unemployed. But also a boost to business. He came, at last, the time from unemployment subsidy to switch to job boost.

Step four: The "COOPERATION" program is strengthened and expanded until its end 2020. They will continue, so, to supplement the wages of those who are forced to work part-time in the sectors affected by the pandemic. Without losing insurance rights on their nominal salary.

It is expanding, also, the possibility of temporarily suspending contracts in the catering sectors, tourism, of Transportation, of sports and culture. And to them are added, now, tour guides and artists.

Step five: The 3rd cycle of favorable financing for businesses through the "Refundable Advance" opens immediately. The height of the third circle will be 1,5 billion.

And from now on, will include sole proprietorships without cash registers from the catering sector, tourism, of Transportation, culture and sports.

But also the non-profit companies that are charged with VAT. While we are launching the 4th cycle for November, with an initial height of 600 from. euro.

Step six: Following our intervention in research and innovation spending, the measure of over-depreciation in height is introduced 200% and for digital and green fixed capital investments for three years, 2021-2023.

An indirect liquidity injection that reduces corporate tax. And it motivates investment in equipment that improves overall productivity, digitizes processes and reduces the environmental footprint of businesses.

Step seven: In October, about one million retirees are paid retroactive amounts 1,4 billion. euro, of the main pensions for the 11 months 2015-2016.

While until December more will be credited 460 millions to hundreds of thousands of beneficiaries, due to the new way of calculating pensions.

This is an institutional compliance of the State with court decisions. But also for a political choice of a social nature. Because labor veterans help, at this critical juncture, the whole family.

Step eight: ENFIA is removed immediately 26 our smaller islands, which have been particularly tested in recent months.

Thousands of inhabitants, from Kastelorizo ​​to Ai-Stratis and from Othonos to Gavdos, are exempted, on a permanent basis - and from 2020- from the obligation of this tax.

Step nine: For those employed in professional sectors that the coronavirus has hit, it is postponed until April 2021, the payment of any debt that had been suspended in the first phase of the pandemic. Tax and insurance.

And, of course, all previous facilities are still valid, such as those of rent.

Step ten: The reduced VAT rate on transport is extended for six months, coffee, in non-alcoholic beverages, in cinemas and tourist services.

Branches that continue to be affected by the pandemic, continue and are firmly supported by the state.

Step eleven: Following the actions of the Government, in cooperation with the banking system the first home of vulnerable households is not in danger of being auctioned until the end of 2020.

And since January 2021, our weakest fellow citizens will have the opportunity to join the new debt settlement code and second chance that will have been voted by then.

And step twelve: All unemployment benefits that have just expired are extended for another two months. And it decreases to 50 instead of 100, the number of stamps required for the granting of this aid.

They are included, so, to this extent seasonal workers who saw a reduction in their wages from the pandemic.