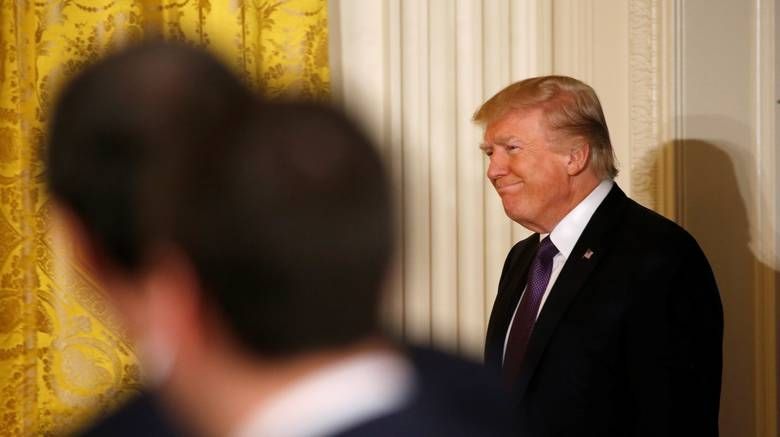 The great political change Trump – The joy of Europeans

the once classified NATO, It has changed radically, and so are the government's team moves.

The intense election campaign presidential candidate Trump had spoken disparagingly of the North Atlantic, while at the same time, expressed allowance for building a closer relationship with Russia. Beijing had also been targeted in, the Trump accusing China "Championship" manipulation of the national currency's.

During a press conference held in white House, but in an interview yesterday in newspaper, the Trump presented with diametrically opposed views, compared with the pre-election promises.

He said that relations between the US and Russia are deteriorating, while relations between Washington and Beijing are improving. Alongside, He changed his attitude towards NATO, stating that the North Atlantic Treaty is adapted to the evolving global nature of threats. «I'd say that is outdated. There are now obsolete», he said the Trump during a press conference with the participation of NATO Secretary General Jens Stoltenberg in the East Wing of the White House. 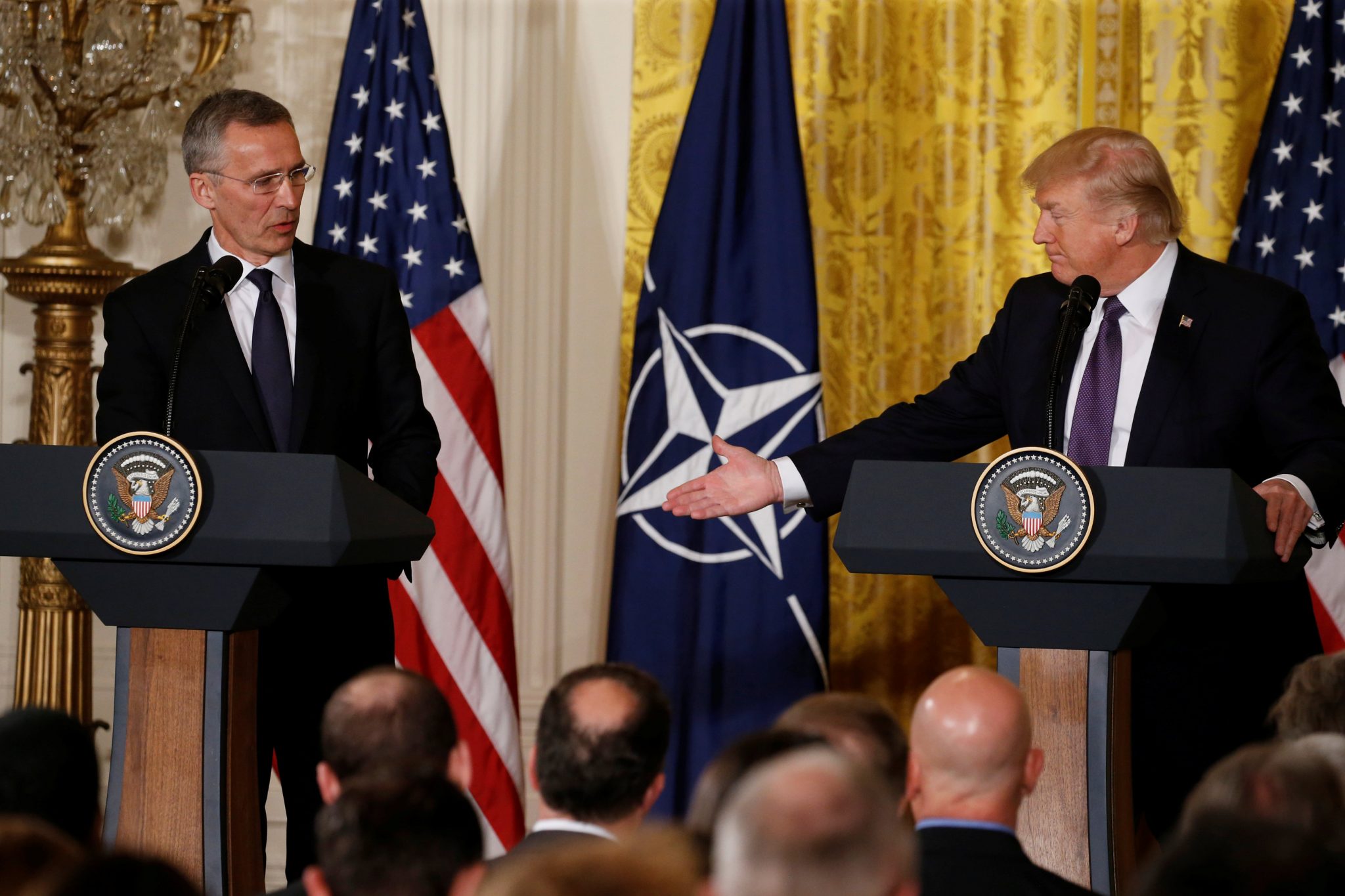 Diplomatic, as mentioned by the ANA-MPA, the change of attitude of the US government in the eyes of NATO and towards relations with Russia, operates reassuring for European allies US who were concerned about a possible change in US attitude to the aggressive rhetoric of.

On the other hand, the positive climate that formed the US relations with China, and information on a personal ties of cooperation between Presidents Trump and Si Tzinpingk, They can cultivate a climate of confusion among US allies in Asia, lest expansion of Chinese influence in economic and geopolitical level in the wider Asian region.

Changing the initially aggressive attitude of Trump on issues of US foreign policy and adopting a more conventional with American politics line, attributable to the change of influence relationships within his government, the gradual deterioration protoklasaton advisers, as strategist Steve Bannon. 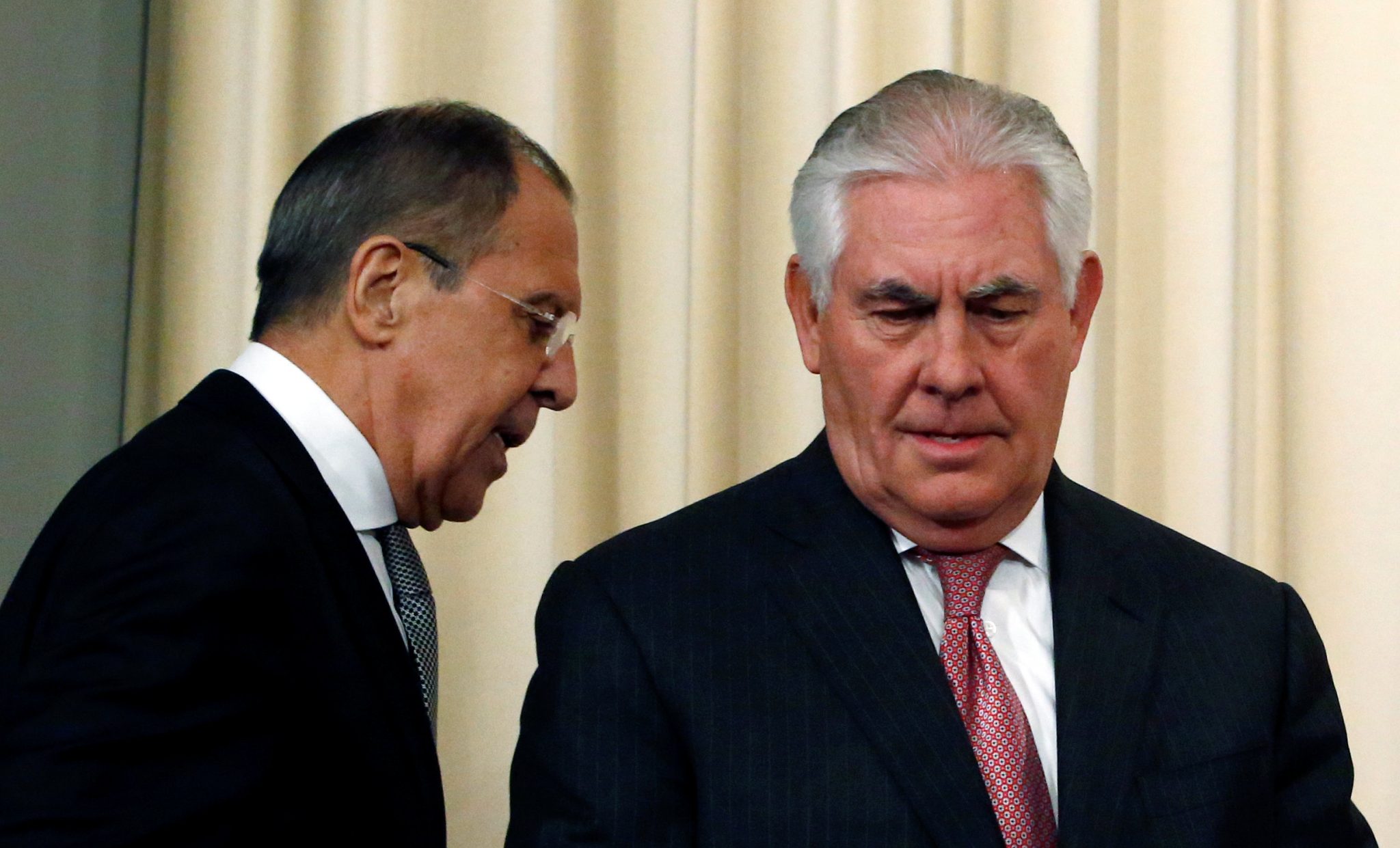 (The meeting of Russian Foreign Minister and US / REUTERS / Sergei Karpukhin)

However, he said Tuesday that he has great concern for the Russian support to the President of Syria Bashar al-Assad. "We must be at the lowest level ever in our relations with Russia,"Trump said after the massive missile attack last Friday at the air base in Syria.

Along with the criticism in Russia, The Trump said he and the president Shi cultivate a positive level of personal relationship during the visit of the second at Mar-a-Lago resort in Florida last week. Before the meeting, President Trump had planned to conduct "tough talks" for trade. 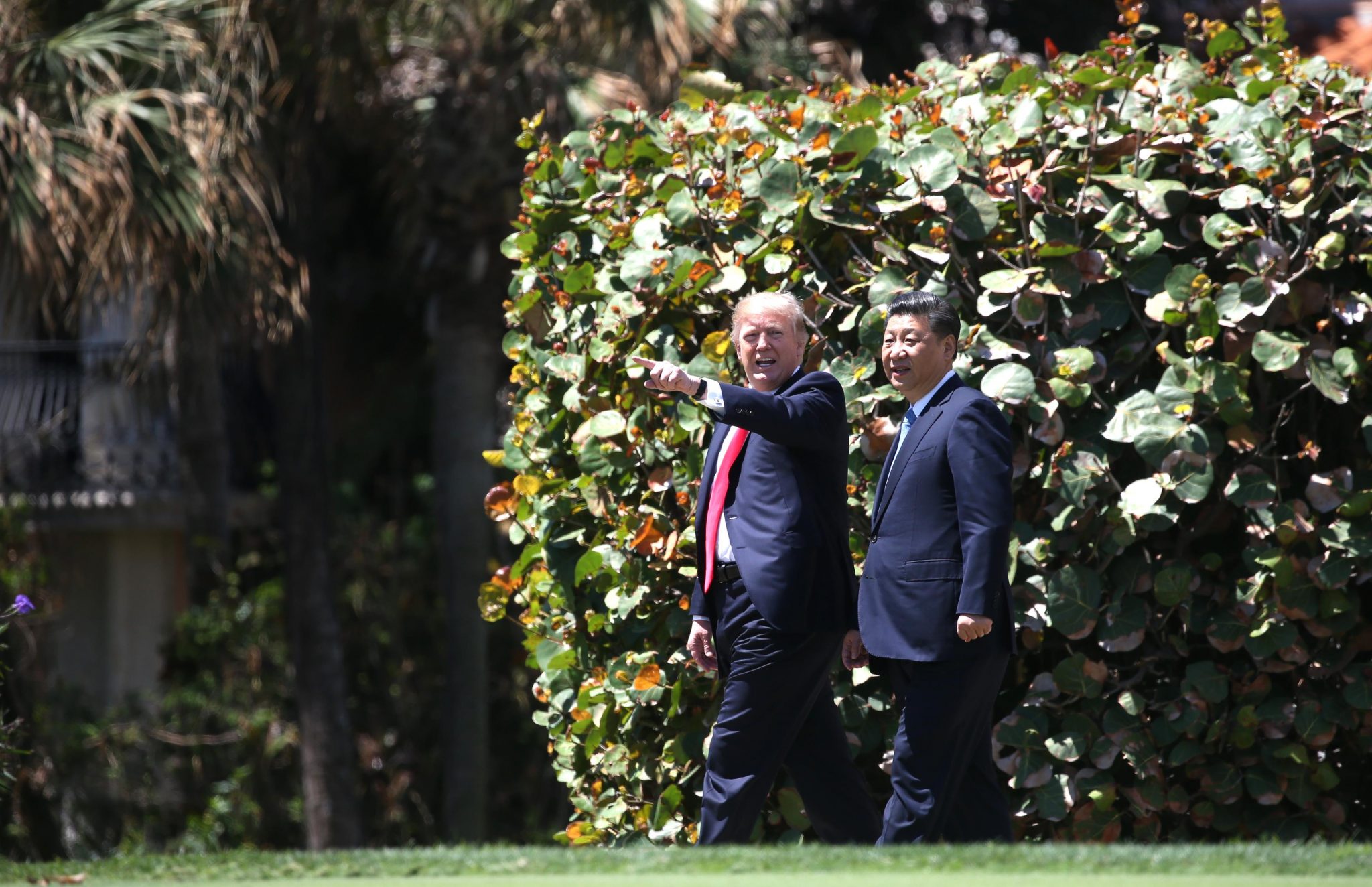 (The meeting in the resort Mar-a-Lago / REUTERS / Carlos Barria)

On the other hand, the positive climate that formed in relations between Washington and Beijing confirmed by the statements of Trump in the newspaper «The Wall Street Journal», according to which it will declare China as a country that manipulates its currency, unlike the promise made on the first day in the Oval Office.

The same, He assumed the presidential duties in 20 January, the central election announcement to keep America safe and advance the modernization of the armed forces of the USA

The Trump becomes "deeper understanding of many issues"

Christine Gouormouth, former defense minister in the previous US administration of Barack Obama, He said that at present the Trump "has begun’ acquires a diversified and deeper understanding on many issues ", she said, who is a consultant at the Center for Strategic and International Studies.

OR political mutation the attitude adopted by the Trump on foreign policy issues, shows n’ less reflects the positions of Executive group of election campaign and more the views of the Defense and Foreign Ministers James eyes and Rex Tilerson, and the National Security Advisor Herbert Raymond McMaster. These strains of the US government, They have publicly expressed skepticism about Russia. 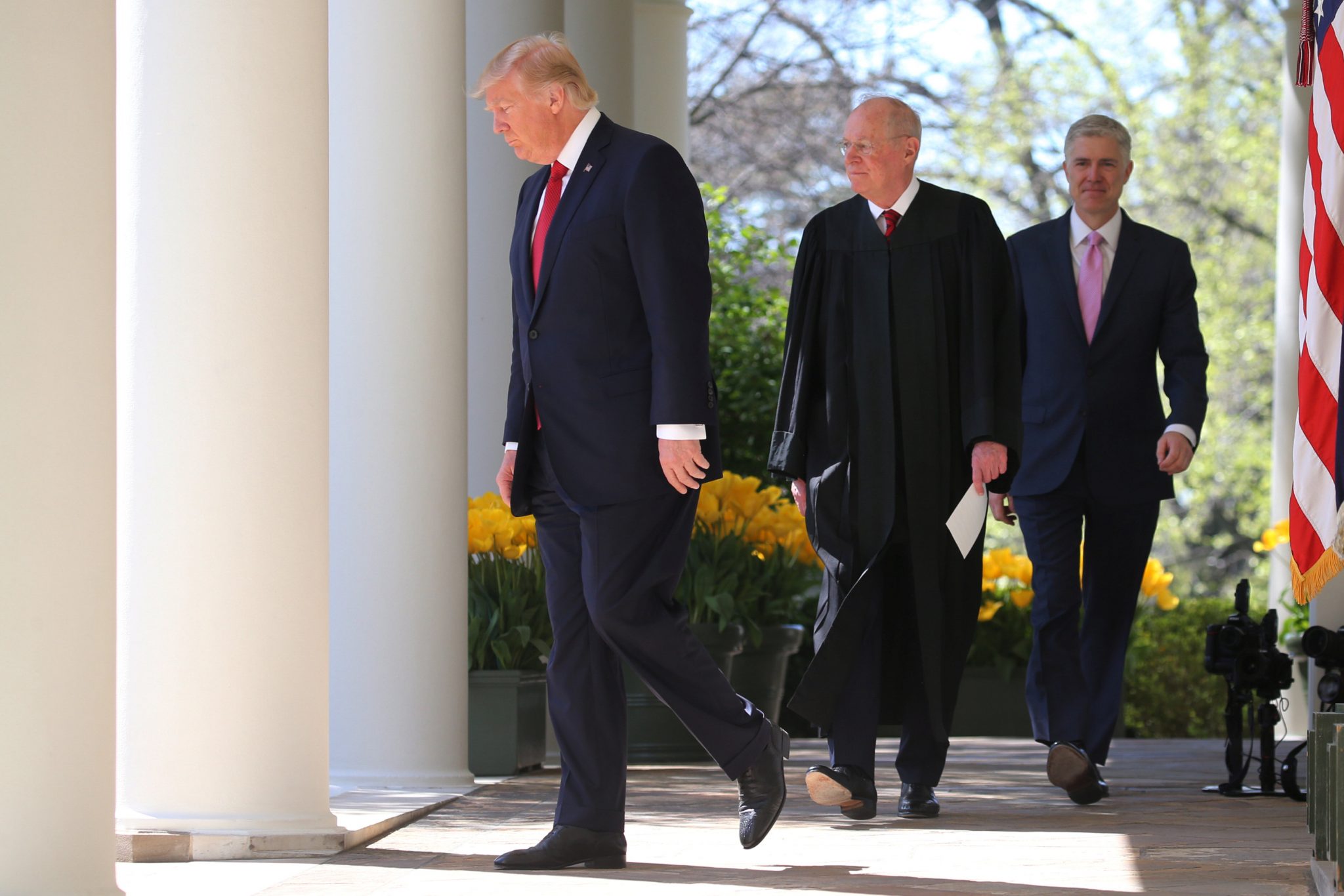 On the other hand, former National Security Advisor Trump, retired general Michael Flynn, It led to the resignation 13 February for communications he had with the ambassador of Russia in Washington, before assuming presidential duties from Trump.

The new tone in US foreign policy also attributed, in effort to normalize the balance Trump is doing within the narrow staff of consultants and associates, the White House, especially among hardline Bannon and senior adviser Jared Kouchner, which are also groom Trump.

During the interview in «The New York Times» newspaper Tuesday, the Trump offered modest support to Bannon. "I like Steve, but remember such role was only in the last stages of my campaign ", said Trump features.

Greece is making further preparations for summer tourism and has reopened all taverns as of today., bars and cafes in ...
Read more
Previous article Elected Regions: The cornerstone for the creation of a new governance model
Next article The sequence of Unction at the Church of Agia Kyriaki Mykonos
Share
Facebook
Twitter
Pinterest
WhatsApp
Linkedin
ReddIt
Viber
VK
Tumblr
Telegram
Mix
Digg
LINE
Email
Print