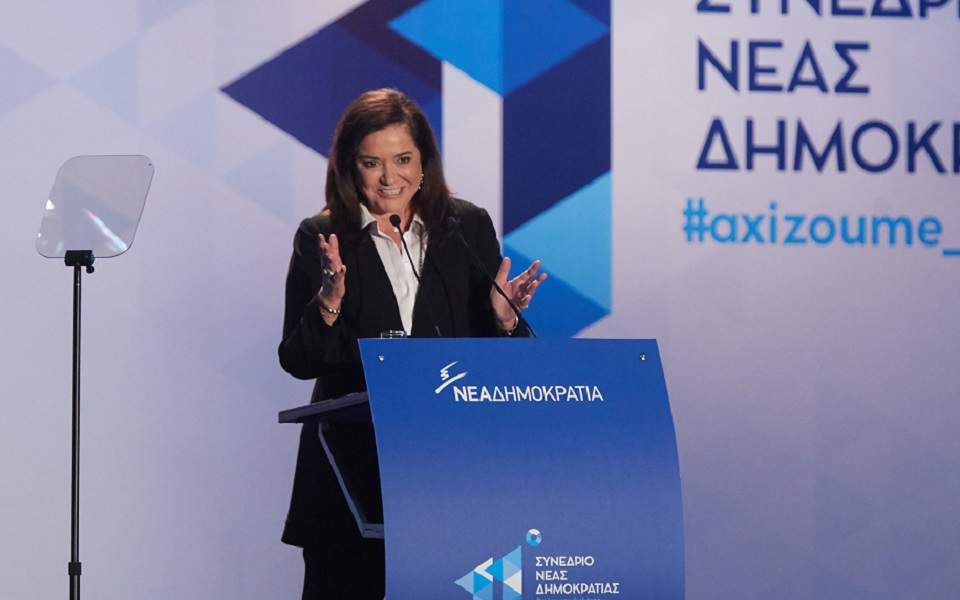 Intention of the New Republic, if it becomes government not repeal ypermeiomeno factor of six percent (6%) drug, books and Energy said…….. the radio station of Athens-Macedonian News Agency "Agency 104,9 FM »the Head of Sector Economy and Development of New Democracy, MP A’ Athens -ypopsifia MP Chania in the coming national elections- Dora Bakoyannis.

"Kyriakos Mitsotakis -the Greek people know- He has studied until Antenna program of New Democracy, just do not promise anything you can not deliver tomorrow ".

Regarding the stakes of the elections for the New Republic pointed: "Bet election is to have a stable government tomorrow, preferably self-contained, with a serious and responsible program, which can realize-this is the most serious- so that the country can finally emerge from the crisis, which afflicts the. The country needs stability and […] All stock market reactions, markets anticipate a stable government of ND and immediately see investor interest recorded ".

"On this", continued the Head of Sector ND, "We invite Greek citizens trust ND in this effort and I hope that we will find a response to the positive vote and not only by negative".

It is a complex issue development, but that markets have reacted like today reacted to the results of elections, namely the European elections to date just means that the economy seems to trust ND coming, not otherwise justify that kind of money to invest in the Greek stock exchange since the elections until today ", explained.

With,Regarding the timetable for implementation of the ND program said that "the first two years will significantly show the difference, the economy will move, and the first change of psychology will be directly ".

"What we saw yesterday was one of the old Tsipras, many promises […] Yesterday promised what by voting abolished MPs of SYRIZA Friday: The tax reduction, anything addressed to middle class -which are the big losers from the policy of SYRIZA- which functioned more mitigating for the middle class, ie the three day promised SYRIZA and voted, the un-passed yesterday. As if there is a class hatred towards the middle-not the rich- ie all those with an annual income over 20.000 euro".

"The SYRIZA program will not be able to bring the development of which is so talk all this time, because unfortunately the growth is not ordered. He said Mr. yesterday. Tsipras that will bring 500.000 jobs. How will bear when we speak growth is 1,3% instead 2,6%, which was the target; How will bring 500.000 well-paid jobs when 15.000 well-paid jobs would have been created in the Greek and Greek has still not entered a single bulldozer;»

questioned, Moreover, on the SW design for the public sector staffing and if there is an intention conservation 15.000 planned recruitment in Education, Ms. Bakoyannis assured that "Recruitment in areas where we really need" will remain.

"We will be hiring just because we create a new agency and put people through contractors to be able to do favors. It justified wage expansion of the state ", he stressed wondering:

"Today is 1,6 billion. above the cost of the state. seriously believe that 1,6 billion. gasped the citizens to better services;» .

as stated, many organizations created will close, while for the staff working their explained:

"If contractors and end their contract their contract expires. If seconded officials will return to their services, offering where the need or the Greek state where served before. There will be no new institutions, new boards, new fees for crony, all of which resulted in swelling of the state and all those who ultimately pays for the Greek people from their taxes, as 1,6 billion is a lot of money ".

In this context, he stressed the need to legislate the prohibition of recruitment, transfers of Others. six months before the elections.

"This has to stop. If there is provision, nor now could become what it became in the Greek Parliament a week ago, nor now could Mrs. Christodoulopoulou with tips to arrange matters daughter, because half would apply. This should be done institutionally ".

Probably over the weekend or Monday at the latest, 14 September, ENFIA statements are expected to be posted on Taxisnet. The total amount that ...
Read more
Previous article SYRIZA-Progressive Alliance: The 12 commitments for the next 4 years program
Next article ENFIA 2019: Double deduction up to 50% – What homeowners will be entitled
Share
Facebook
Twitter
Pinterest
WhatsApp
Linkedin
ReddIt
Viber
VK
Tumblr
Telegram
Mix
Digg
LINE
Email
Print