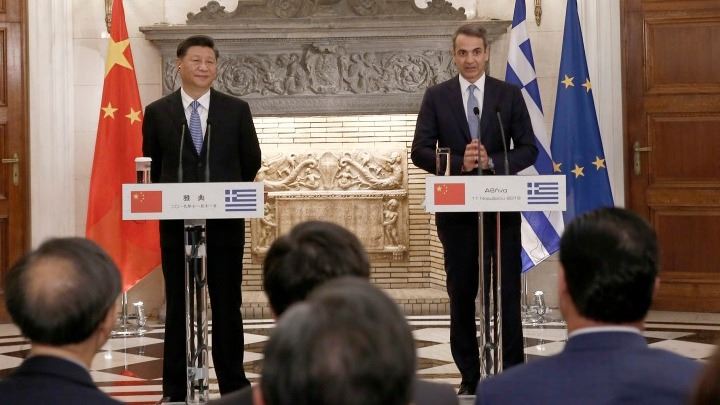 K.Mitsotakis: We expand our relationship with China, now that Greece is taking a lead role again

"In Athens, like Shanghai, shows that our relations are hotter than ever. Trust is given ", the prime minister said, Kyriakos Mitsotakis, during joint statements by the President of PR China, Shi Tzinpingk……….

"Broaden our relationship with China, now that Greece is taking a lead role again ", noted Prime Minister, Kyriakos Mitsotakis, during the joint declarations with the President of China, Shi Tzinpingk.

Mr.. Mitsotakis mentioned the importance of 16 agreements and the port of Piraeus, becoming important transit hub. Welcomed the arrival of Chinese banks in Greece and highlighted the strengthening of the tourist arrivals from China in our country.

New visit to China in April pragmatoiisei the Sun. Mitsotakis

"And Greece and China are important stage of reform and development", said Chinese President

"I want to convey sincere greetings and best wishes of the Chinese people to the Greek people. Greece is a country of ancient civilization, the cradle of classical Western civilization. Your country plays an important role in world history ", said President of PR China, Shi Tzinpingk, during joint statements by the Prime Minister, Kyriakos Mitsotakis.

"Simultaneously, The Greece is a beautiful and modern country. Generations smart Champions Greeks have found ways to develop, that are unique. Your country was the dominant maritime power worldwide and has grown in all sectors of the economy and society.

In recent years the Greeks showed great strength, They worked hard against great difficulties to restore their confidence and development ", added.

"As a friend of your country, I'm really glad that I see all these. I am convinced that nations who made wonderful cultures, which withstood millennia, anyway they can build a prosperous country. Both Greece and China are important stage of reform and development ", said Chinese President.

"We want to have investments in the energy sector, transport and banking ", highlighted Chinese President

"China and Greece are partners naturally to create a zone, a street. This initiative should be strengthened by further development of your country. We look forward to the implementation of cooperation in many areas and we want to strengthen the transit function of Piraeus and to strengthen further the capacity of land-sea rapid communication line, China-Europe '. This stressed the President of PR China, Shi Tzinpingk, during joint statements with the Greek Prime Minister, Kyriakos Mitsotakis.

"We want to continue trade, to expand bilateral trade and mutual investment, as well as to be investment in the energy sector, transport and banking ", highlighted Chinese President.

Sixteen agreements signed during the visit of Chinese President to Athens

Sixteen agreements that attract funds from China, launching a new round of upgrading works of the port of Piraeus from COSCO, further open the Chinese market to some Greek food industry products and strengthen the already close ties sinoellinikous in many fields, They will be signed within the visit of the President of the People's Republic of China, Shi Tzinpingk, in GREECE.

Specifically, according to government sources, the agreements signed during the visit of President of PR China in Greece are:

1. Treaty on extradition of wanted

Content: The Treaty on Extradition promotes effective cooperation in criminal matters and aims to suppress the crime based on mutual respect of sovereignty, equality and mutual benefit. It includes provisions concerning the purpose, the conditions, procedures and other relevant provisions to issue wanted person.

Content: These investment projects, in which the two sides attach great importance. The signing of the list is a quasi-command to the Chinese state-owned companies to consider their participation, investment or other, in these.

3. Memorandum of Understanding to promote two-way investment cooperation between Greece and China's Ministry of Commerce Ministry of Development and Investment.

Signed by the Minister of Development and Investment, Adonis Georgiadis and by China's Minister of Commerce, Zhong Shan.

Content: Strengthens the existing institutional framework and encouraged further bilateral cooperation in the investment sector and in general between the two parts of business.

4. Protocol between the Ministry of Rural Development and Food of Greece and China's General Administration of Customs for export saffron.

Signed by the Minister of Rural Development, Maki Voridis and from the Chinese side by the ambassador, Zhang Qiyue.

Content: the export will be allowed in the Chinese market of saffron, which is a product PDO, particular importance for the local economy.

5. Protocol for export kiwi fruit from Greece to China, between the Ministry of Agriculture and China's General Administration of Customs.

Signed by the Minister of Rural Development and Food, Maki Voridis and the Ambassador of the People's Republic of China, Zhang Qiyue.

Content: Extends the possibility of exporting Greek kiwifruit from all regions of the country to the Chinese market. Until now, this feature was only some areas.

6. MoU on broadcasting, electronic and audiovisual means between the General Secretariat of Greece and the National Broadcasting Authority of China Communication and Information.

Signed by the Deputy Prime Minster, responsible for issues of Communication and Information and government spokesman, Stelios Petsas and by Nie Chenxi, Administrator of National Radio and Television Administration.

Content: It aims to enhance bilateral cooperation in the fields of radio, television and electronic media and the development of cultural and technological relations between the two countries.

7. Memorandum of Understanding on cooperation in the field of sport between the Ministry of Culture and Sport and the Chinese Federation of Persons with Disabilities.

Signed by the Deputy Minister of Sports, Lefteris Avgenaki and the Ambassador of China, Zhang Qiyue.

8. Memorandum of Understanding between the Aviation Authorities of the Greek Republic and the People's Republic of China.

Signed by the Deputy Minister of Infrastructure, responsible for transport, John Kefalogianni and Feng Zhenglin, Administrator of Civil Aviation Administration of China.

Content: Includes, including, providing for multiple appointment airlines, and new Route, which includes all destination points on both sides, can run charter flights, and lease (leasing), when performing services on the agreed routes.

9. Agreement on establishment of the Center for Chinese Studies between the Chinese Academy of Social Sciences and the Institute Catherine Laskaridis.

Signed by the chairman of the Foundation Catherine Laskaridis, Panos Laskaridis and the president of Kinechikis Social Studies Academy, Xie Fuzhan.

Content: The Chinese Academy of Social Sciences, through the Foundation Catherine Laskarides, It is to establish Chinese Studies Center for the teaching of Chinese language and promoting Chinese culture.

10. Agreement between the Confucius Institute of China and Greece Thessaly Annex for establishment of the first to the second.

Signed by the rector of the University of Thessaly, Zisis Mamuris and the Ambassador of China, Zhang Qiyue.

11. Memorandum of Understanding for successful implementation of the Master Plan of COSCO Piraeus.

Signed by the Minister of Marine and Island Policy, John Plakiotakis and chairman Board of Directors of COSCO, Shipping Corporation Limited, Xu Lirong.

Content: -With formally declared- the willingness of both sides to overcome any obstacles to the implementation of the COSCO Piraeus port investment program, which is a top priority of the Chinese side.

12. Notice of branch of Bank of China in Athens.

Signed by the deputy governor of the Bank of Greece, Theodore Mitrakos and the Chairman of the Board of Bank of China, Liu Liange.

Content: Announced the establishment of a branch of Bank of China in Athens, fourth largest bank worldwide.

13. Notice of the Representative Office of China Industry and Commerce Bank in Athens.

Signed by the deputy governor of the Bank of Greece, Theodore Mitrakos and the president and executive director of the Industrial and Commercial Bank of China, Chen Siqing.

Content: Announced the establishment of a Representative Office of ICBC in Athens, largest bank worldwide.

14. Agreement for expressions of interest in the electricity interconnection project of mainland Greece and Crete.

Content: Indicated -with the most official way- Chinese interest in participating in the contest will be announced soon on the electrical interconnection of mainland Greece and Crete.

15. Cooperation Agreement for the creation of the project MINOS 50MW in Crete.

Signed -from Greek side- by President NUR Energie, Kevin Sara and chief executive Prenecon-Green Energy Holdings Plc, Dimitrios Bouras, and from the Chinese side by the president and executive director of the Industrial and Commercial Bank of China, Chen Siqing and the president of China Energy Engineering Group, Wang Jianping.

Content: Sealed cooperation between the two countries in Renewable Energy Sources, together with the project ensure the transfer and use of advanced Chinese technology to produce electricity in Crete, to significantly enhance the energy independence of the island.

16. Beam financing contracts for construction projects in the port of Piraeus.

Signed by Greek side by Deputy European Investment Bank, Andrew McDowell and director of the Piraeus Port Authority, Thanasis Liagos, and from the Chinese side by the President of the Export-Import Bank of China, Xu Xiaolian.