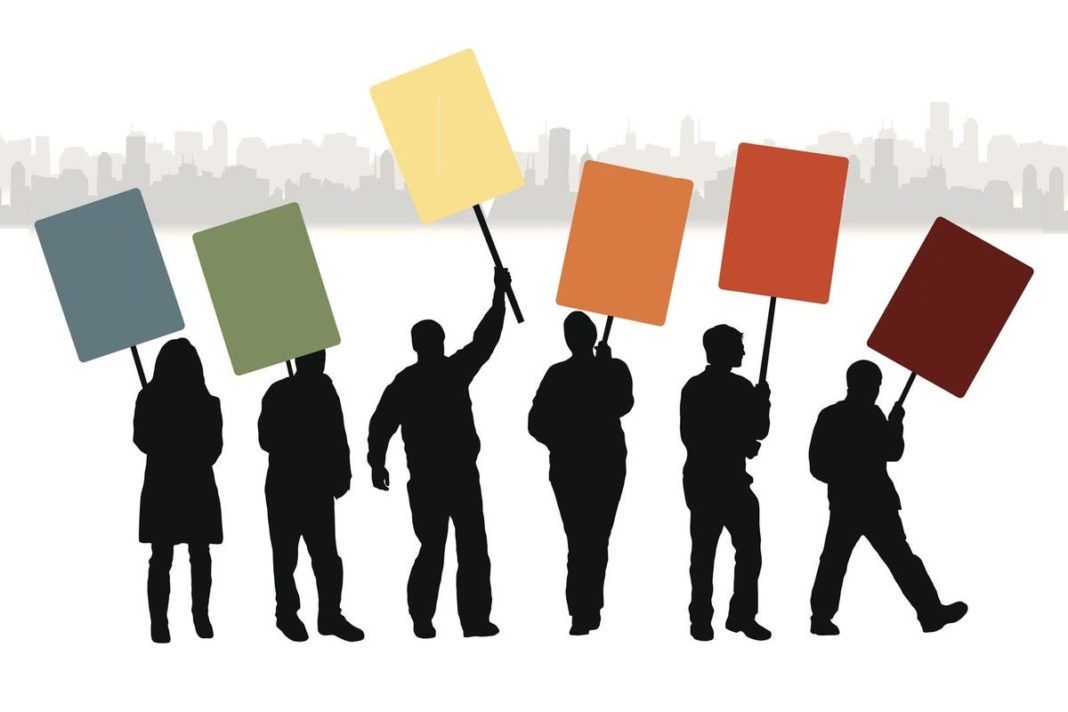 Draft law on "outdoor public gatherings". The government argues that the design aims to avoid traffic infarcts, and the excesses that cause groups intrude into demonstrations,…..

Also it will be determined "organizer" of the demonstration, which will have civil liability for damage, established the institution of police ombudsman and institutionalized special digital platform that provides real-time information to citizens about the procedures and the relevant traffic regulations.

End, the bill provides as an offense of statutory participation in a demonstration that has been legally banned by police, and the "obstruction of an assembly to commit violence and intrusion persons in this in order to alter by violence the peaceful nature of".

First, defined 'leader' each assembly that assumes responsibility for the peaceful realization and so in cooperation with the police.

Secondly, institutionalized, by decision of the Ministry of Citizen Protection, special digital platform, providing real-time information to citizens on the procedures and relevant traffic regulations.

Thirdly, the institution established the Police Ombudsman, to act as a link between the head of the police authority on the ground and the "organizer" of the demonstration to ensure cooperation between the two sides for the smooth conduct of.

Fourth, it is possible to dissolve a concentration or beam, if they take place while their conduct is legally banned, or participants do not comply with the restrictions set.

Fifth, to ban the forthcoming assembly enshrined responsibility of the Commission division of the Council of State.

Sixth, envisaged liability of the "organizer" for compensation for any damage. The "organizer" is exempt if he promptly notifies the protest and demonstrate that it had taken all necessary measures to prevent damage.

The main provisions of the bill are as follows:

The purpose of this law is to ensure the exercise of the right of assembly in public outdoors, so is exposed to a serious risk to public safety and not to disturb excessively the socio-economic life of a given area.

For the purposes of this Act, understood as:

1. 'Public outdoor gathering "is stationary or moving assemblage persons, temporary duration, performed after prior consultation or invitation to open, Non-walled space, for the same reason, such joint protest, projection views, formulating requests of any nature or relevant decisions.

2. "Spontaneous outdoor public gathering" is the public outdoor gathering, performed in response to the occurrence of a sudden event.

3. "Dissolution" is the termination of holding public outdoor gathering and the intentional or non-removal of synathroisthenton, after oral or written order of bystander police authority.

4. "Organizer" means a natural person or legal entity representative or association of persons to invite the general public to participate in outdoor public gathering.

5. "Restrictions" are the obligations imposed on participants, through relevant instructions of the police authority to exercise their right in accordance with the recommendations of. limitations, including, is the occupation of only the pavement or other public open space not walled, The partial differentiation of the moving assembly path, elimination and removal from the place of assembly of people flying objects and exhibit behaviors that put in jeopardy human life or limb or property rights of citizens or public property, and, the non obstruction of movement and access to public services, utilities and hospitals.

1. The organizer must inform the territorial Police Headquarters or Police Department, his intention to invite the general public or certain categories of persons or certain number of people to participate in public outdoor gathering, in a specific place and time.

2. The notification shall be in writing or via the internet platform of the Greek Police, forty-eight (48) hours at least before making public outdoor gathering.

3. Spontaneous public outdoor rally has not been notified as provided in the preceding paragraphs shall be allowed if there are emerging risks regarding breaches of public security or serious disruption of social and economic life. In this case the competent police authority invites the participants to define organizer, and may impose limitations in accordance with Article 8.

4. By decision of the Minister of Citizen Protection institutionalized special digital platform through which information is provided to citizens on current meetings and other events and associated with these traffic regulations.

The organizer of the rally:

a. Cooperates directly with the police authority and in particular with the Police Ombudsman and comply to their suggestions assisting in the effort to maintain order.

b. Inform the parties to rally for their obligation not to carry and use appropriate objects of violence and calls for police intervention to remove individuals carrying such objects.

c. Sets a sufficient number, which contribute to the safeguarding of assembly.

Obligations of the police authority

The locally competent police authority should ensure the unimpeded exercise of freedom of assembly in a public open space, as defined in Article 1 hereof.

1. Imminent outdoor public gathering may be prohibited if:

b. Threatened severe disruption of social and economic life of a given area. In this case, the police authority shall specify indicative, as alternatives, other areas, suitable for the realization of assembly.

2. The decision to ban outdoor public assembly shall be notified to the organizer noon (12) least two hours earlier.

For the decision to ban as imposing limitations are taken into account: (a) the estimated number of participants, (b) the realization of the region, (c) the degree of this risk.

1. Permitted restrictions in relation to forthcoming public outdoor gathering, if it is probable that the conduct would disproportionately disrupt the socio-economic life of the region concerned, in particular because of the special traffic and other special local conditions.

2. Permitted restrictions in relation to public outdoor gathering in progress, if the conduct causes a disproportionate disruption to the socio-economic life of the region, mainly because the number of participants.

The public outdoor gathering dissolution in progress may be ordered, if:

a. Place despite a prohibition decision.

b. Participants do not comply with the restrictions imposed in relation to this.

c. Turns into violent or its continuation causing immediate danger to life or physical integrity of the participants or participants are offenses.

d. Performed without having notified.

2. The means that the police authority may use should, in any case be the appropriate, necessary and proportionate to the circumstances, taking into account the type of assembly, the number of participants and offenses committed or that their marriage is likely seriously.

The public outdoor rally organizer who refused, He is entitled to request the suspension of the execution of the decision by the Committee of Suspensions of the Council of State.

1. The organizer may request the annulment of the decision which banned public outdoor gathering with a request before the Council of State.

2. The organizer may request the annulment of the decision which imposed restrictions on outdoor public gathering or decision which is dissolved, with application to the locally competent Administrative Court, trying at first and last instance.

Mykonos: New measures to protect citizens and workers in the ADS of the Municipality of Mykonos

Following the measures taken by the Government and the Municipality of Mykonos to reduce the spread of the coronavirus and the prevention and protection of ...
Read more

The Celestyal Cruises temporarily suspends all cruises up to May 1 2020, as a precautionary measure due to unavoidable circumstances arising ...
Read more

The Viking Cruises suspends all cruises until May 1 citing coronavirus

In a remarkable series of communications because of coronavirus, the Viking cruise company announced last night that inhibits its activity ...... of 73 the cruise ...
Read more
Previous article Closing date for the OTA 13 Of March, to send 3-year data on the quality of water [Documents]
Next article generous funding 7,34 from. € from the Region European funds for the recruitment of Tommy N.. Aegean
Share
Facebook
Twitter
Pinterest
WhatsApp
Linkedin
ReddIt
Viber
VK
Tumblr
Telegram
Mix
Digg
LINE
Email
Print

Municipality of Mykonos : It established a three-member committee to prevent and treat coronavirus in Mykonos

The world: Germany – US dispute for the exclusivity of a new vaccine against coronavirus

A laboratory Bra-wrestling develops between Germany and the United States to ensure the exclusivity of a vaccine against the new coronavirus ...
Read more
View more