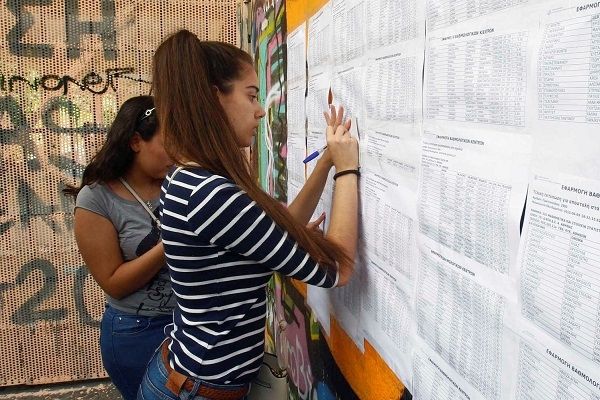 "Cutter" for entrants: Only 19aria in Medicine, polytechnic, law

Unlike their predecessors, who went into "minor" in the popular parts of central institutions for the easing of the "waves" freshmen, Mr.. Gavroglou clipping drastically newcomers students for the next academic year in most faculties of Health Sciences (Medicine, Biology, pharmacy). Limits the number of admitted students in polytechnics (SS.: and in TEI), launches the bases on architectural schools with a further decline of last year that reached up 50 enrollments, while for the Legal quite difficult to enter the most beloved faculty candidates in Humanities.

The "cutter" in the number of students admitted to universities and the limited growth in parts of TEI (SS.: last year were given extra 2.000 positions in TEI, while this year 500) is an initial goodwill gesture on the part of the Minister of Education towards Higher Institutions have seen in recent years their auditoriums to sink as a result of the increased number of admissions and transfers in some cases doubling the original number, of course without the corresponding economic funding to enable them.

"Massacre" of candidates will be made for a position at the Law. The School of Athens loses 20 seats, while Thessaloniki 50, greatly reducing the possibility of introducing. Conversely, increased by 20 Legal positions Komotini. In Psychology Schools, Sociology, Literature and Media, the number in the central institutions remained about the same, while the regional shown a slight increase in order to vent the tens of thousands of candidates (SS. last year was 27.000) claiming few positions in the first field.

2the field-Positive and Technological Studies:

From 10 until 30 seats, The polytechnics are reducing the number admitted harder candidates. NTUA, the Mechanical faculty loses 10 seats, while the Electrical 20. Even more marked fall in Chemical Engineering with loss 30 positions. Similar changes are observed in the polytechnics of other Institutions. Tightens the ringer for stakeholders of Architecture, in which the number of admitted students is shrinking even 30 seats. Fixed remain Agronomic, which last year recorded a marked increase in their bases up 2.000 molecules.

Clipping have been the Physics, with Mathematics Athens losing 50 seats, while IT schools, opened first time this year for candidates of the 2nd scientific field, lose some positions mainly in the central institutions, while remaining stable in regional.

In "red" expected bases in Medical Schools, Biology, Pharmacy and the "allied", as it has become strong scissors in number of admissions. The Medical seems to maintain the threshold of 19, with potential to play their position in the molecule .... Medical Athens and Thessaloniki lose 50 positions each, 30 Thrace and Crete, 20 Universities in Thessaly, Ioannina and Patras. Geometric cathode exhibit portions of Biology 10 until 25 seats. "Dark" will find and candidates directed at schools such as the Nursing and Midwifery, where the loss reaches up to 30 seats. A decrease in Chemistry schools opened this year for candidates of the third field, while outlet can find candidates in Food Technology faculty recorded slight increase.

Stationary remains the number admitted by the Pedagogical Departments, other than those at the central Institutions. The sharp decline that occurred last year in the section bases held this year on the eve of the same number of students admitted to these institutions. In Athens and Thessaloniki, the number of admissions clipped by 10-25 seats, while a slight decrease occurs in Special Education Volos. Conversely, Pedagogical University of the Aegean wins 50 seats. Remain stable schools Theater opened their doors this year to candidates of the 4th scientific field.

Drastic reduction accepts AUEB (Opa) until 30 positions in all schools, remains constant while the University of Piraeus. The Accounting schools reduce their enrollments, the same tactics to be followed in the same department at TEI Piraeus, that loses 40 places and this is one of the most popular choices of candidates. Information and Computer Engineering faculties remain stable, with a small increase in the regions, while business schools in the province, mainly in the Aegean University, show slight increase.

While the increases in most of the schools have been targeted without deplorable incident (SS.: Trani exception textile portion which bears 100 additional enrollments), The surprise lies in the Higher Ecclesiastical Academies (AEA). In these the number admitted splashing, even in a case sextuple!

It is worth recalling that last year -and while the trend was upward in positions- the number of students enrolling in Higher Ecclesiastical Academies trimmed even during 70 seats. Kostas Gavroglou, with minimal changes, returns this year the number of students enrolling in AEA levels were before the sharp decline that took place was minister Nikos Filis.

indicative, Seminary program in the admissions increased by positions 20 in Athens, 40 in Ioannina, 50 in Crete 10 in Thessaloniki. Respectively, posts increase in ecclesiastical relics management program in 30 in Athens 15 in Thessaloniki, while in Church Music program at Chanting 50 in Ioannina 70 in Crete. The Chanting in Ioannina last year offered only 10 seats, and this year offers 60. The limit on the number of students enrolling in AEA last year just 40 students, while this year 90.
"Galantomos" was the education minister and the admissions positions in Theology, University of Athens, wherein the increase 55 positions (SS.: from 170 in 225) it was remarkable, when they lost at the same time 1.000 places at universities. Increase 40 position recorded in Social Theology of Athens, while Theology of AUTH loses 30 seats.

HOPE Economides – From the print edition of free press

Probably over the weekend or Monday at the latest, 14 September, ENFIA statements are expected to be posted on Taxisnet. The total amount that ...
Read more
Previous article Gavroglou: High school as it is today is over – the Panhellenic is fair but not Reliable (Video)
Next article At 08 April 2017 the completion of construction work in Mykonos Town
Share
Facebook
Twitter
Pinterest
WhatsApp
Linkedin
ReddIt
Viber
VK
Tumblr
Telegram
Mix
Digg
LINE
Email
Print

The new measures for the cessation of the coronavirus in Attica which is "in the red" with a multitude of cases, announced the sub. Υγείας στην ενημέρωση που...
Read more
Breaking News