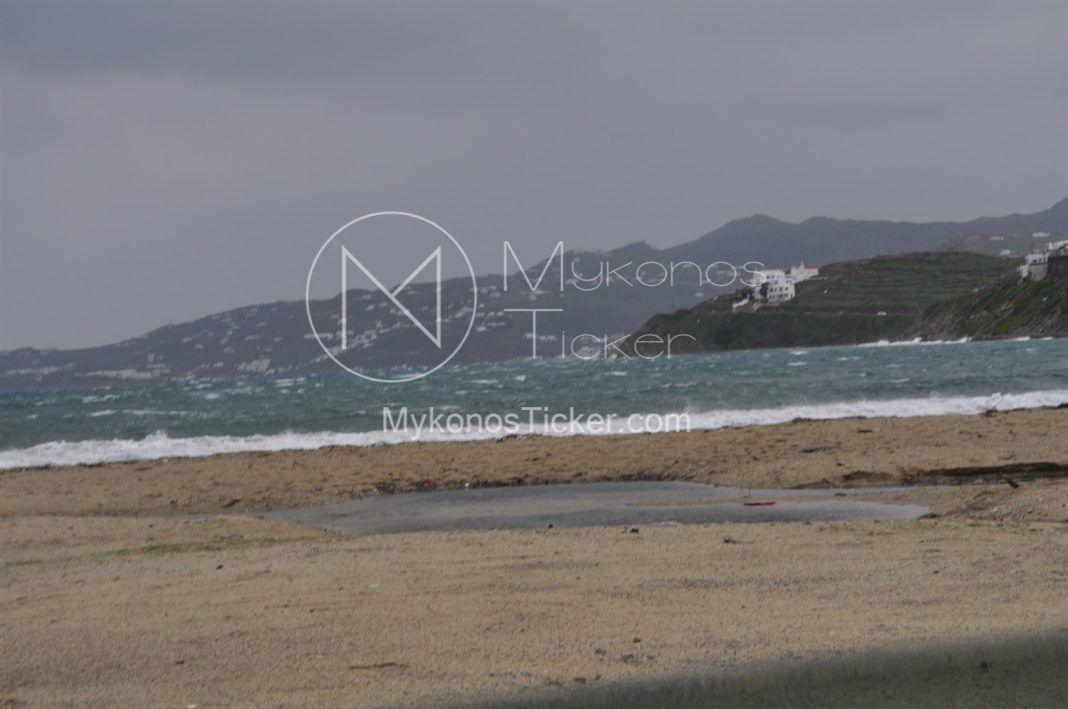 Cyclades- Sudden worsening of weather with showers and thunderstorms

Sudden change of weather in the Cyclades Friday, with rains and storms, according to the forecast of CMH………
Snowfall will occur in the central and northern highlands.
The winds will blow from the south directions 4 with 6 Sea and local 7 Beaufort. On the evening in the west and the north will turn to a northward direction 5 with 7 and the night in the local Ionian 8 Beaufort. The temperature is even slightly decreased compared with the maximum values.
The weather forecast from CMH

MACEDONIA, THRACE
Weather: Cloudy with local showers initially to the west and gradually the rest. After noon sporadic storms will occur mainly in marine and coastal. Snowfall will occur in the highlands.
Winds: Southern southeasterly 3 with 4 Beaufort. On the afternoon from the west will turn into a northward direction 4 with 5 and in the evening 6 Beaufort.
Temperature: From 01 until 12 Celsius degrees. In Western Macedonia 3 with 4 degrees lower.

THESSALY, EASTERN CENTRAL, EUBOEA, EASTERN PELOPONNESE
Weather: Clouds will quickly increase from noon local rain will occur the evening local thunderstorms in the north. Snowfall will be scored in mountains of Thessaly and Eastern Mainland.
Winds: From southern directions 3 with 5, reinforcing noon in the central and southern local to 6 Beaufort. At night in the north will turn to a northward direction 5 with 6 Beaufort.
Temperature: From 06 until 16 Celsius degrees. North locally 3 with 4 degrees lower.

CYCLADES, CRETE
Weather: Cloudy transiently increased with local showers after noon so they occur and isolated thunderstorms mainly in the Cyclades.
Winds: From southern directions 4 with 6 Beaufort.
Temperature: From 09 until 16 degrees Celsius in northern Crete maximum will be 2 with 3 degrees higher.

ISLAND EAST AEGEAN, DODECANESE
Weather: Cloudy with local showers initially in the Dodecanese and from noon on the islands of the eastern Aegean, so will occur and sporadic storms.
Winds: From southern directions 4 with 6 and south local 7 Beaufort.
Temperature: From 10 until 17 Celsius degrees. North 2 with 4 degrees lower.

THESSALONIKI
Weather: Clouds will quickly increase and there will be local showers and isolated thunderstorms in the afternoon.
Winds: From southern directions 3 with 4, turning the night into northern 4 with 6 Beaufort.
Temperature: From 06 until 12 Celsius degrees.

Weather: How will the weather change over the next two days
Change will present the weather from Friday morning 14/02 to Saturday 15/02 according to the information of Meteo. The coming storm due to a low barometric, whose center will move quickly, across our country from northwest to southeast. A similar will be the course of events (rains / thunderstorms), which will affect the Friday morning 14/02 the west and northwest and then almost the entire country, while Friday night 14/02 to Saturday 15/02 They will be limited in the Aegean and the eastern continental. Appearances local will be strong. The Aegean winds will reach 7 Beaufort Friday 14/02 and 8 with 9 Beaufort Saturday 15/02, while in the Sea will be weaker in 1 until 2 Beaufort. The temperature will show a small decline.

The maps below show the movement of the low, the precipitation and the speed and direction of wind during the weekend Friday 14/02 - Saturday 15/02.

The Ministry of Development and Investment, issued a New Circular clarifying the terms and conditions of operation of catering stores. There is a report, including,...
Read more
Previous article Blue Star Ferries: Configuring route due to the strike of the Navy. on Tuesday 18/2
Next article Teacher Trust schools!! The institution, in which children resorting to combat bullying & anything employs!!
Share
Facebook
Twitter
Pinterest
WhatsApp
Linkedin
ReddIt
Viber
VK
Tumblr
Telegram
Mix
Digg
LINE
Email
Print