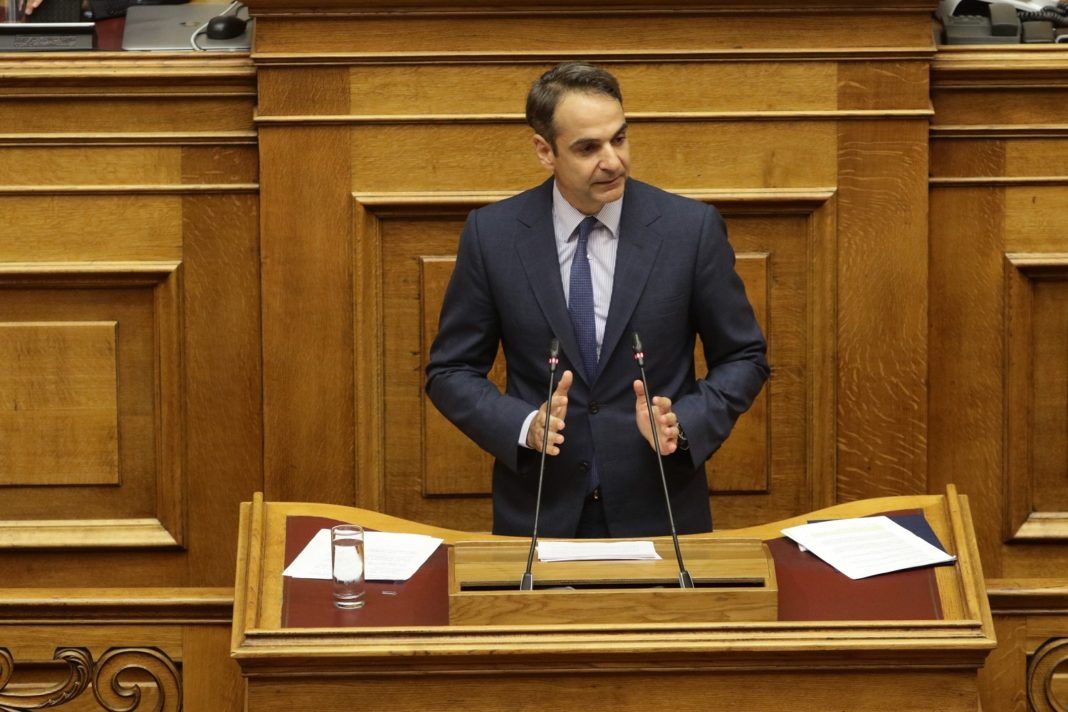 Sun. Mitsotakis in House: The Capital Controls are past 1 September – What are the limitations

The complete elimination of capital controls, announced from the floor of the House by the Prime Minister, Kyriakos Mitsotakis – What are the limitations…….

"Today", He said in his speech, "In cooperation with the Bank of Greece fully restore normalcy on capital movements', he said.

"The first half of 2015 caused the exodus of tens of billions euros culminating in June the closure of banks and restrictions on capital flows and cash withdrawals.

The elections have restored confidence in our banking system […]

Today, closes a cycle of insecurity and capital controls abolished and simultaneously opens the country a new cycle of optimism ".

Immediately after, the Minister, Christos Staikouras, tabled the amendment.

The Prime Minister spoke about the bill on the protection of personal data.

The country, he said, coordinated with the Community acquis delayed for 14 months and led to fines 5.500 Euro per day.

"The bill settings", the prime minister said, "They are critical and necessary because they are development steps, modernization and democracy and are components of our government ".

Making offered specific reference to the removal of fuel from the plot in the Eye, and the renegotiation of ERT television rights for football, leading to "save ourselves 35 million euro ", he said, stressing that "despite complaints, The league normally started ".

He noted further that "the battle with the summer fires that continue, show our daily presence alongside its citizens'.

"The bill that the government submitted shows that it was prepared in advance and that its engagement.

In the same direction moves the current draft law on personal data ', the prime minister said and added that "plan, speed and effect is the government's compass ".

"So we moved the first 40-day and so will move the next four years, with program, consistency and produce measurable project ", he said.

"The protection of personal data on the Internet is crucial and a key sector for the economy, and Democracy ", the prime minister said and added:

Europe in this field was pioneered and set up penalties majors.

It is about, Well, an important step in the country's modernization and social responsibility while a step […]

Practically new framework bringing order to blur the internet sites that remain unregulated. Nobody will be able to use the data of another without the consent of the employer and one can not use the information for workers on their weight.

The personal data of citizens will only concern themselves.

Anyone today trafficked volumes of data to unknown usage you should think.

Those operators will gain prestige and confidence.

The right to freedom of information in line with the protection of personal data ".

End, Prime Minister asked to vote on all the draft, something that will be argued before the European Court.

What are the limitations

By limiting 10.000 EUR excluding permanent residents abroad. also, exempted from the restriction and authorized persons of shipping companies for the needs of the ship («cash-to master») up to the amount of 50.000 euro per day as an upper limit, by producing documents to the competent customs authority. These documents have been defined by the Commission decision approving Banking.

Trading as 100.000 euro / day on presentation of invoices and other supporting documents and, which will necessarily be accompanied by a declaration confirming that those documents presented are authentic and have not been submitted to another bank.

Payment of hospital fees and medical expenses is limited without the approval by the Commission Approval Banking under the following conditions:

transfer to 8.000 EUR / quarter for overseas students, where those amounts credited to student accounts outbreak or student housing landlord, by presenting a lease or other relevant documents.

The tuition payment, made without the approval limit of the Banking Commission approval under the following conditions:

also, It allows maximum transfer 5.000 euros or the equivalent thereof in foreign currency, per calendar quarter, in total, for student accommodation and subsistence costs of studying abroad or participate in student exchange programs. Payment occurs, mandatory, into account, held abroad, with beneficiary student.

By limiting excluded employees in diplomatic missions, Permanent Representations of Greek or other government agencies.

also, employees of diplomatic missions, permanent representations or other services of the Greek Government abroad, who keep payroll accounts at a bank established and operating in Greece, allowed to carry the equivalent of their salary to their account abroad, writing showing their status.

If companies operating in Greece have installed terminal card payment acceptance (POS) from foreign banks and the clearing of card transactions made to an account held with a foreign bank, οι πιστωτικές, debit and prepaid cards issued by banks and electronic money institutions operating in Greece shall be prohibited unless given special for this purpose authorized by the Commission for the Approval Banking.

Not allowed the following broad categories of transactions via internet where online stores clearing card transactions to an account held with a foreign bank: