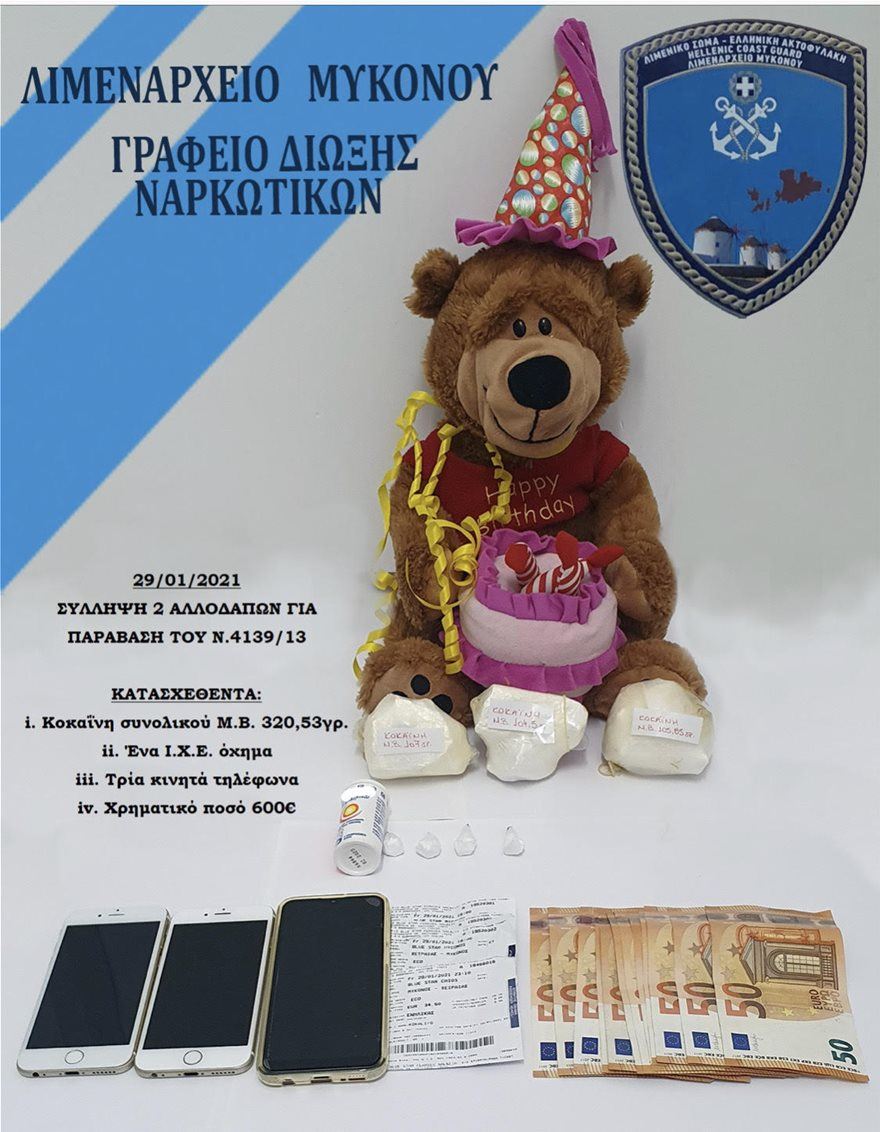 Adrian is a 43-year-old Albanian, known by the code name "Mars" and his right hand is a 32-year-old charming blonde woman Nela, were arrested by the officers of the Drug Prosecution of the Mykonos Port Authority with the assistance of the General Affairs Department of the Drug Prosecution Sub-Directorate of Thessaloniki………….
Adrian, a 45-year-old Albanian, is said to be the leader of the Mykonos winter dealers' circuit, known in the squares of Athens and Mykonos with the code name "Aris" and in his right hand a charming blonde woman Nela. indeed, πηγαινοέρχονταν στην Αθήνα για να ψωνίζουν κόκα και να τη ρίχνουν στην πελατεία του νησιού των ανέμων, using teddy bears to hide the "white lady".

b) the transfer of the quantities of drugs seized by the circuit to Mykonos for their further trafficking to other persons - their associates residing in Mykonos.

In the context of coordinated police checks, the above aliens were found to be leaving 29-01-2021 from E / G-O / G ship in the port of Mykonos, the 43-year-old with a car while the 32-year-old as a pedestrian. Both were then placed under discreet surveillance. Early morning hours today, officers of the Drug Prosecution Office with the assistance of an operator accompanying a drug detection escort dog of the Mykonos Port Authority, immobilized both foreigners who were moving by car. vehicle heading to the port of Mykonos.

After a thorough inspection, it was found that the 32-year-old was carefully transported hidden in a toy., three (03) nylon packages with a quantity of cocaine, in the form of a rock, three hundred and seventeen grams and thirty-five tenths of a gram (317,35g), and the 43-year-old to transfer and voluntarily surrender four (04) improvised weighted nylon packaging, containing white cocaine powder weighing a total of three grams and eighteen tenths of a gram (3,18g).

The investigation of our service verified the data of the above executive "Aris" and specifically that he is the accused resident of Mykonos - Cantounia area and that he moves with the sub-number (s.s. refers to the number) red Volkswagen vehicle ». indeed, as they typically report under the microscope, his travels also entered 43 time in Athens "The accused was in Athens about 10 days and was planning the transfer of a quantity of cocaine to Mykonos by ship of the line which was procured by an associate of the unknown other elements in Athens ".

Preliminary investigation is carried out by the Mykonos Port Authority, while they were confiscated in total, one (01) car. vehicle, three (03) mobile phones and the sum of six hundred euros (600€).

Previous article Schools during the Covid-19: Courses on holidays and vacations, to make up for lost hours!!
Next article Renting during coronavirus: A guide for businesses and landlords for reduced rents – Who are exempt
Share
Facebook
Twitter
Pinterest
WhatsApp
Linkedin
ReddIt
Viber
VK
Tumblr
Telegram
Mix
Digg
LINE
Email
Print