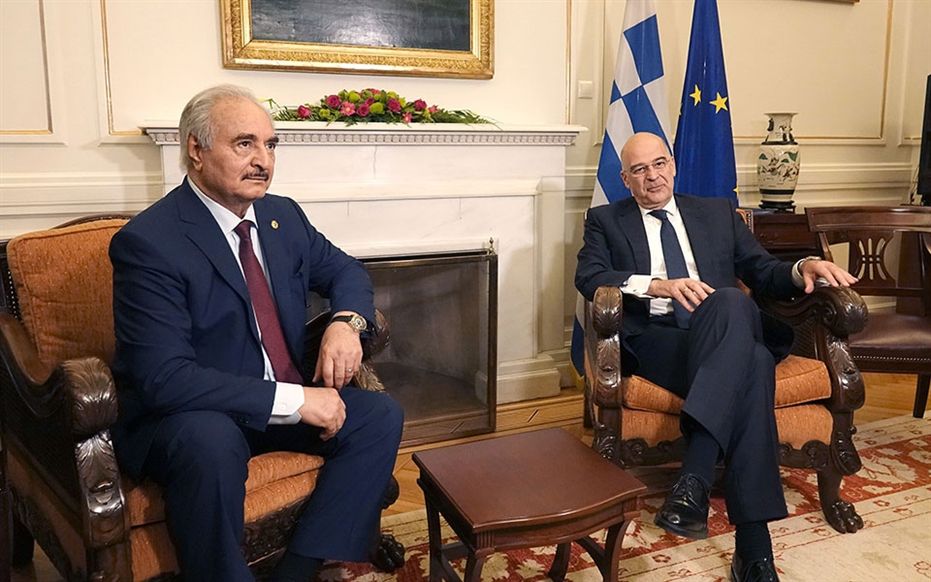 N. Dendias: The Chaftar agree with all the comments of Greece – Ready to help the next day in Libya

Marshal Chaftar agreed with all observations of Greece, including the need for recognition of invalidity of illegal understandings between Turkey and the Government Saratz, pointed out ……..Foreign Minister Nikos Dendias after meeting with the head of the Libyan National Army (LNA), Marshal Khalifa Chaftar (Khalifa Haftar), Foreign Ministry.

"From our side we encouraged the Marshal to participate constructively in the Berlin process and attempt, within the framework of the Treaties, to succeed and a cease-fire and to restore security in Libya, removal of mercenaries, recognition of invalidity of illegal understandings between Turkey and the Saratz government ", said Mr.. Dendias and added: "I can tell you with great pleasure that Marshal Chaftar agreed to us all these comments».

The Greek foreign minister stressed that Greece expects Germany to express the common European position and to recognize the invalidity and the absence of Turkey memoranda- Libya.

"Europe has a clear position, expressed by the last European Council ", stated Mr.. Dendias. "Our common European position recognizes the nullity and lack of understandings signed by Saratz government and Turkey. So as Europeans expect Germany to impose and to express the European position at the Berlin process. So we wait and from other countries-EU members involved in this process ".

Asked about whether Greece will veto a political solution in Libya, if the agreement with Turkey is not revoked, Mr.. Dendias pointed: "We want to engage constructively to reach the Berlin process. Helping UN procedures. On the other, Nevertheless, in this process we try to help in our capacity not only in Greece, but also as a European country. The framework of the participation of all European countries in the process established by the European Council Decision ".

The Foreign Minister also stated that "Greece is ready to help the next day in Libya, either by participating in those forces, which need to have the truce, either with the participation of Greek forces in the European enforcement operation of the arms embargo and transport of mercenaries in Libya ".

"These actions help to create a better reality in Libya and are contributing to the future of the Libyan people and the Libyan society. We want Libya to be a modern democratic country, which will allow residents to express their will and be part of the overall architecture, stability and security in the region ", noted Mr.. Dendias.

The new five euro banknotes signed by Christine Lagarde are now a fact!! She presented them herself ..... Ms. Lagarde was photographed with pride ...
Read more
Previous article Workers break: Clarifications to the law on the break in stores, obligations of employers, They can withdraw from their work
Next article 40 Deco Styling Ideas, for Libraries!!
Share
Facebook
Twitter
Pinterest
WhatsApp
Linkedin
ReddIt
Viber
VK
Tumblr
Telegram
Mix
Digg
LINE
Email
Print

US Election 2020: TIME changed its logo to "VOTE" to encourage readers to vote – For the first time in its history

The electronic platform is expected to be launched in November, through which Greek voters abroad will be registered in the special electoral lists,...
Read more
View more