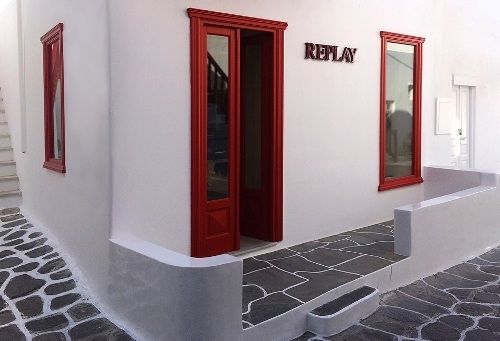 meeting place for lovers of the brand worldwide. You will immediately stand out, making your ride in the country, graphics Matogiannia.

The new franchise REPLAY STORE, It is the result of cooperation of the company Fashion Box Hellas SA. and known businessmen Mykonos Stamatis and Anna Xidakis, not included in the development plans of the company providing for further development of the branch network, through franchise partnerships, in prime tourist areas of our country.

With the opening of its new store, The Replay strengthens the close ties it maintains with the island of winds in recent years. Landmark of this relationship was, last year, the choice of Mykonos for conducting the annual World Congress of Replay, which received unprecedented success and international reputation of our country. A conference attended by more than 600 Delegates from around the world and was accompanied by the presentation of the new collection and new Replay products.

Respect the existing museum regime of Hagia Sophia, which is officially recognized by UNESCO, calls on the Turkish government the American ...
Read more

They "remove" insidious police officers from Asfalia and Katehaki, after the revelations about a corruption ring!! Mykonos is in the spotlight!!

EYP for corruption ring of EL.AS.: A corruption ring with police officers has been dismantled!! They took money from blackmail and protection!! Officers were "taken away" after the revelations!! Members ...
Read more

The resumption of a limited number of flights from abroad to all airports in the country, yesterday Wednesday, έρχεται σε μια στιγμή που οι προσδοκίες...
Read more
Breaking News

28 new confirmed cases of coronavirus cases reported in the last 24 hours in our country , bringing the total cases to 3.458, as he announced in writing the ....
Read more
View more