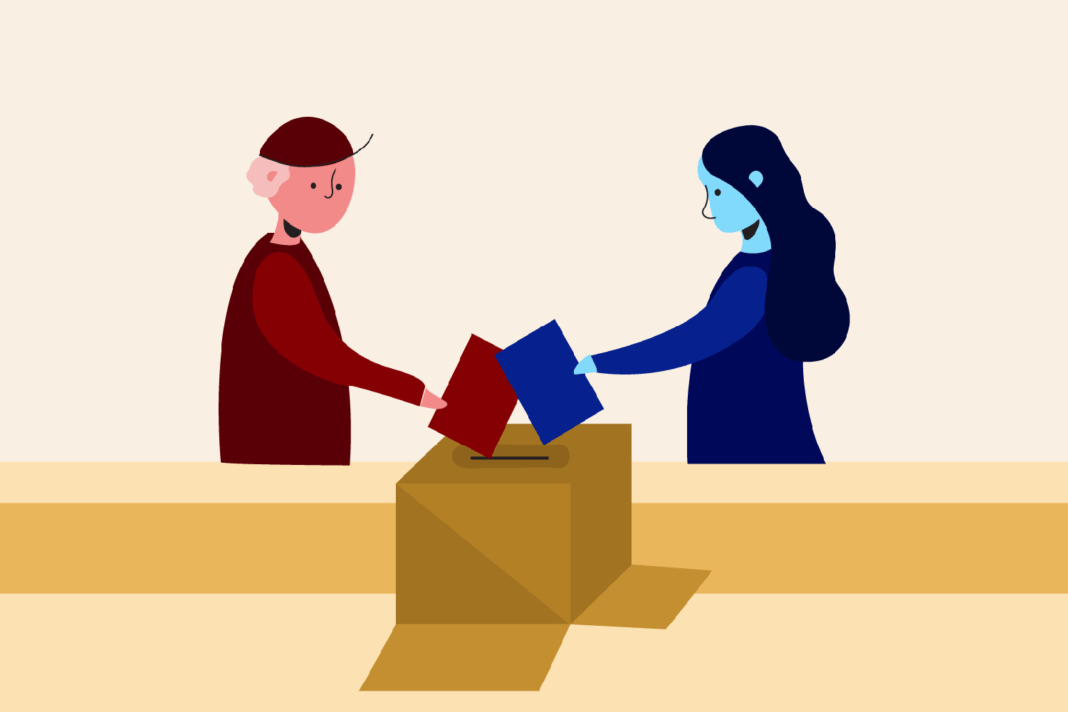 New Electoral Law: 37% the threshold of self-reliance!! Designs for the electoral law

In a voting system that would provide that the first party to ensure self-reliance if gathers rate in the region 37%…….

The intentions of the government It is not to increase the limit 3% required in order for a party to enter parliament.

Constitutional revision: The ND gamble with the electoral law – No changes Article 54

The disconnection direction of the electoral law by the constitutional revision seems selects Kyriakos Mitsotakis, rejecting negotiation scenario or compromise with the Change Movement.

The decision may not be marked at this time irrevocable, However, government officials have knowledge of the strategy and policy of targeting the prime minister, horizon in the coming national polls, emphasize that the affirmation of "identified" with plan A: namely the ruling majority proceeds without changing Article 54, who summed the SW and KINAL forces would "circumvent" the proportional, adopt its own "majority" with law "possible" bonus for the first party, President of the Republic elect the person proposed and directed for double elections (with simple analog and the new law then) or at the end of four years or another time dimoskopikis and political flowering of the ruling party.

But there is also the plan B, he described a few days ago Deputy Prime Minister Panagiotis Pikrammenos and which proposed a month ago in his article Nikos Alivizatos: the Memorandum package provides, in essence, -to review the Constitution to delete the provision that if the election law has not received 200 votes and upper, then apply to after next elections- and passage of the electoral law in line with the Change Movement.

The same government officials also believe that there are too many reasons to nullify the chances voted a common proposal and end up in the conflict of different political interests.

One reason is, according to them, that KINAL, Investing in strong role for third party, see more gains than losses from the application of the proportional representation or a more proportionate system than the majority.

A second and crucial reason is that the ruling party does not consider "guaranteed" the 180 votes in case of agreement with KINAL to change the controversial article of the Constitution.

This is because the question of "yes" vote in a majority system and by 22 Members of KINAL, while laying the rhetorical question for George Papandreou's stance and Harry Kastanidis.

For implementation of their plan, ND proceed on a law with, B.C., 50 bonus seats for the first party, decisively operates the prevailing view that the government will maintain self-image and widespread acceptance until the time of the next elections.

Involved in drafting the new law, however, executives expect the final decisions of Kyriakos Mitsotakis and consider all possible scenarios for a law that ensures political stability - "and sandwiching the corner SYRIZA" confesses government official, recalling the words of Mr.. Mitsotakis: "If you consider Mr.. Tsipras SYRIZA party power, why not come to discuss another, beyond the proportional, system;».

Experienced politician with many mandates in the parliamentary seats notes, however, a sense that the "author" of an electoral system must take into account all aspects and at various times. It brings as an example the law Kouvelas, passed after the election of the Mitsotakis government 1990.

Law Kouvelas exploited to his advantage PASOK, He managed to boost up 1993 a spectacular way the majority of forces.

had intervened, sure, the Special Court for Andreas Papandreou and the rapid change in the political climate.

The truth is that today's ND leadership oriented in an electoral law that ensures the first political force able of forming self-government with a share of around 35%-36% and over.

Currently not considering adopting "applications" of the German system, monoedrikon other regions, a list or cross.

Insists, Nevertheless, in direct deposit and passage of the bill for the Greeks abroad, which will coincide with the first phase of the debate on constitutional revision.

given characterized, also, the decision of the Maximos Mansion to support the presidential election with 151 MPs, even if they keep their dispute other parties.

Write and erase at the Interior Ministry, preparing the government's final proposal for a postal vote of the Greeks living abroad, which, Nevertheless, It is likely to be relevant in some of them remaining in Greece…

The declared aim, as recently expressed by Interior Minister Takis Theodorikakos, is the government's proposal to get published in October, to follow consultation and training bill.

As though approaching the coming months alternative scenarios multiply, as the discussion onto other provisions of the electoral system that could be regulated by the same bill.

While not lacking those who continue to express reservations about the method of postal vote, ie whether and how to ensure the secrecy of voting.

in any case, according to current knowledge, the system that will be proposed will provide facility provides to those who are registered to vote in order to vote from their place of residence without physical presence.

The electoral rolls currently enrolled about 9.900.000 people. These are those who were born in Greece by Greek parents (automatically entered in the population register), those naturalized by the law and those born abroad by Greeks and reported retrospectively by the Special Registry.

It is understood that the vast majority of the first of the three categories.

Through the Special Registry recorded 2018 about 12.000 people and many of them are newborns, so no direct concern to the electoral process.

Based on the legal population of the official census, Greeks are about 10 millions.

the government, in any case, They appreciate that not all of these people to vote if adopted to facilitate the postal vote.

In the best case is expected to show a number between 300.000 and 400.000 Greeks abroad, which may increase in subsequent elections, if all goes well.

The process starts from the electronic statement a digital platform those interested to vote, or live in Munich or in Melbourne and in Alaska.

Those declared temporarily deleted from the electoral roll and will wait to receive a predetermined amount of time before the election a double envelope.

The outer envelope will include identification of the voter lists and the State parties that have declared.

The inner envelope will place the voter the ballot of their choice and send it together with the outside, attaching and affirmation that there diplopsifizei.

Special committees will receive double envelopes. Will open the outer envelope and if they do everything right, They will take the envelope with the ballot and the ballot box to cast.

To complete this whole process will apply the deadline afternoon of the election on Sunday 7 pm.

Understood how to apply immediately the postal vote will be required by the relevant law to vote in favor of at least 200 MPs.

You also need to extend the deadline for designating candidates deputies.

Today's declaration is 14 days before the election and that time is not enough to print ballots, be sent to all corners of the earth and back in time.

Simultaneously, considered to eliminate the special electoral rolls for military, like eterodimotes in Greece.

But if we apply to them the postal vote, will take the ballots of the particular constituency in which they are registered, not State.

Before it goes out published the final proposal, should be bent and the concerns of those who argue that the postal vote poses security and privacy issues.

The Trikoupi rejects dilemmas and insists on its proposal

The fofi gennimata, both inside and outside Parliament -from the DETH-, has made clear that the Change Movement will insist on implementation of the electoral law has presented details of 2018.

Executives Trikoupi stressed in turn that "Not going to go into negotiation with ND, We reject any blackmailing dilemma associated with the attitude of Mr.. Mitsotakis favor of double elections and recall the statement of Mrs. Gennimata the election campaign that "need 200 votes to change the electoral law "".

Well knowing believe that the leadership of KINAL states that "we will not put the cart before the horse", ie to vote to change the Constitution in Article, because "bet" that Kyriakos Mitsotakis prefers to burn the simple analog with dual elections, perhaps even earlier than the end of four years - which means no count on consultation with KINAL.

The truth is that Gennimata lady propose an electoral system that facilitates the debate on the formation of coalition governments, the logic that the times that the first party has elapsed take rates well above 40%.

As highlighted in May 2018 her team, "Our proposal:

Ensure proportionate representation of political currents and simultaneously promote the consultation between the political forces to form coalition government.

From 50 seats currently bonus for the first party, becomes the upper 35 seats.

indeed linked to the percentage of the first party to be consistent with the will of the people.

From then on again gets the upper bonus 35 seats.

This strengthens the first party to form government, but not excessive as it is today, and the proportional bonus taken into account in premium will of the voters ".