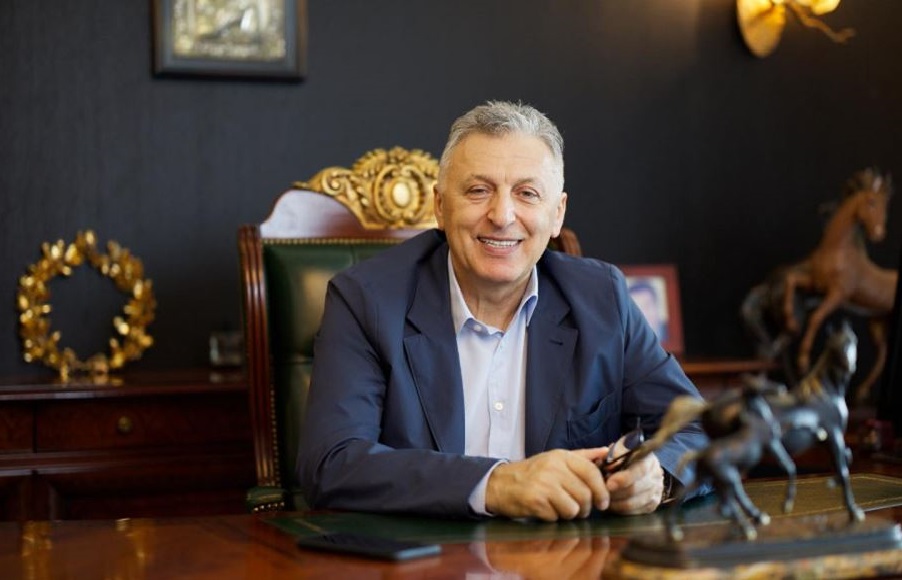 Boris Mouzenidis left you his last breath,of Mouzenidis Travel, the man who took off Greek tourism in Russia. According to reports, died of obstruction due to coronavirus complications, whom he seems to have stuck on a trip to Moscow for a Tourism Fair…….

Mouzenidis Travel, a tourism businessman and president of the Mouzenidis Travel group, passed away in Moscow early Saturday morning., Boris Mouzenidis, one of the dominant figures in the field of inbound tourism from Russia to Greece.

He had been suffering from coronavirus for a week and had mild symptoms. He was rushed to a Moscow hospital yesterday afternoon, where it ended today at dawn. Boris Mouzenidis was facing heart problems. The founder of the Mouzenidis group had traveled to Moscow before 2 weeks for the MITT International Tourism Fair.

With their announcement on the official Facebook page of the group, The management and the employees of the Mouzenidis Group express their deepest sorrow for the loss of Boris Mouzenidis, who was born the 1961. “Our president has always been a source of inspiration for all of us for the work he started and faithfully performed throughout the years of his career.. His love for Greece and his vision give us strength to continue his work” the statement said.

Headquarters of Mouzenidis Travel, from its first steps until today, is the city of Thessaloniki, while, as indicated on its website, “Numerous branches are now operating in various parts of Greece, like Athens, Pieria, Halkidiki, the Peloponnese, Crete, Corfu, Rhodes, Thassos and Zakynthos”.

Theocharis: A man who worked hard for Greek tourism

“Sadness and pain, on hearing the news of the death of Boris Mouzenidis. A man who worked hard for Greek tourism, a pioneer and pioneer in the field. Methodically, stubbornness and hard work realized his vision and created bridges between Greece and Russia. I express my heartfelt condolences to his family and colleagues” the Minister of Tourism states in a statement, Haris Theocharis.

Dimitris Fragakis: A loss for our country and a blow to Greek tourism

On the occasion of the unfortunate death of the founder of the Mouzenidis Group and a great visionary of Greek-Russian tourism, Boris Mouzenidis, the General Secretary of EOT Mr.. Dimitris Fraggakis made the following statement: “The unexpected loss of Boris Mouzenidis is a loss for our country and a blow to Greek tourism. It leaves behind an unfilled gap! I express my warm condolences to his family and associates”.

The course of Boris Mouzenidis and the group

The business course of Boris Mouzenidis could come out of a movie script. Born in Georgia to Greek parents, of Pontic origin, returned to Greece at a time when expatriates from the former Soviet republics were allowed to return to their homeland.

In the early 90s, At the age 31 years, Boris Mouzenidis was looking for a professional way out. Although he had an engineering degree he started working as a waiter and then as a tour bus driver..

Then he decided to open his own office and deal with tourism, starting from Monastiriou Street. Having as an advantage the knowledge of the Russian language and knowing the country well, begins to bring more and more Russian tourists to Greece and not only as it expands to all countries of the Eastern bloc.

Later, as things go better it expands to the center of Thessaloniki, on Olympou Street, founding the Mouzenidis Group. The big business move became the 2013, when he decides to get on charter flights as well, something that strengthened his position as a tour operator.

With Ellinair the airline Mouzenidis Travel becomes predictable “player” in the Tourism market and in the good years came to bring up 1 million tourists in Greece.

The course of the Mouzenidis group

The Mouzenidis group started its activity in 1995, filling in over 25 years in the tourism sector. It is a fully integrated tourism group with activity throughout the tourism chain in the field of travel, through tourist offices, of aviation, of privately owned hotels. The group operates in 16 countries of the particular eastern market with significant shares, connects airline exclusive destinations abroad with Greece and cooperates with 1400 hotel units across the country.

The latest 25 years the group contributes to a growing number of tourists and net exchange in our country and employs a total of 1.700 workers during the summer generating a turnover, on a consolidated basis, near 320 million. euro (except of course last year which was one of the worst for the group).

Ellinair, chaired by Mr.. Giannis Mouzenidis son of Boris, suffered a major blow last year and continues to suffer heavy losses due to the collapse of aviation, was in the pre-pandemic development phase with a turnover above 100 million. euro. The 2019 the airline carried about 1 million. passengers in our country, focusing on the Russian market where the Mouzenidis group has a 25-year presence in the field of travel. The airline of the Mouzenidis group was founded in 2013, based in Thessaloniki and started its activity with the implementation of so planned, as well as chartered flights, with its network of destinations now exceeding 40 cities.

Previous article New President of EPO: Zagorakis is the new President of the EPO!! These are the 11 of the Board!! The former internationals were left out
Next article Coronavirus Disease: 3.133 new infection cases, the 4 in Mykonos - 728 are treated intubated, 72 new deaths
Share
Facebook
Twitter
Pinterest
WhatsApp
Linkedin
ReddIt
Viber
VK
Tumblr
Telegram
Mix
Digg
LINE
Email
Print