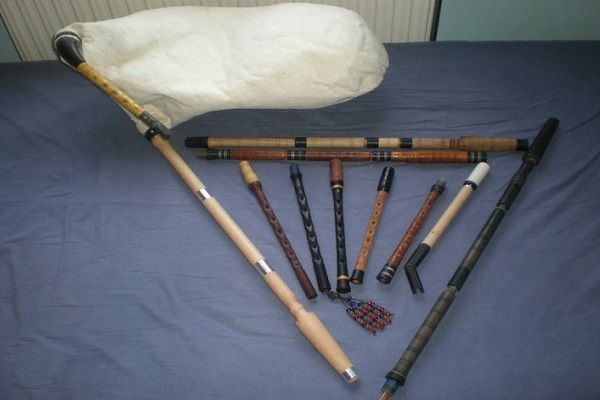 The lover of the bagpipe of Dionysos!!! (25 Videos)

On the ascites or touloumi, usually made from young sheep or goat skin, two wooden flutes secured. The music played before the inflating air sack, which acts as air tank, after blowing on flutes simultaneously playing two tones.

So it's time to introduce you…..

The ancient Greeks as we know were all a story to someone unworthy origin or object. So, there's a myth about bagpipes, Ellinisti marsyaflo or bagpipe or bagpipes. Once upon a time the goddess Athena caught learning channel and began playing near a river.

The Marsyas caught it in the hands of the scrutinized and immediately began to learn. He learned it so well that said competing and playing of Orpheus!

But once they got air minds and began to say that it is better than God Apollo. T’ hears Apollo (god of music gar), gets pissed and says: Put in contest with the Muses judges!! If you lose, I will scratch live. If I do win will immortal.

So begins the contest Apollo playing his lyre and Marsyas channel of. But in the first round came isopallia! So she thinks and says Apollo…the next round I want to sing and Olas! Am come but who is not playing wind instrument and sing at the same time!!!! So Marsyas lost.

Apollo as he, skinned him and threw the pieces of the current Arda, Tountzes and even one who always forget the name of which are tributaries of the river Ebro. It is said that the Thracians synellexan channel and tragoderma of Marsyas and fix the bagpipe.

The word bagpipe is Slavic (guys are huge craftsmen) and means ascites air. The ellinikoteri is pibroch (pouch + lumen) or marsyaflos (Flute of Marsyas) or bagpipe.

Many of you may say what he says is the bagpipe island. Not just as with all closed systems, (cf.. biological systems) the islanders received from neighbors who play instruments like the less influence so keep the name bagpipe.

The word comes bagpipe a series of loans and reborrowing with Italy. It starts from the word agreement (match two sounds and in this Isocrates with gkaintanitsa) they took the Italians were doing symphonia we got back a couple of tsimfonia, They took it back they did tsimponia e and regained back and kamame bagpipe.

It would not be an exaggeration to say that almost all the mainland and island Greece the bagpipe was prominent once. Vlachs, Epirus (cf.. Albanians who are smarter and maintained bagpipe and passes their propaganda), Macedonians, Thracians, Pontiac, islanders all had bagpipes.

The bagpipe composed of the following parts:

1) Since the bag is leather from goat thyliko, because the male very stink, processed and turned the hair from within. Of course you may encounter with the hair outside skins but more rarely.

4) From gkaintanitsa, Pieria and say the flute and the zurna and heard and a grandfather says the singer hold the first name you.

The skin receives the first processing…

It consists of the first two legs and head of the animal.

excoriate, head cut and walk up to a point, kontokourefetai and turn it upside down (hair from within).

Followed by treatment with coarse salt and stipsi (to close the pores and to collect liquids) stays a week or so, and then rub the skin with gialocharto for metal.

Once again salt and stipsi and skin is ready.

Laced underneath and ready.

For better maintenance of the skin when it is ready to kiss the bagpipe colorless plastic bags.

The gkaintanitsa has 8 holes (a rear 7 in front) and comes in the following tonalities:

C, bb (Pieria, which presents particularity in construction in that it is collapsible),

Tonality in gkaintanitsa gives the straw having means (otherwise piskiouli) which is reed (more traditional) or other materials (now use much Panic and plastic and / or coupled by straw from clarinet).

A variety of wood have been tested for the construction of the bagpipe. The old used much dogwood (Evros) and pixari (Pieria)…. Although some standards still retained can not despise the olive, the almond tree, ebony, the rosewood, cherry, honey etc.. Κωνοφόρα δέντρα αποκλείονται λόγω ύπαρξης πολλών πόρων.

From left to right are: Re ebony, La almond with lid Olive, La-Bb ebony (the tune in Bb now), iii Amygdalia, Still not tune the next but is about I Do dogwood (Pieria) or is next pixarisia Pieria even akourdisti, and the next one Hey from Bulgaria I have no idea of ​​the wood is.

The bagpipe has an area of ​​about one octave, and we can play in it the following scales: Minore, Maggiore, Chitzaz, Usak (more rarely use), and Pentatonic. But only one tone per gkaintanitsa.

Not that you can have a gkaintanitsa D and La Major and D Major, one of two. For more advanced players you can play the bagpipes from low so comes another Major-minor-scale chitzaz, but it requires skill in closing the holes to get out some time.

namely, a re gkaintanitsa, from below contains a taking range. To make it more understandable you post them a score that I made, and a photo illustrating parts of gkaintanitsas.

The bagpipe is special in that it can not be played as an instrument with tempered intervals… It is very difficult to tune and just all holes properly a gkaintanitsa.

Always, these differences from player to player, We will lose some points in playing. It is possible that someone with a bagpipe playing normally while another gkaintatzis to sing out of tune because it is accustomed to give other pressures on the instrument.

Generally the pressure within the bag must be kept constant and this is accomplished either by the air entering from fysari, or by the pressure of the arm.

The way in which play differs from the flute and the clarinet is special (gkaintisia are saying) technique that is learned over time and can not explain to someone just by speech.

From region to region but we find differences. Pieria play different and more similar to the flute.

The trills play a lot and made the short tripoula above but with the other fingers, accordingly piece. There is also a feature “bik-bik” with the back hole.

Please also note that the sound is directly influenced by outside pressure and ambient humidity, so it is a difficult body for tuning. In short then you need tuning.

The tuning is achieved by teasing the straw and opening or closing the holes with natural wax. A good player must not only play “γαιντίσια” but also to know how to wind it properly.

Also say that now began to spread the bagpipes and festivals are organized. From the largest being:

As often is the question, “you are scottish and you play bagpipes;”, We will analyze the differences between the bagpipe.

-The Scottish and Irish from the Greek

The Irish bagpipe has first bellows (and so a corresponding ougkareziki I had ever seen) by means of which the bag is filled, longer chanter (gkaintanitsa) and bearing and keys.

The Scottish except that it dressed with cloth to avoid skin shows up.

It looks pretty, but there is a difference in style…and straw which is Scottish like zournatzidiko straw and therefore the things on the Scottish bagpipe is particularly not like ours…

Far more heterogeneous than the bagpipe mainland Greece since not Isocrates, and their gkaintanitsa, It comprises two parallyla rods ending in a funnel, horn usually.

They have five holes in front and one behind, not Isocrates. It also differs in fysari, It is narrower. When playing it is possible both lumens to play melody or a melody plays and the other holding equal.

askomantoura the They say in Crete, bagpipe generally say the islands, Tulum and the Pontus say.

The Macedonian bagpipe it looks like the Greek Pieria, is folding the edge.

Almost identical to the Greek. General and bagpipe playing and Bulgarian is more staccato and looks more like a clarinet rather than vice versa as in Greece.

The only other Bulgarian bagpipe that one can find is from the mountains of Smolen in Rhodopes (Gajda rodopka) which is big split and has much bass sound (comes in MI and FA).

In Greece believed by klaritzides of Macedonia gkaintisia that the more you play the more you're good klaritzis.

From my involvement with the object, in addition to the above I have also found…Croatian bagpipe, Hungarian, Spain-Mallorca, Southern Italy, Romania and Turkey…As you can see, it's everywhere!!!

Worth and suggest you see the gentleman who has made a KABA GAJDA self-construction with double holes to increase the possibilities of!